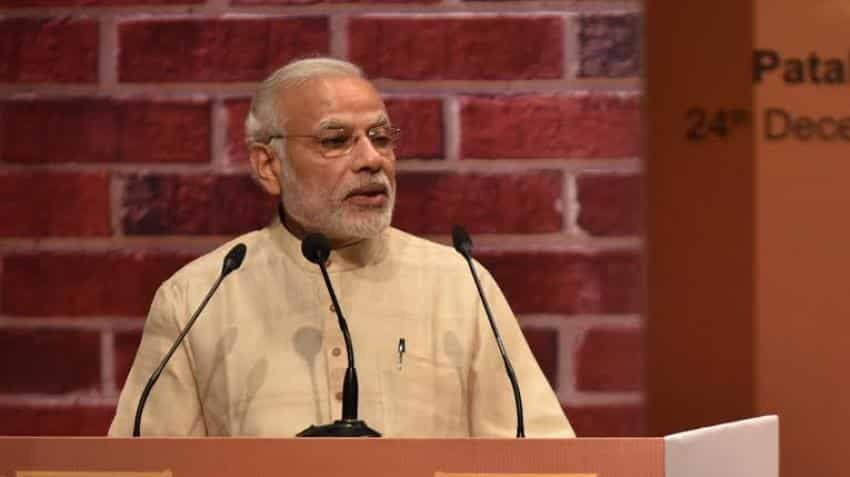 Prime Minister Narendra Modi, who is one a day long visit to Maharashtra state, on Saturday while inaugurating new campus of National Institute of Securities Markets (NISM) at Patalganga in Mumbai emphasised on the need for the stock markets participants to be well-informed about the markets products they are investing money into.

The prime minister expressed the government's willingness to support the start-up ecosystem in the country.

Here's the full text of his speech:

It is a pleasure for me to be here today to inaugurate this new campus. This is a time of slowdown in the global economy. Developed countries and emerging markets are both facing slow growth. Against this background, India is being seen as a bright spot. Growth is projected to remain among the highest in the world.

India’s place as the fastest growing large economy has not come about by accident. To see how far we have travelled, we should look back to 2012-13. The fiscal deficit had reached alarming levels. The currency was falling sharply. Inflation was high. The current account deficit was rising. Confidence was low and foreign investors were turning away from India. India was considered the weakest of the BRICS nations.

In less than three years, this government has transformed the economy. We have cut the fiscal deficit target every year and also achieved it every year. The current account deficit is low. Even after the redemption of loans taken under the special currency swap in 2013, foreign exchange reserves are high. Inflation is low, running at less than 4 per cent compared to double digit inflation under the previous government. Public investment has increased largely, even while the overall fiscal deficit has been cut. A new monetary policy framework has been introduced by law with an inflation target. The Constitutional Amendment on Goods and Services Tax (GST) had remained pending for years. It has been passed and the long awaited GST will soon be a reality. We have made progress on improving the ease of doing business. As a result of all these policies, Foreign Direct Investment has reached record levels. By claiming that demonetisation has stopped a fast moving car, our critics too have acknowledged the speed of our progress.

Let me make one thing very clear: This Government will continue to follow sound and prudent economic policies, to ensure that India has a bright future in the long run. We will not take decisions for short term political point scoring. We will not shy away from taking difficult decisions, if those decisions are in the interest of the country. Demonetisation is an example. It has short term pain but will bring long term gain.

Financial markets can play an important role in the modern economy. They help in mobilizing savings. They channel the savings towards productive investments.

However, history has shown that financial markets can also do damage, if not properly regulated. It is to ensure good regulation that the Securities and Exchange Board of India, - SEBI - was established by the Government. SEBI also has a role to promote the development of healthy securities markets.

Recently, the Forward Markets Commission has been abolished. SEBI has been given the task of regulating commodity derivatives also. This is a big challenge. In the commodity markets, the spot market is not regulated by SEBI. Agricultural markets are regulated by states. And many commodities are purchased directly by the poor and the needy, not by investors. Hence the economic and social impact of commodity derivatives is more sensitive.

For financial markets to function successfully, participants need to be well informed. I am happy to note that the National Institute of Securities Markets (NISM) is performing the role of educating various participants and providing skill certification. Today, our mission has to be a `Skilled India’. Indian youth should be able to compete with their counterparts in any corner of the world. This institute has a vital role to play in such capacity building. I have been told that around one lakh fifty thousand candidates undertake examinations of NISM every year. More than five lakh candidates have been certified by NISM till date.

India has earned a good name for its well-regulated securities markets. The spread of electronic means of trading and the use of depositories have made our markets more transparent. SEBI as an institution can also take pride in this.

However, there is still a long way to go for our securities and commodity markets. When I see the financial newspapers, I often read about the success of IPOs and how some smart entrepreneur has suddenly become a billionaire. As you know, my government is very keen to encourage start-ups. Stock markets are essential for the start-up ecosystem. However, it is not enough if the securities markets are considered as successful by international investors or financial experts. Wealth creation is good, but for me that is not the main purpose. The real value of our securities markets lies in their contribution

• to the development of the nation,
• to the improvement of all sectors and
• to the welfare of the vast majority of citizens.

So, before I can consider financial markets to be fully successful, they have to meet three challenges.

Firstly, the primary aim of our stock market should be to help in raising capital for productive purposes. Derivatives have a use in managing risk. But many people feel derivatives are dominating the markets and the tail is wagging the dog. We should ponder as to how well the capital market is performing its main function of providing capital.

You are all aware of the huge capital requirements for improving urban infrastructure. This government has launched an ambitious Smart Cities programme. In this context, I am disappointed that even now, we do not have a municipal bond market. There will be problems and difficulties in creating such a market. But the true test of an expert innovation is when it solves a complex problem. Can SEBI and the Department of Economic Affairs ensure that at least 10 cities in India issue municipal bonds within one year?

Secondly, the markets must provide benefits to the largest section of our society — namely our farmers. The true measure of success is the impact in villages, not the impact in Dalal Street or Lutyens’ Delhi. By that yardstick, we have a long way to go. Our stock markets need to raise capital in innovative ways for projects in agriculture. Our commodity markets must become useful to our farmers, not just avenues for speculation. People say that derivatives can be used by farmers for reducing their risks. But in practice, hardly any farmer in India uses derivatives. That is the fact. Unless and until we make the commodity markets directly useful to farmers, they are just a costly ornament in our economy, not a useful tool. This Government has introduced e-NAM – the electronic National Agricultural Market. SEBI should work for closer linkage between spot markets like e-NAM and derivatives markets to benefit farmers.

Thirdly, those who profit from financial markets must make a fair contribution to nation-building through taxes. For various reasons, the contribution of tax from those who make money on the markets has been low. To some extent, it may be due to illegal activities and fraud. To stop this, SEBI has to be extremely vigilant. To some extent, the low contribution of taxes may also be due to the structure of our tax laws. Low or zero tax rate is given to certain types of financial income. I call upon you to think about the contribution of market participants to the exchequer. We should consider methods for increasing it in a fair, efficient and transparent way. Earlier, there was a feeling that some investors were getting an unfair deal by using certain tax treaties. As you know, those treaties have been amended by this government. Now it is time to re-think and come up with a good design which is simple and transparent, but also fair and progressive.

I know that financial markets attach a lot of importance to the budget. The budget cycle has an effect on the real economy. In our existing budget calendar, the authorization of expenditure comes with the onset of the monsoon. Government programmes are not active in the productive pre-monsoon months. Hence, this year, we are advancing the date of the budget so that expenditure is authorized by the time the new financial year begins. This will improve productivity and output.

My aim is to make India a developed country in one generation. India cannot become a developed country without world class securities and commodity markets. Therefore, I look forward to a growing contribution from all of you in making the financial markets more relevant to this new era. I wish the NISM all success. I also wish everybody a merry Christmas and a very happy new year.