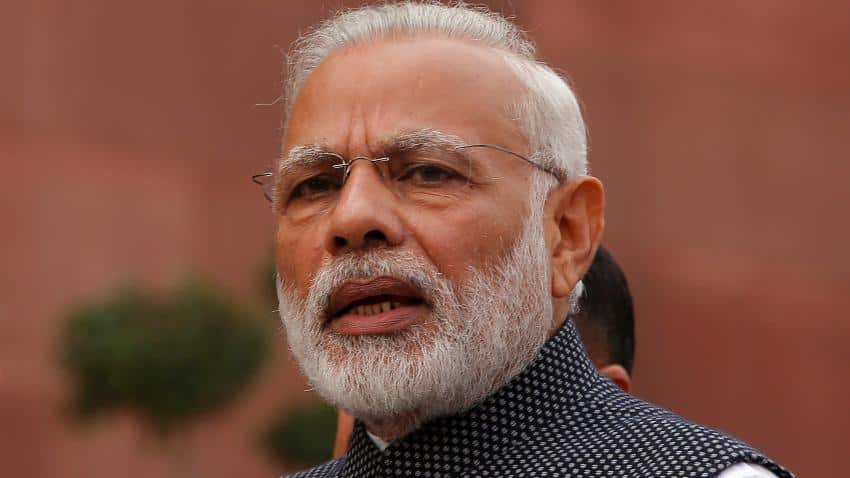 PM Narendra Modi will land in the metropolis at 11:30 am and leave for MIDC Patalganga in neighbouring Raigad district where he will inaugurate the newly-built campus of the National Institute of Securities Management. Image Source: Reuters
Written By: PTI
RELATED NEWS

Prime Minister Narendra Modi will be on a day's visit to Maharashtra on Saturday, where he will lay foundation stone for the grand memorial of Maratha warrior king Chhatrapati Shivaji Maharaj and the metro rail projects in Mumbai and Pune.

Modi will land in the metropolis at 11:30 am and leave for MIDC Patalganga in neighbouring Raigad district where he will inaugurate the newly-built campus of the National Institute of Securities Management.

The PM will then reach Raj Bhavan and later move towards Girgaum Chowpatty for the Shivaji Memorial event.

He will proceed to the site in the Arabian Sea off Mumbai coast, where the state government is planning to build a mega memorial for Chhatrapati Shivaji Maharaj.

The Prime Minister's visit assumes political significance as the high-stake elections to Brihanmumbai Municipal Corporation (BMC) are just a few months away.

The main feature of the Shivaji memorial, slated to cost Rs 3,600 crore, will be a 192-metre-tall statue of the iconic Maratha king. The site is a rocky outcrop, roughly 1.5 km from the Raj Bhavan shore.

Chief Minister Devendra Fadnavis recently said the 'Shiv Smarak' will not only be the tallest memorial in the country, but in the entire world. He had thanked Modi for "making it possible."

Shiv Sena president Uddhav Thackeray, whose party is an ally of ruling BJP, is expected to share the dais with Modi at the MMRDA event.

The PM will then leave for Pune, where he will lay the foundation stone of the Pune Metro Rail project at the Agriculture College ground there. NCP leader Sharad Pawar will share the stage with Modi at this event.

The memorial project has been facing stiff opposition from fisherfolk and environmentalists, who have alleged that it would affect marine life and ecology of the Arabian Sea.

For the MMRDA event, the government has sent out invitation to over 3,000 VVIPs and dignitaries, including members of the royal family and Shivaji historians.

Ever since it came to power in Maharashtra in October 2014, BJP has been quietly trying to usurp the near-monopoly that bickering ally Shiv Sena has held over the 17th century Maratha king for the last many years.

Ahead of the Maharashtra Assembly election in 2014, BJP had used the name of Chhatrapati Shivaji for electoral gains, with a famous tagline seeking to evoke Shivaji's blessings.

The government and BJP are trying to make the memorial event a success with hoardings at important places of all districts and also through campaigns in print, TV and social media.