While the fuel rates have been freed from government control, there is no doubt in anyone's mind that it can ask oil companies to freeze or roll-back prices. However, what it can definitely do is reduce the excise duty on the fuels. Alternatively, it can bring the two fuels under the ambit of goods and services tax (GST). 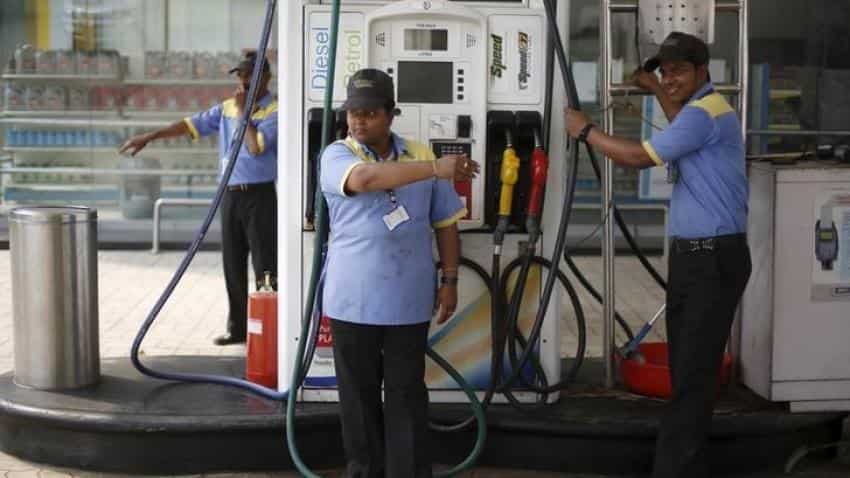 Sky-rocketing prices of petrol and diesel that reached the mark of Rs 76.87 a litre and Rs 68.08 a litre respectively on Tuesday have become a matter of great concern for all concerned. The issue has led to raging debates especially on what is stopping the government from taking action to contain the price rise. While the fuel rates have been freed from government control, there is no doubt in anyone's mind that it can ask oil companies to freeze or roll-back prices. However, what it can definitely do is reduce the excise duty on the fuels. Alternatively, it can bring the two fuels under the ambit of goods and services tax (GST).

However, economic rationalisation of the same suggests that there are massive constraints, like financial losses, that are not allowing the government to make a decision on containing the prices and thereby give relief to the common man. Also, bringing petrol and diesel under the ambit of GST will make the states suffer as their maximum earnings are based on VAT/Sales Tax/Cess, which are levied through petrol and diesel.

The government is saying that that it is considering several options to bring relief to the consumers. However, the question remains unanswered as to what form it will acquire and whether it will yield a permanent solution or if it will bring new challenges. So, we look at the alternatives available to the Centre and and the challenges thereof:

1. The government can reduce or cut the excise duty and pass on its benefit to the end consumer but this reduction may not last for a long time as the daily increase maybe by 10-20 paise will allow the prices to reach the old level in some days.

Challenge: A deduction of 1 rupee per litre in excise will lead to a loss of about Rs 15,000 crore to the exchequer. Is the government ready for it?

Challenge: If the prices do not go down for a long time then a condition of under-recovery will arise as the marketing margins went down to one fourth after the prices were not increased for 19 continuous days during Karnataka election.

3. The Centre can pressurise the states to cut the VAT and give immediate relief to the consumers. It is not to difficult for the government at least when 21 states are being ruled by the NDA, the coalition led by BJP that is heading the central government. By doing so, Centre may create pressure on other states being ruled by other parties to go for it too.

Challenge: State Governments rely heavily on the revenue generated by petrol diesel for their revenues and at present, they are already facing financial losses and any cut in the VAT will lead to their earnings getting reduced. Reduction in revenues will have a negative impact on those schemes of Centre in which states are financial partners. Is the government ready to take the risk in an election year?

Challenge: The biggest question on this option is whether this increase in duty on petroleum exports could bear the pressure of losses that will be incurred by reducing the excise duty? Will the petroleum products will not turn up to be expensive in those countries?  Will it not affect its international relations?

Challenge: This route goes through GST Council because most of the by-products fall under the ambit of the GST. The question that arises is will the states agree with the proposal? Will the proposal not have an effect on GST collections?

6. The government may pressurise the OPEC nations to keep the prices under control. In fact, the government is also trying to do so and in this regard, the petroleum minister, earlier, has had a discussion with these countries.

Challenge: Pressuring the OPEC nations will not bring any positive results at least till December 2018 as some companies functional in these OPEC nations have planned to launch their IPOs in the year and for the same they just want to increase the prices. On the other hand,  Russia and Saudi Arabia are working on a long-term pact that could extend controls over world crude supplies by major exporters for many years to come just to lift prices.

7. India can coordinate with big Asian consumers like China and Japan and persuade them to reduce their consumption for some time so that they can pressurise the oil-producing nations. At the same time, all these nations together can ask for an Asian Premium.

Challenge: The biggest question that props up is that is it reasonable to impose huge taxes on the commodity, 80 per cent of which is being imported?

The central and state governments are heavily dependent on the revenue generated by the petroleum products. Can the two governments be able to provide a permanent relief to the consumers without removing it? Can the problem be sorted out by changing the tax structure, this means bringing the two fuels under the ambit of GST.

Finally, who really regulates the refining and marketing margins of the oil companies? The sector's regulator still has no right to fix prices. So, how can one ensure that the prices decided by these companies are correct and have been transparently fixed?