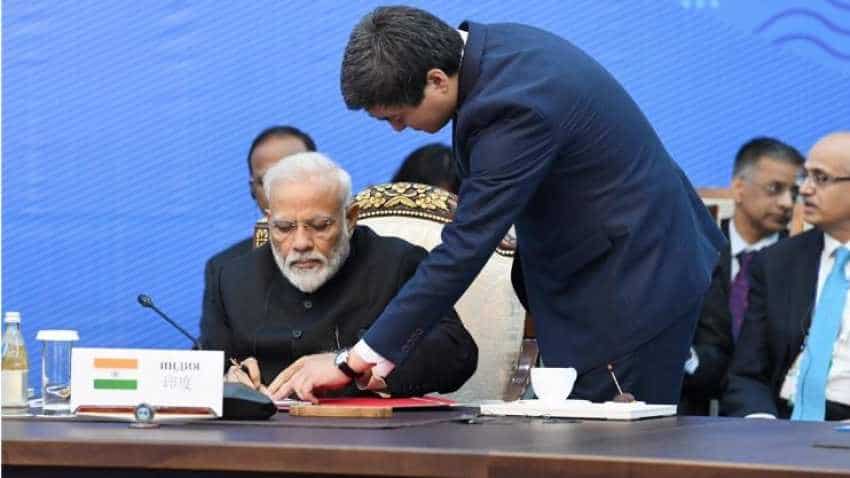 PM Modi at SCO Summit Bishkek: Prime Minister Narendra Modi today lashed out at countries "sponsoring, aiding and funding" terrorism. In a veiled reference to Pakistan whose premier Imran Khan was among the audience, PM Modi told top leaders at SCO Summit in Bishkek that such states must be held accountable. In a first, PM Modi also called for a global conference to combat the scourge of terrorism. The prime minister highlighted the spirit and ideals of the SCO to strengthen cooperation in the fight against
terrorism.

"Countries responsible for aiding, supporting and providing financial assistance to terrorists should be held accountable. SCO members should also effectively explore the capacity of SCO-RATS to eliminate terrorism. India calls for an international conference to combat terrorism,"  PM Modi said.

PM Modi recalled the recent terror attacks in Sri Lanka. He said, "During my visit to Sri Lanka last Sunday, I visited the St Anthony's church, where I witnessed the ugly face of terrorism which claims the lives of innocents anywhere," the Prime Minister said. St Anthony's church was one of the sites of the devastating Easter Sunday attacks that killed 258 people in Sri Lanka.

At the #SCOSummit2019 PM @narendramodi calls for collective action against terrorism pic.twitter.com/6hnBIoABiF

PM Modi said that countries will have to come out of their narrow purview to unite to combat the menace of terrorism. Russian President Vladimir Putin, Chinese President Xi Jinping, Pakistan Prime Minister Khan and Iran President Hassan Rouhani were in the audience during PM Modi's speech.