P Chidambaram arrested by CBI at home in INX case

Senior Congress leader and former Finance Minister P Chidambaram, who has been eluding the CBI and ED, was arrested on Wednesday evening after an hour-long drama outside his Jor Bagh residence in New Delhi. 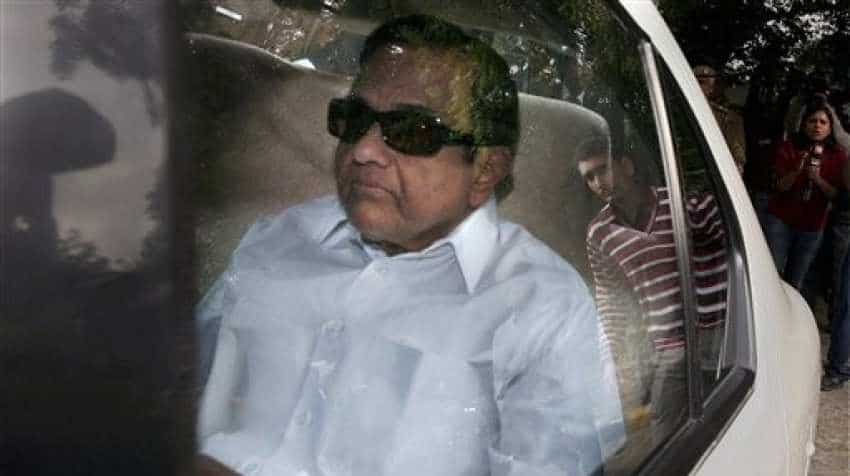 Chidambaram appeared at the party headquarters, hours after his petition challenging the Delhi High Court rejection of anticipatory bail was not listed in the Supreme Court. Photo: Reuters
Written By: IANS
RELATED NEWS

Senior Congress leader and former Finance Minister P Chidambaram, who has been eluding the CBI and ED, was arrested on Wednesday evening after an hour-long drama outside his Jor Bagh residence in New Delhi. The Central Bureau of Investigation (CBI) said on Wednesday that former Union Minister P. Chidambaram was arrested on the warrant issued by the competent court. The IANS sources said that he will be produced in the Prevention of Money Laundering Act (PMLA) court on Thursday. A team of senior CBI officers was present at the headquarters awaiting Chidambaram who had been "missing" since Tuesday. The officials said that other formalities like a complete medical examination would be carried out during the night. The Delhi Police personnel blocked the entry to CBI headquarters and additional forces were deployed around the building to regulate the movement of traffic.

Chidambaram on Wednesday evening dramatically surfaced at the Congress headquarters.He appeared at the party HQ hours after his petition challenging the Delhi High Court rejection of anticipatory bail was not listed in the Supreme Court. In the morning, a Supreme Court bench headed by Justice NV Ramana refused to grant interim relief from arrest to Chidambaram and referred his plea for anticipatory bail in the INX media case to Chief Justice Ranjan Gogoi for urgent hearing.

Chidambaram has challenged the Delhi High Court order which rejected his anticipatory bail plea on Tuesday. On January 25, the Delhi High Court reserved order on Chidambaram's bail plea in the case being probed by the Enforcement Directorate and the Central Bureau of Investigation (CBI). The agencies had opposed Chidambaram's bail plea, saying his custodial interrogation was necessary as he was evasive during questioning.

The ED and the CBI are probing how his son Karti Chidambaram got clearance from the Foreign Investment Promotion Board (FIPB) in 2007 when Chidambaram was the Finance Minister. Karti Chidambaram was arrested on February 28, 2018 by the CBI for allegedly accepting money to facilitate the FIPB clearance to INX Media. He was later granted bail. His chartered accountant S. Bhaskararaman was also arrested and released on bail.

Chidambaram said he was "not hiding from the law but seeking protection of the law".

He said he would wait till Friday, when the Supreme Court had decided to hear his plea against his arrest.

After the presser, Chidambaram left the Congress headquarters for his home in Jor Bagh, Delhi. Along with him were senior lawyers Kapil Sibal, Abhishek Singhvi and other Congress leaders.

However, a 7-member CBI team reached Chidambaram's home and, since the gate was closed, they had to jump over teh boundary wall to reach the door.

Chidambaram was arrested by the CBI in a swift operation on Wednesday night, minutes after he reached his Jor Bagh home. While being taken away, Chidambaram was seated in the middle of a white car with CBI personnel sitting on either side as he was driven straight to the agency`s headquarters, located barely a few kilometres away from his house.

Sources said CBI Director Rishi Kumar Shukla himself was present at the headquarters along with top officers for the questioning of former minister. After completing the formalities, Chidambaram was arrested and will be produced in court on Thursday.

May 15, 2017: The CBI registers an FIR, alleging irregularities in Foreign Investment Promotion Board (FIPB) clearance to INX Media for receiving overseas funds to the tune of Rs 305 crore in 2007 when Karti Chidambaram`s father P. Chidambaram was the Union Finance Minister.

June 16, 2017: The Foreigner Regional Registration Officer (FRRO) and the Bureau of Immigration, which comes under the Union Home Ministry, issues a look out circular (LOC) against Karti Chidambaram.

August 10, 2017: The Madras High Court stays the LOCs issued against Karti Chidambaram and four others.

August 18, 2017: The Supreme Court asks Karti Chidambaram to appear before the CBI on August 23.

September 22, 2017: The CBI tells the Supreme Court that Karti Chidambaram was prevented from travelling abroad as he was allegedly closing several of his foreign bank accounts in a bid to destroy evidence.

October 9, 2017: Karti Chidambaram seeks the Supreme Court`s nod to travel to Britain to get his daughter admitted at an university and expresses willingness to undertake that he would not visit any bank there. P. Chidambaram tells the Supreme Court that the BJP-led government has been carrying on a politically-motivated vendetta against him and his son.

December 8, 2017: Karti Chidambaram moves the Supreme Court challenging the summons issued by the CBI against him in the Aircel-Maxis deal case.

February 16, 2018: Karti Chidambaram`s CA S. Bhaskararaman arrested for allegedly assisting him to manage his wealth in India and abroad.

February 28, 2018: Karti Chidambaram arrested by CBI at Chennai airport soon after his arrival from abroad and brought to Delhi.

October 11, 2018: The ED attaches assets worth Rs 54 crore of Karti Chidambaram in India, UK and Spain in connection with the INX Media money laundering case. P. Chidambaram describes the ED action as bizarre.

July 11, 2019: Jailed Indrani Mukerjea turns approver in the case and accepts the conditions put on her before a judge.