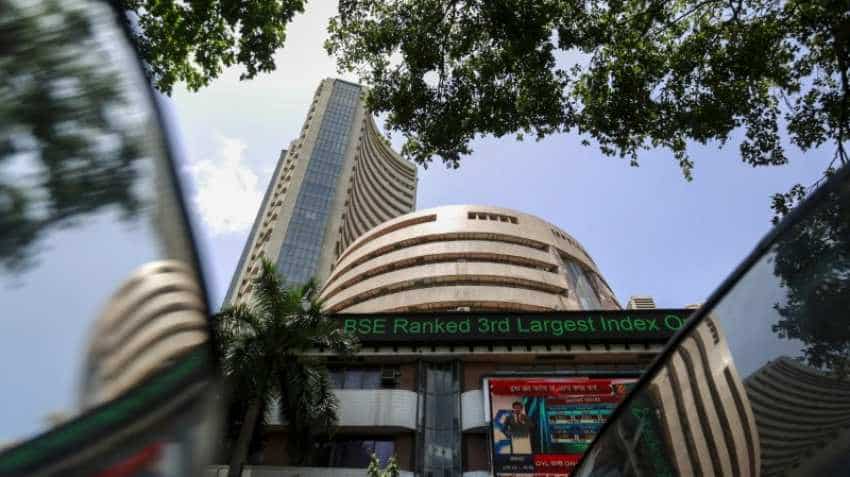 3.55pm: BJP has faced big setbacks in Chhatisgarh and Rajasthan. As of now, the party is trailing Congress by big margins. In Chhattisgarh, Congress is leading on 62 of 84 seats and 102 of 199 seats in Rajasthan, as per official Election Commission data.

In Telangana, K Chandrasekhar Rao's TRS is leading on 79 of 119 seats, while in Mizoram, the Mizo National Front (MNF) is set to end Congress rule by leading on 26 of 40 seats.

In Madhya Pradesh, Congress is currently leading on 115 seats, while the BJP is leading on 105 seats.

3.43 pm: Markets closed! The election result trends have failed to effect the stock markets today. After falling over 500 points at the start of the day, the Sensex bounced back, closing at 35,150, which is 190.29 more than yesterday. Nifty also closed 60.7 points higher at 10,549.

3.20 pm: Stock market has defied predictions of a bloodbath. After the resignation of RBI governor Urjit Patel on Monday, it was expected that uncertainties at the top of central bank may spill to the markets also. Currently, the Bombay Stock Exchange (BSE) has is 205.5 points up from yesterday's closing number. Early in the day, BSE had witnessed over 500 point slump.

02.23 pm: BJP has won its first seat in Madhya Pradesh. It continues to lead in the state. Congress ahead in Rajasthan, Chattisgarh. Telangana goes to TRS.

13.30: Both sensex and the Nifty are in the green at present, after initial fall. BSE is at 35,055.48, while Nifty is at 10,523. Both Congress and BJP are still in neck and neck competition in Madhya Pradesh. In Rajasthan, Congress is leading by a big margin.

12.51 pm: Each minute the markets are getting tensed as the counting in assembly elections show 'ache din' not coming for BJP. What has happened is that both Sensex and Nifty are on hotbed by losing more than 500 points and 150 points respectively, as exit polls indicated that Prime Minister Narendra Modi government will not see a big win in these assembly elections whose votes are being counted at present. READ MORE

12.27 pm: TRS MP K Kavitha reacts: "The losing party always says the EVMs have been tampered with, this is absolutely false. Even the CEC in a press meeting yesterday said that it is not possible to tamper EVMs. People have given victory to TRS, what Congress is claiming is false."

12.17 pm: Home Minister Rajnath Singh reacts: "Nothing is yet clear from the trends. Congratulations to the MLA candidates and the political parties that are winning. But Mahagathbandhan has failed terribly in Telangana"

12.10 pm: Sensex and Nifty are again in the Red. Election counting trends show the Congress leading again in Madhya Pradesh. In other four states, the winners are almost certain. 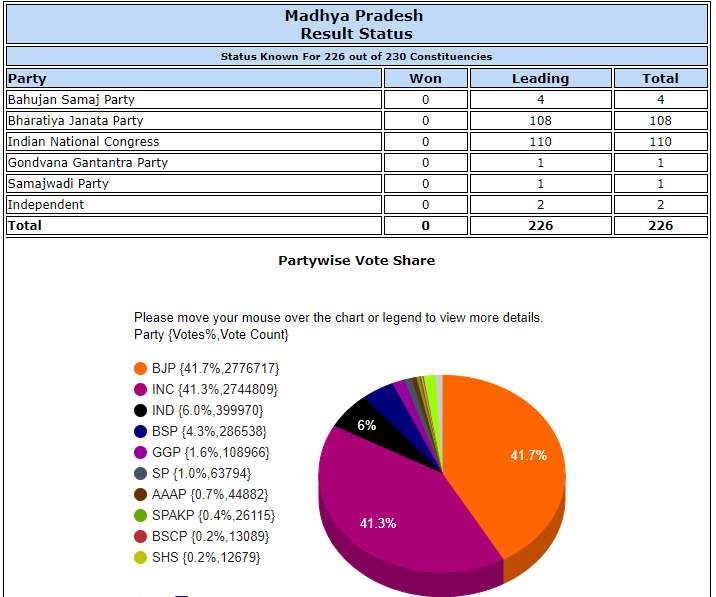 11.56 am: Official ECI trends: Congress leading on 99 seats, BJP leading on 79 seats, BSP on 2, CPM on 2 and others on 16 seats in Rajasthan. Saroj Pandey, BJP national general secretary & MP from Durg (Chhattisgarh), tells ANI, "We can't say anything after only 1st round of counting. We hope to form the government in Chhattisgarh. It's a very close fight."

11.42 am:  BJP makes surprise comeback in Madhya Pradesh. Now, leads in 116 seats; Chhattisgarh is set to go to Congress.

11.29 am: Even as election counting is own and the sensex is fluctuating, PM Modi seems to be in a rush to announce Urjit Patel replacement today. Centre is set to take a decision on the next governor's name today itself. Finance Secretary AN Jha told ANI that the Centre will take a decision today in the matter. READ MORE

10.39 am: 3-0! Congress is leading in three BJP-rules states of Madhya Pradesh, Chhatisgarh and Rajasthan. If the trend continues, this will be a big setback for the BJP ahead of Lok Sabha elections 2019.

10.28 am: Assembly Election Results 2018: Petrol, diesel prices cut for sixth straight day. Petrol, diesel prices have again come down on the sixth straight day in the wake of the softening of international crude oil prices. Petrol in Delhi today costs Rs 70.31 a litre and diesel is priced at Rs 64.82 per litre, according to state-owned oil firms' price notification. READ MORE 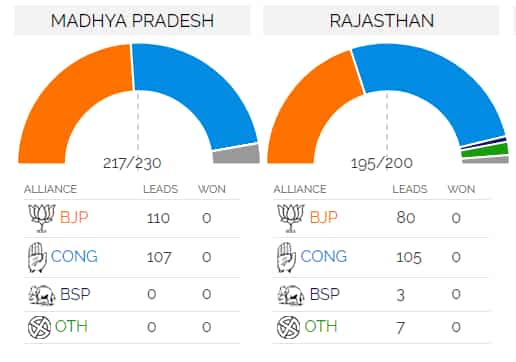 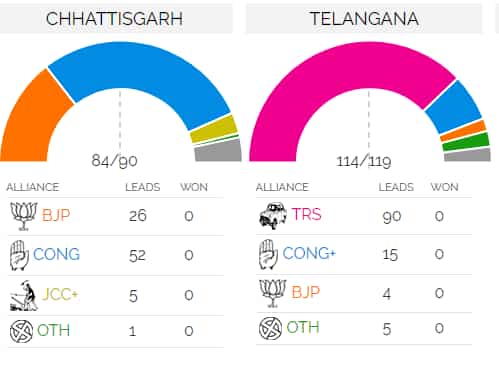 9.58 am: BJP looks set to lose in Rajasthan; Congress continues to maintain lead in the state.  The Congress is leading in 61 seats, while the BJP is ahead in 45 seats in the 200-member Rajasthan Assembly, according to the state election commission's website Tuesday.

9.25 am: Election Results: Sensex loses cool, crashes by over 400 points; BJP behind in Rajasthan, MP

9.08 am: Experts say that the market will not read too much into the election results.

Impact of RBI Governor resignation:
Nifty and Bank Nifty can go down by 150-200 points and 500-700 points respectively.
Rupee to weaken by approximately 2 per cent.

8.25 am: Nothing seem to boost Indian market today, considering a host of action that took place in previous days. While everyone is sitting with bated breath to who will be elected in the assembly election held in five states, as the outcome will be annouonced today. Just a day ahead of the election a blow was sent out for both investors and market, as RBI governor Urjit Patel has submitted his resignation from his post. Hence, nothing seems optimistic in trading in Dalal Street today. READ MORE

8.20 am: Counting has started in five states that went to Assembly elections.