Lok Sabha election results 2019: The final results of the just-concluded Lok Sabha polls will be out on May 23. 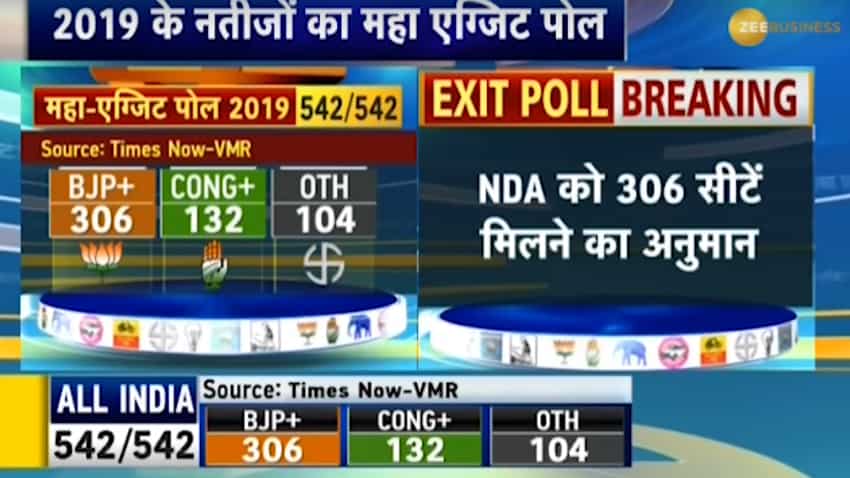 Lok Sabha election results 2019: In the states, most of the surveys predict a BJP or NDA sweep in states like Rajasthan, Gujarat, Madhya Pradesh, Delhi and Bihar.
Written By: ZeeBiz WebTeam
RELATED NEWS

Lok Sabha election results 2019: The final results of the just-concluded Lok Sabha polls will be out on May 23. The seventh and last phase of the polls concluded Sunday with polling in several states. While the opposition parties expected to put up a good show against the ruling BJP-led NDA government, the exit poll predictions have dashed their hopes to some extent. However, exit poll results are not always correct. So, one would have to wait till May 23 to get the real picture. In case, the exit poll results do get right this time, here is what to expect for the BJP-led NDA, Congress and others, as per surveys:

In the states, most of the surveys predict a BJP or NDA sweep in states like Rajasthan, Gujarat, Madhya Pradesh, Delhi and Bihar. The BJP is also expected to make big gains in West Bengal, Odisha and in North East. The surveys predict a bleak future ahead for the Congress and other opposition political parties.

Most of these surveys show the BJP-led NDA is set to return to power. Zee Business 'Maha Exit Poll' predicts around 285 seats for the NDA. A political party, or a coalition of parties, needs 272 seats to for the government. If all these exit polls get right, you can expect Prime Minister Narendra Modi to return to power and take oath within a few days after May 23.