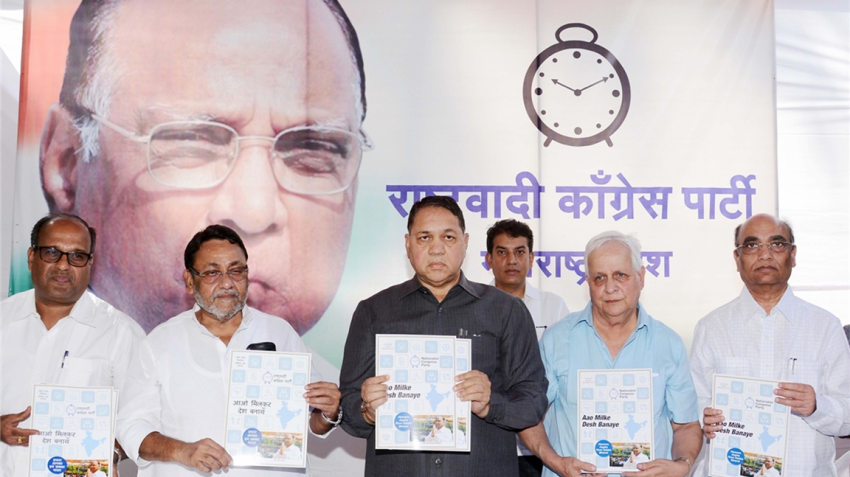 Lok Sabha election manifesto 2019: Weeks before the first phase of Lok Sabha election kicks off, the Nationalist Congress Party (NCP) has released its election manifesto, promising complete loan waiver for small and middle-income farmers. The party has also assured resumption of talks with Pakistan. The NCP manifesto was released in Mumbai. On the occasion, party general secretary and chief spokesperson D P Tripathi said NCP will to bring radicalised youth of Kashmir Valley into the mainstream and take stern action against those involved in 'brainwashing' them. NCP is fighting the elections in alliance with the Congress in Maharashtra.

NCP, led by Sharad Pawar, is contesting on 20 seats in Maharashtra, and one each in Laskhadweep, Bihar, Odisha, Meghalaya and Manipur. News agency PTI quoted Tripathy as saying, "According to figures from various organisations working in rural areas, over 90,000 people have committed suicide in the hinterland, of which majority are farmers. We will provide a complete loan waiver to the small and medium income farmers."

The NCP manifesto also talks about carrying out structural reforms to drive sustainable agriculture. In foreign affairs, NCP said its government will work to prevent the Russians from getting too close to China and Pakistan by frequent high-level exchanges. It will also continue to expand ties with the United States. In the defence sector, NCP has assured to modernise the Hindustan Aeronautics Limited (HAL) and ordnance factories along with setting up an ex-servicemen commission. On how the NCP will be able to execute its promises when it is not even contesting more than 30 seats in the 545-member Lok Sabha,

Tripathi said his party will be a part of the next non-BJP government and influence policy-making. Meanwhile, the big two national parties - BJP and Congress, are yet to release their manifestos.

The Congress party is expected to a right-based path that may include promises on guaranteed minimum income, complete farm loan waiver, guaranteed minimum support price to farmers and jobs to the unemployed youths. Congress president Rahul Gandhi has promised to implement the NYAY scheme for minimum income guarantee. Under the scheme, if Congress comes to power, Gandhi has promised to grant Rs 6000 every month (Rs 72,000 annually) to the worst-off approx one-fifth of Indians.

The BJP is working on its 'Sankalp Patra' (manifesto). Home Minister Rajnath Singh is leading the BJP's manifesto committee for 2019

Last month, the BJP had started crowd-sourcing suggestions to complete its manifest. The BJP has launched a website - bharatkemannkibaat.com, a toll-free number and flagged off 300 trucks to crowd-source ideas. Reports said these trucks would visit 4000 assembly constituencies with suggestion boxes to gather people's suggestions.