Know everything about Agni-V missile that India test-fired today 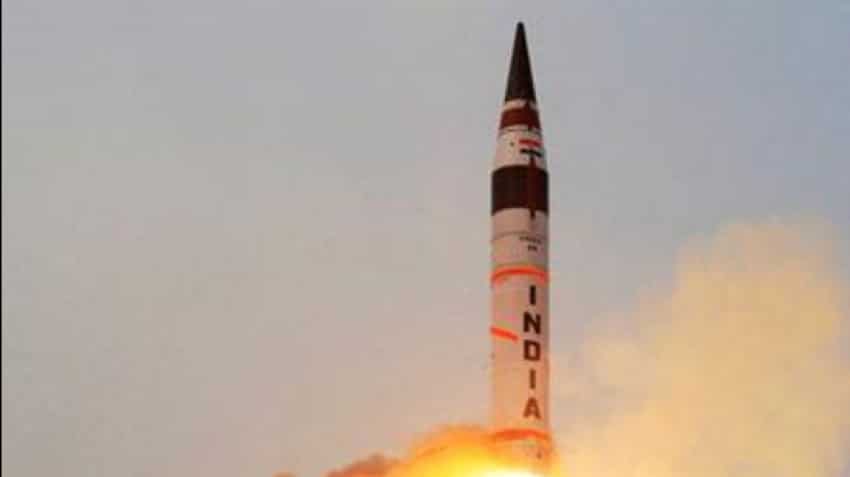 The missile is developed by the DRDO under the Integrated Guided Missile Development Program, it said. Image Source: PIB India/Wikipedia
Written By: ZeeBiz WebTeam
RELATED NEWS

The country's  Defence Research and Development Organisation (DRDO) launched the missile at 11:05 am (IST) from a mobile launcher complex-4 of the Integrated Test Range (ITR), IANS reported quoting defence sources as saying.

The missile is developed by the DRDO under the Integrated Guided Missile Development Program, it said.

Here are key things to know about Agni-V missile:

1. Agni-V is one of the most advanced missiles, which is capable of striking a target more than 5,000 km.

2. The missile is about 17 metres long, 2-metre wide and has launch weight of around 50 tonnes.

3. The missile can carry a nuclear warhead of more than one tonne.

4. Once the Agni-V is inducted in the Indian military, India will join the super exclusive club of countries with ICBMs alongside the US, Russia, China, France and Britain.

Meanwhile, the official Twitter handle of President Pranab Mukherjee congratulated the DRDO officials for successful launch of the Agni-V missile.

UIDAI ALERT! Aadhaar users can update Date of Birth (DoB) online on this portal - Here is how | EXPLAINED