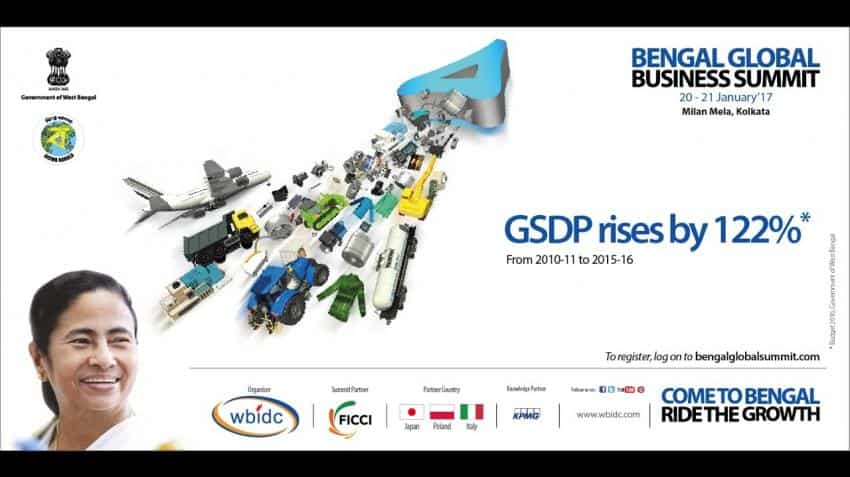 Chief Minister Mamata Banerjee said the states people will dedicate their hearts to Indian and foreign industrialists if they infused capital in the state. Image source: YouTube

Several corporate houses on Tuesday came forward with big investment proposals for West Bengal and right at the start of "Bengal Global Business Summit" here an estimated Rs 17,000 crore worth of investments were pledged by top business houses.

Reliance Industries Chairman Mukesh Ambani committed Rs 5,000 crore for the state over a few years in the digital ecosystem, retail and petro-retail segment and also said the group would explore with partners to set up an electronics manufacturing facility.

JSW Group`s chief Sajjan Jindal has pledged Rs 10,000 crore and the group, which inaugurated Rs 800-crore cement plant in West Midnapore district, has interests in setting up paint and speciality steel making units in the state.

RP-Sanjiv Goenka Group`s Chairman Sanjiv Goenka announced a Rs 1,000 crore investment plan for Bengal and Adventz Group also expressed its intent to invest a like amount in the state.

In an effort to move away from West Bengal`s "investor-wary" image and woo much-needed investments, Chief Minister Mamata Banerjee on Tuesday said its people would dedicate their hearts to Indian and foreign industrialists if they infused capital in the state.

Inaugurating the two-day business summit, she also assured industrialists that there was "no pressure, discrimination or intimidation" in the state and that Bengal had only "love and affection" for them.

"We love India and unity of India. We love tolerance. You must invest in Bengal. The state is attracting businesses from all over the world like never before. There is no pressure, discrimination, intimidation... only love, affection and attraction is here," she said.

She also assured her government would not spare even her party men if they created problems for investors and industrialists.

"We have to protect them (industrialists and investors) and they are our assets," she added.