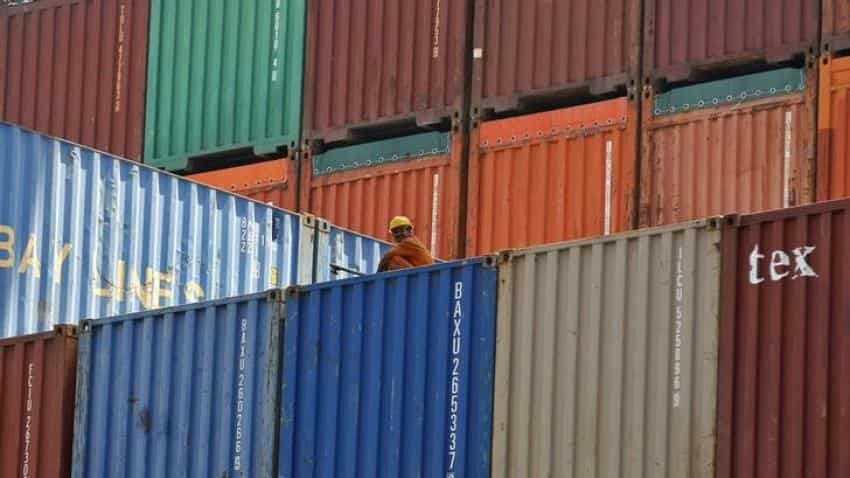 A worker sits on a ship carrying containers at Mundra Port in the western Indian state of Gujarat. Image Source: Reuters

India's merchandise exports have declined for the second consecutive month, whereby falling marginally by 0.30% for the August month.

The country's exports during the month fell $21.51 billion as against $ 21.58 billion in the same month last year, showed the Ministry of Commerce and Industry data on Thursday.

Exports had contracted for the 18-consecutive months till May this year, before rising marginally by 1.27% in June month.

The growth in exports have fallen for USA (minus 4.35%), EU ( minus 2.16%), China (minus 4.94%) but Japan exhibited positive growth (8.67%) for June 2016 over the corresponding period of previous year as per latest World Trade Organisation (WTO) statistics, cited the Ministry of Commerce and Industry in a press release on Thursday.

The country's imports have also recorded a negative growth during the August month. Imports during the period contracted by 14.09% to $29.19 billion as against $33.98 billion in the same period last fiscal.

The cumulative value of imports for the April to August period of FY17 stood at $143.18 billion as compared to $170.23 billion in the corresponding period of FY16.

Oil imports during August this year were valued at $6.74 billion, which was 8.47% lower than oil imports valued at $7.36 billion in the same month last year.

According to the release, the country's non-oil imports during the month were estimated to be lower at 15.65% to $22.44  billion as compared to $26.61 billion in the same period last year.

Trade deficit narrows to $7.7 billion despite nearly 7% decline in exports