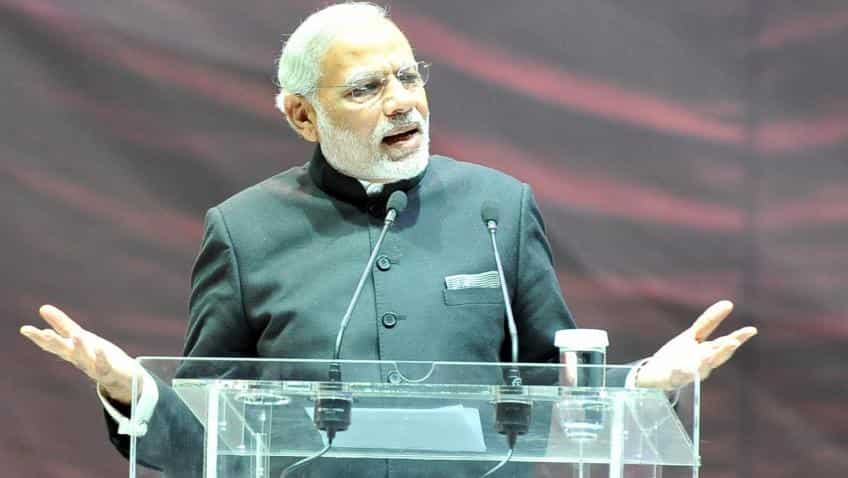 Modi hailed a sweeping liberalisation of rules on FDI, saying they would make Asia's third-largest economy the most open in the world. Photo: IANS
Written By: ZeeBiz WebTeam
RELATED NEWS

The decision to further liberalise FDI regime with the objective of "providing major impetus to employment and job creation in India" was taken at a meeting chaired by Prime Minister Narendra Modi.

Modi hailed a sweeping liberalisation of rules on foreign direct investment, saying they would make Asia's third-largest economy the most open in the world.

"Key reform decisions were taken at a high level meeting chaired by the PM, which makes India the most open economy in the world for FDI," PMO tweeted.

Key reform decisions were taken at a high level meeting chaired by the PM, which makes India the most open economy in the world for FDI.

Centre has radically liberalized the FDI regime, with the objective of providing major impetus to employment and job creation in India.

In a second tweet, PMO said the changes would provide a "major impetus to employment and job creation in India."

Welcoming the government's move, India Inc hailed Modi for his decision. Here's what they said:

Manufacturing and job generation will get a boost by the latest round of liberalisation in Foreign Direct Investment (FDI) norms that include doing away with dual clearances, Economic Affairs Secretary Shaktikanta Das said.

"With this (FDI) liberalisation, we expect manufacturing activity to come in...more activity in defence products. The driving force behind the whole thing is that all this investment should facilitate creation of jobs," he told reporters.

With the Centre approving 100 percent Foreign Direct Investment (FDI) in the defence sector in a bid to encourage 'Make in India' and boost the investment inflow into the country, Minister of State for Commerce and Industry Nirmala Sitharaman said the process has been eased out, but not at the cost national security.

Terming the simplification of policy framework governing investments in strategic sectors like defence and aviation as a "huge positive for the economy", Ficci Secretary General A Didar Singh said: "The Modi administration through these moves has once again highlighted that reform is a continuous process in order to capitalise on the potential India offers." Singh felt that "there is no doubt that India today is the most preferred investment destination in the world. While the attraction of our market is known to all, there is now even more reason for global investors to commit themselves for making and doing business in India".

"Taken together, the FDI rules announced today will attract big new investments across key sectors such as food processing, defence production, pharmaceuticals and civil aviation, among others, thereby adding to growth and employment."

Assocham Secretary General D S Rawat said the decision will help in bringing investment and advanced technology into the defence sector, potentially leading to inflow of capital and setting up of entities of original equipment manufacturers (OEMs) and their suppliers through technology transfer.

The Organisation of Pharmaceutical Producers of India (OPPI) said, "We welcome (the) government's decision to make changes to the FDI policy. We believe that this will provide an impetus to employment and job creation in the country," OPPI Director General Kanchana TK.