I didn’t announce a new tax-system as it was an interim budget: Piyush Goyal, Finance Minister

Budget 2019: Piyush Goyal, the Finance Minister of India, spoke about the budget and its sense with Zee Business’s Swati Khandelwal. Edited Excerpts: 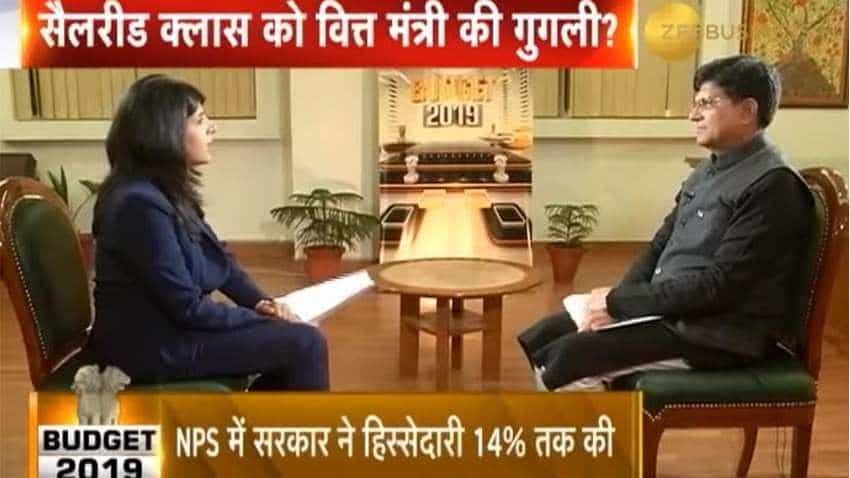 Budget 2019: We will stand for everyone especially for the MSME sector and home buyers. In fact, our government wants to give more power to the Reserve Bank of India, said Goyal.

Interim Budget 2019 has been presented and corporate India and other voices are saying that the budget is really talking about Sabka Saath, Sabka Vikas. They are certifying it as a balanced budget that talks about both the fiscal prudence as well as populism. On this occasion, the man of the moment, Piyush Goyal, the Finance Minister of India, spoke about the budget and its sense with Zee Business’s Swati Khandelwal. Edited Excerpts:

Q: You have announced a tax rebate for those who have been earning up to Rs5 lakh per year, but I would like to know the reason for leaving other salaried employees who are earning above that bracket, at least when we are also honest taxpayers of the nation?
A: Undoubtedly, we don’t have any doubt on it as all development works are fuelled by the tax that is paid by you all. The taxes being paid has helped us to provide toilets and cooking gases to the mothers and sisters of the country and deliver electricity to the children. Generally, everyone should be benefitted, and we wish to make it happen but for that purpose, you will have to wait for the main budget.

This was an interim budget and that’s why I was not able to announce several tax proposals or a new tax system. But, we have tried to support those with income up to Rs5 lakh, who are being relieved from the tax bracket, as they will be able to start paying their taxes through TDS deduction between April to July or else they would have forced to go for refunds. This is just not limited to Rs5 lakh, but it also includes several other things like an investment of up to Rs1.50 lakh, Mediclaim, education loan, interest on housing loans and other discounts like standard deduction that has been increased from Rs40,000 to Rs50,000. So, these deductions may help people with income of up to Rs8-9 lakhs to not pay the income tax.

I have a feeling that says that every section of the society has a right to enjoy the benefits but there is a class that has boarded the train, but rest have not been able to do so. And, I wish that those who have boarded the train should stretch their arms to support those who are left behind in boarding the train or the development. That’s why those with a high income should pay taxes and help others to taste the meaning of development, after all, development works are carried on the money that is collected through the tax that is collected from them.

Q: Now, I will talk about corporate India, who is saying that 99 per cent of the demands have been addressed but when it comes to corporate tax, the one per cent that contributes maximum revenue, has gone untouched.
A: Same logic applies over here too. I think you should think about it.

Q: It means that they will have to wait until the next budget is announced?
A: I feel that big public-sector companies and corporates with a huge market capitalisation that goes to lakhs of crores and corporate leaders with huge market capitalisation should contribute through taxes and support the economy of the nation. After all, the progressive nation pays back to them by increasing their expenditure. For instance, thousands of crores that were spent on cement and steel for the development of the toilets. In addition, it also helped in employing several and I think they, the employed ones, would have spent their wages on buying their requirements like clothes, shoes and other products. In fact, I have seen that the industry is benefitted whenever you think about developing villages of India and help money to reach to the masses. This tax is helping you, the corporates, to serve to the poor as well as the middle class.
In fact, Prime Minister Narendra Modi had an agenda of holistic development in the last five years and I think that the public will bless him for his efforts.

Q: The world has appreciated the forward-looking vision that was presented by you in the budget.
A: This is Prime Minister Narendra Modi’s vision and I will not like to any credit for it. He is a person with a clean heart and clear intention. He. PM Modi, has faced the challenges and understand the pain of poor or deprived and that’s why he wants to serve the needy.

Q: A package of Rs75,000 crores has been announced for the farmers. How will you meet the target?
A: Hope, you remember the loan waiver that stood around Rs70,000 crores that were announced in 2008 by the previous government led by Congress but they didn’t provide a single penny for the cause in the budget of 2008 or 2009 and left everything for the next government. When we came to power, we were handed over by an unpaid bill of subsidies of about Rs1 lakh 60 thousand crores and we were supposed to pay them. But, the government is a continuing entity and that is a reason that we have cleared them.
PM Modi is a person who looks after the money before taking a decision on the provisions. We have allocated Rs20,000 crore for the ongoing financial year and Rs75,000 crore for next year. This decision led to minor slippages in the fiscal deficit, which went up to 3.6% from 3.3%. We would have adjusted the slippage, but the Prime Minister asked us to show the actual slippage instead of telling a lie to the world. Rs75,000 crore has been allocated for FY2019-20, which is 0.3% of the GDP. We would have met the actual target of 3.1% if we would have not announced such initiatives.

Q: But it has increased due to the addition.
A: Yes, and I have said it and didn’t hide anything from anyone. I feel that we respect our farmers and they are the people who have helped us to be a food secured nation. I feel every citizen must respect them.

Q: The government had disinvestment target of Rs80,000 crore but has been able to reach to only Rs36,000 crore till date. How will you achieve the target in the next two months?
A: Have a look at previous years where you will find that 50-55% of the target is achieved in the last few months.

Q: You have fixed a target of Rs90,000 crores for the next fiscal year. How you will meet it?
A: The country is developing at a high speed, for instance, the stock market is going up, we have a market capitalisation of Rs13 lakh crores, CPSC's are growing at a fast pace and we also have stocks, which can be disinvested. Along with this, the banks, whose market cap has gone down, are recovering and three banks came out from the PCA restrictions bracket. I think the way they have been recapitalised and good governance practices that have been implemented in the banks will help other banks to recover. In fact, phone banking facility has been closed permanently. These steps will help in improving the disinvestment target and I can’t see any problem in it. In fact, the targets announced is something that was provided to us from the disinvestment ministry.

Q: There is an improvement in the banking sector, but liquidity concern is visible in case of NBFCs, however it doesn’t at the same level, but they do exist. They need regulation and I would like to know about government’s support to this sector?
A: I have said that our government will support the sector by taking decisions that are essential for the sector plus it is also ready to recapitalise them. We are ready to implement every recommendation that will be provided by the Reserve Bank of India.

Q: You want to say that the government will not back out?
A: We will stand for everyone especially for the MSME sector and home buyers. In fact, our government wants to give more power to the Reserve Bank of India. We want to strengthen the inflation targeting mechanism of the Reserve Bank. As I have mentioned that we are the first government, who has kept the inflation rates to its lowest in its five years of governance in 70 years. I don’t think that you would have heard about the skyrocketing prices of pulses or sugar in recent few years.

Q: What is your view on Long-term Capital Gains (LTCG)?
A: I think, Mr Arun Jaitley has explained it in the last budget and I feel that a small amount from your profit will help us in speeding the endeavours of developing the nation and serving the poor and medium-income group.