The trains would run from 6 am to 10 pm initially which would be rescheduled to 5:30 am to 11 pm depending on the traffic and demand. A mobile app named 'T Savari' for metro passengers was launched by Prime Minister Narendra Modi, who was also given a power-point presentation on the project at Miyapur station. 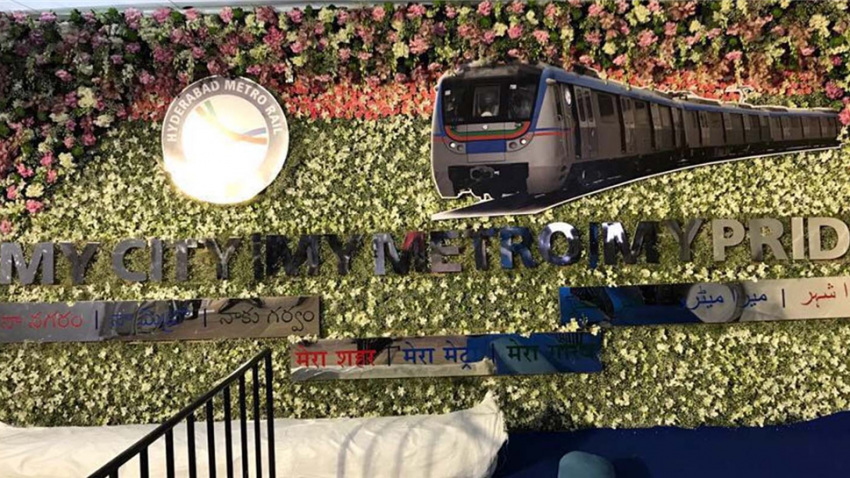 A view of the decorated Miyapur Metro station in Hyderabad. Image source: IANS

The Hyderabad Metro Rail opened for public today with the passengers describing their first-time travel by it as a "convenient, comfortable and awesome experience".

The metro rail commenced its operations between Miyapur and Nagole, having a total distance of 30 kms and 24 stations, the concessionaire, L&T Metro Rail (Hyderabad) Ltd, said in a statement.

After launching the 30-km stretch between Miyapur and Nagole, Modi took a ride on the train on its inaugural run.

The trains would run from 6 am to 10 pm initially which would be rescheduled to 5:30 am to 11 pm depending on the traffic and demand, Telangana's Information Technology Minister K T Rama Rao earlier said.

A mobile app named 'T Savari' for metro passengers was launched by Modi, who was also given a power-point presentation on the project at Miyapur station.

An elderly couple, who took the ride today, said they were very excited to travel in the metro for the first time and hoped that the cleanliness will be maintained at the stations with cooperation from public.

A woman software professional said, "It is amazing. It will help us in avoiding the traffic snarls and in saving travel time. It is very a convenient mode of transport and a comfortable ride."

A city-based businessman said it normally took him 45 minutes to travel between Miyapur and Ameerpet by other modes of transport, but now with metro he reached his destination in barely 20 minutes. "It's an awesome experience," he said.

The passengers also congratulated the Hyderabad Metro Rail Ltd (HMRL), and the Telangana and Central governments for providing them with them metro rail.

"Every project has its own share of challenges and Hyderabad Metro Rail Limited has had its fair share, but despite all those we have built a world-class, consumer- friendly metro service that will be a benchmark for other metro rails in the country," L&T Metro Rail (Hyderabad) Ltd's Managing Director and Chief Executive Officer Shivanand Nimbargi said.

"This is the biggest public private partnership (PPP) in the world and we are proud to be a part of such an initiative," he said.

The Hyderabad Metro Rail project is the first 'transit oriented development' (TOD) project that will exploit the real estate and earn revenue by leasing out commercial and office spaces inside and outside the metro stations across the city, an official statement said.

The rapid transit project has been planned with two components - stations along the elevated metro rail system and TOD branded 'Hyderabad Next'.

Depending on the city's appetite, 'Hyderabad Next' will be developed with various assets like office and retail spaces, hospitality, healthcare, and mixed use facilities, the statement said.

As many as 546 security personnel from private security service agencies will man the metro stations on the Miyapur-Nagole stretch, and they will be working under three uniformed police officials per station in each shift, it added.