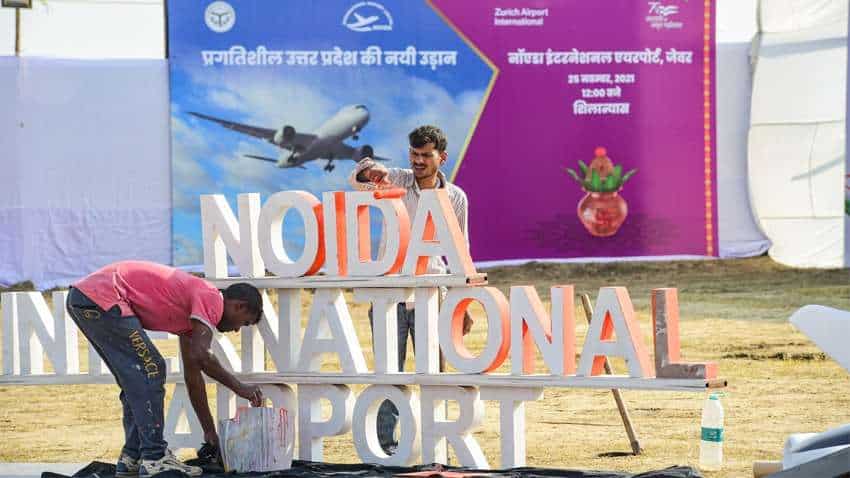 It will be the fourth largest international airport in the world and the project would create more than one lakh job opportunities, according to the Uttar Pradesh government. Pic: PTI

PM Narendra Modi on Thursday laid the foundation stone for the Noida International Airport at Jewar in Gautam Buddh Nagar district in the state of Uttar Pradesh. It will be one of the largest airports in Asia.

The airport, the second international aerodrome in Delhi-National Capital Region, is expected to be operational by September 2024 with an initial capacity to handle 1.2 crore passengers per annum. The airport, spread over 1,330 acres of land, will be developed by Zurich Airport International AG.

Manoj Gaur, CMD of Gaurs Group and Vice President NORTH CREDAI, said, "​Today is one of the biggest days for the Yamuna Expressway and NCR region. We are delighted that Hon'ble PM Modi and Hon'ble CM Yogi Adityanath have laid the foundation stone of Noida International Airport at Jewar. It is phenomenal news for the upliftment of the region. The region has already seen immense investment which would result in economic growth, not only of the YEIDA region but also of the entire state."

"The increasing business activity will also ensure employment opportunities that should result in increased demand for residential as well as commercial properties. I personally see a lot of future for real estate now. We have almost completed one township of 250 acres - Gaur Yamuna City - in the Yamuna Expressway," he added.

'Airport will act as a pivotal factor'

Ankita Sood, Head of Research, Housing.com, Makaan.com & PropTiger.com, said, “Jewar airport will act as a pivotal factor in the overall growth of Noida and Greater Noida regions in the coming times. The airport will provide the much-needed connectivity to these areas, which will bolster real estate sentiments across asset classes. We already see that residential demand in the micro-markets around the upcoming airport have gained momentum with September 2021, surpassing the 2020 levels, despite the setback of the COVID-19 second wave.”

Deepak Kapoor, Director, Gulshan Group, "Jewar Airport inauguration is a great news and will definitely going to be positioning Noida on a global map. It will bring lot of investment from multiple industries, new section of corporate class including HNIS, UHNIs will be evaluating the city for long-term income opportunities due to the seamless connectivity and high-end infrastructural developments like Film City, amid this real estate will emerge as definitely one of the brighter options. We are excited to see the fast paced development and support from government, and look forward to airport becoming fully operational."

Sanjay Sharma, Director, SKA Group, said, "Jewar Airport inauguration is going to be an important infra milestone for the region of Noida and Greater Noida. The nearby region will continue to attract the attention of investors and end-users, resulting in an increase in the number of new launches and sales activities in ongoing and upcoming projects. It will bode well for the pricing aspect also, as this region will become a hub of properties catering to different segments. Even RTMI units of developers in Noida will be an attractive proposition for people seeking home in proximity to the airport."

'Gamechanger for region of Noida'

Amit Modi, Director, ABA Corp & President elect CREDAI Western UP, "The inauguration of Jewar Airport is going to be a gamechanger for the region of Noida. It will be establishing the city on a global logistics map. The state government has always been very supportive and proactive in terms of development opportunities, ease of doing business etc. Now with this airport, the region will reap economic multiplier benefits, it will also open sources of employment in the construction business. It will also be giving a boost to the corporate travel and leisure opportunities, and bring Noida and Greater Noida at par with the millennium city of Gurugram."

'Look forward towards changing skyline of the city'

Yash Miglani, MD, Migsun Group, said, "Real estate will be one of the most crucial sectors that will be pivoting towards consistent growth, and we look forward towards changing skyline of the city with the airport and Film City becoming operational. The demand for residential and commercial real estate will be undergoing a sea of change as new class of corporate buyers and investors will be entering the market. An electronics and mobile accessories hub near region could become a reality in the Yamuna Expressway area, with several companies showing interest in the region for investment in the electronics sector also due to the upcoming international airport."

Nikhil Anand, Director, Maasters Infra, "The inauguration of an airport always has a rippling kind of effect to the nearby regions in terms of spike in business activities, employment opportunities etc. We expect the commercial real estate will offer attractive avenues of investment, with the growing infrastructure Noida will also establish a competitive advantage over other NCR regions.  This time is therefore ideal for making investments as the returns in long term will be substantial with Airport and Film City becoming operational. Developers are also going the extra mile with their novel offerings such as automated and controlled environment in commercial spaces."

Key things to know about the Noida International Airport:-

- The airport, the second international aerodrome in Delhi-National Capital Region, is expected to be operational by September 2024 with an initial capacity to handle 1.2 crore passengers per annum.

- The airport, spread over 1,330 acres of land, will be developed by Zurich Airport International AG.

- It will be the fourth largest international airport in the world and the project would create more than one lakh job opportunities, according to the Uttar Pradesh government.

- The first phase of the aerodrome is being done at a cost of more than Rs 10,050 crore, and the ground work regarding land acquisition and rehabilitation of the affected families has been completed, an official release said on Tuesday.

-The airport at Jewar will help decongest the Indira Gandhi International (IGI) airport in the national capital. It is strategically located and will serve the people of cities including Delhi, Noida, Ghaziabad, Aligarh, Agra, Faridabad and neighbouring areas, the release said.

-The airport will also be the country's "first net zero emissions airport".

-According to the Union government, the airport will be the logistics gateway of northern India, and with its scale and capacity, the aerodrome will be a "gamechanger" for Uttar Pradesh.

-For the first time, an airport has been conceptualised with an integrated multi-modal cargo hub, with a focus on reducing the total cost and time for logistics.

-Among other aspects, the airport will be linked to the planned Delhi-Varanasi high speed rail, enabling the journey between Delhi and airport in only 21 minutes, the release said.

-There will also be a state-of-art MRO (maintenance, repair and overhauling) service.

-The airport will introduce a swing aircraft stand concept, providing flexibility for airlines to operate an aircraft for both domestic and international flights from the same contact stand, without having to re-position the aircraft.