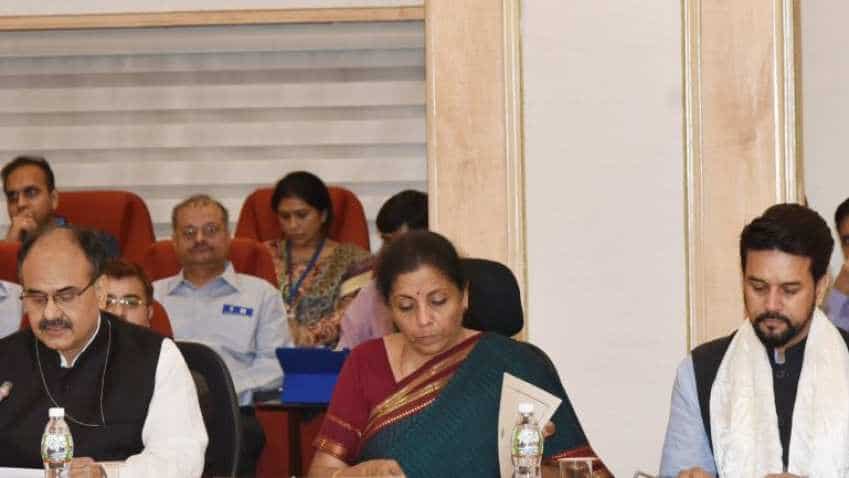 - GST Council today approved several changes which were made during last few months. For example, GST registration limit threshold limit was raised from Rs 20 Lakh to Rs 40 Lakh. Earlier it was done through notification,now appropriate changes have been made in the laws

- GST registration process: "One of the major changes that we've made is for the ease of GST registration. In the earlier system, people had to give various documents. Now we have decided to use Aadhaar. By using Aadhaar several advantages will occur to the business," said Revenue Secretary Ajay Bhushan Pandey. He added, "The person who is applying can go online, using his Aadhaar number through OTP authentication he can register himself on the GSTN portal & get GSTN registration number."

- FM Sitharaman on Telangana: "For the Telangana CM it is a very important day today because a long-awaited irrigation project of Kaleshwaram was on where Maharashtra and Andhra CM were also participating. These three states sent their representatives."

- Finance Minister Nirmala Sitharaman told reporters that Friday's GST Council meeting was the first after the new government has been formed. She said, "We had all states, represented by ministers, except Karnataka, Mizoram & Telangana. I had spoken to all the 3 Chief Ministers last evening."

- "They very clearly said because of their predetermined commitments...for instance in Mizoram budget session of the Assembly is going on, Karnataka - because of the drought situation the CM had to go to drought affected northern districts of the state," she added.

- GST council has decided to extends the tenure of the anti-profiteering body by two years, Zee Business TV reports. The Anti-profiteering authority will act against companies not extending GST rate cut benefits to customers.

- In her Opening Remarks at the 35th GST Council Meeting, the Finance Minister, N Sitharaman said that GST Council has done tremendous work since it's inception in post-Independence era of the country.

The Union Finance Minister,Smt. @nsitharaman chairing the 35th GST Council Meeting in New Delhi today being attended by the Finance Ministers of States/UTs & the Senior Officers of the Ministry of Finance & the State Govts among others.@nsitharamanoffc @PIB_India @MIB_India pic.twitter.com/a5ytfSj4G7

(This is a developing story. Key decisions will be out soon)

- Earlier, it was expected that the GST Council would consider slashing GST rate on electric vehicles to 5 per cent, from 12 per cent currently and extend the tenure of the anti-profiteering authority by a year till November 2020.

- It was also expected that the Council will consider a couple of anti-evasion steps such as integration of e-way bill with NHAI's FASTag from April 1, 2010, and asking businesses with a turnover of over Rs 50 crore to issue e-invoice for B2B (business-to-business) sales, as well as asking states to make e-ticketing mandatory for all movie halls.

- The Council was also expected to consider tweaking GST rate on lottery. Earlier, an 8-member group of state finance ministers had failed to reach a consensus on whether a uniform tax rate should be imposed on lotteries or the current differential tax rate system be continued. Currently, a state-organised lottery attracts 12 per cent GST, while a state-authorised lottery attracts 28 per cent tax.

- The Council was likely to discuss a mechanism for single-point sanctioning and processing GST refunds. The current mechanism entails twin refund sanctioning authority of the central and state tax officers but that could well change by August when the proposed new structure involving a single authority comes in place.