Narendra Modi swearing-in 2019 Guest List: PM-elect Narendra Modi will take oath as the Prime Minister once again on May 30 at the Rashtrapati Bhavan in New Delhi. 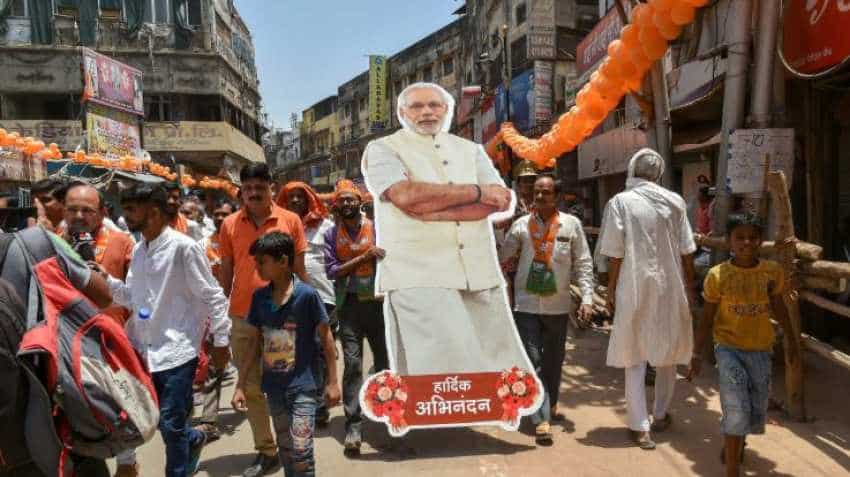 Varanasi: BJP supporters carry a cutout of Prime Minister Narendra Modi on his arrival, in Varanasi, Monday, May 27, 2019. (PTI Photo)

Narendra Modi swearing-in 2019 Guest List: PM-elect Narendra Modi will take oath as the Prime Minister once again on May 30 at the Rashtrapati Bhavan in New Delhi. The event is expected to have high-profile guests from all over India as well as abroad. A report by ANI today said BIMSTEC leaders will attend the oath-taking ceremony on May 30. In 2014, leaders of SAARC countries were invited for the ceremony. President of Sri Lanka will also attend. News agency PTI today reported that for a second time, Bangladesh Prime Minister Sheikh Hasina will miss her Indian counterpart Narendra Modi's swearing-in on May 30 as she will be on a three-nation foreign visit. According to a Bangladesh government release, Liberation War Affairs Minister AKM Mozammel Huq will attend the ceremony as the senior-most Cabinet member of the Bangladesh government. The Bangladesh Prime Minister was one of the first foreign leaders to congratulate Prime Minister Modi following his election victory.

BIMSTEC stands for 'Bay of Bengal Initiative for Multi-Sectoral Technical and Economic Cooperation'. The member countries include Bangladesh, India, Myanmar, Sri Lanka, Thailand, Nepal and Bhutan. All these countries are dependent on the Bay of Bengal.

The report quoted Ministry of External Affairs as saying that the President of the Kyrgyz Republic, who is the current Chair of the Shanghai Cooperation Organization, and the Prime Minister of Mauritius, who was the Chief Guest at this year's Pravasi Bhartiya Divas, have also been invited.

PTI reported today that top stars of Tamil cinema - Rajnikanth and Kamal Haasan - have been invited for swearing-in event.

Modi is the first BJP leader who has been elected for the second time after completion of his five-year tenure. Such feat has been achieved only by two Congress leaders - Jawaharlal Nehru and Indira Gandhi.