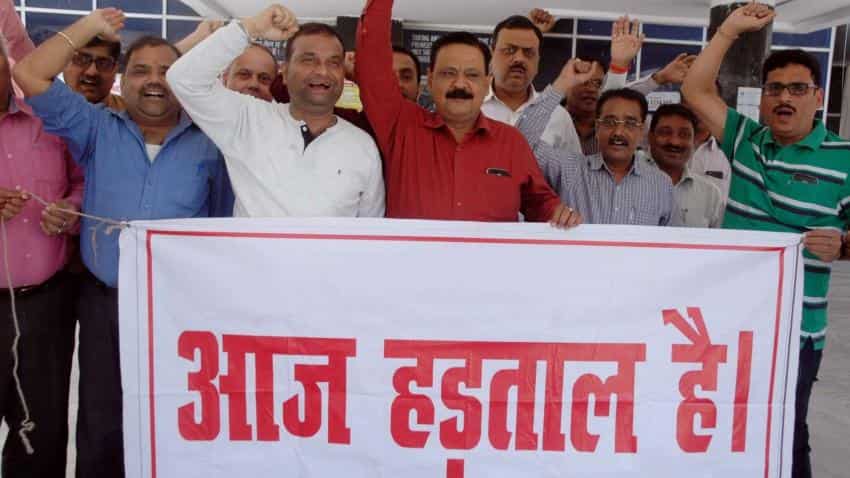 With 10 lakh public sector bankers  working in around 1,32,000 branches going to be on streets today, the banking operations are likely to take a hit.

Bank employee unions have called for a nation-wide strike today against the government's proposed consolidation reforms and other banking sector issues.

Employee unions under United Forum of Bank Unions (UFBU) has called for today's strike. It is an umbrella body of nine unions, including All India Bank Officers’ Confederation (AIBOC), All India Bank Employees Association (AIBEA) and National Organisation of Bank Workers (NOBW).

As the bankers going on strike, the banking operations will be affected throughout the country. Reportedly, cheque clearance, NEFT or RTGS transactions, deposits and withdrawals at PSU banks will be impacted. Though there will not be any impact on online transactions.

Most of the PSU banks which will be participating in today's strike, have already informed their customers about the delay in transactions. Moroever, the operations at private banks like ICICI Bank, HDFC Bank, Axis Bank will function normal but cheque clearance proceess will be delayed.

According to a report by IANS, the operations in Tamil Nadu has already affected as around 55,000 bankers have joined the strike.

CH Venkatachalam, General Secretary, AIBEA told IANS that around 12 lakh financial instruments valued around Rs 7,300 crore would not be cleared.

Normally in the three clearing grids functioning from South, West and North — Chennai, Mumbai and Delhi — on an average about 40 lac cheques and instruments worth about Rs 20,000 crore are transacted per day. This was affected in a big way, Venkatachalam said.

According to a PTI report, the unions are demanding: No write-off policy for non-performing assets (NPAs) of corporate loans, declaring wilful default of loans as criminal offence, implementation of the recommendations of parliamentary committee on recovery of NPAs and government should abolish the Banks Board Bureau and ensure stringent measures to recover bad loans.

Apart from these demands, the unions are upset with the government's decision to merge State Bank of India with its Associate banks. Bankers also raised the issue of privatisation.

10 lakh PSU bank employees to go on strike tomorrow; here's what they are demanding