Investors emotions shifted from enthusiasm to cautious note in the midst of Lok Sabha Elections 2019 results, despite their choice NDA government bagging a win. 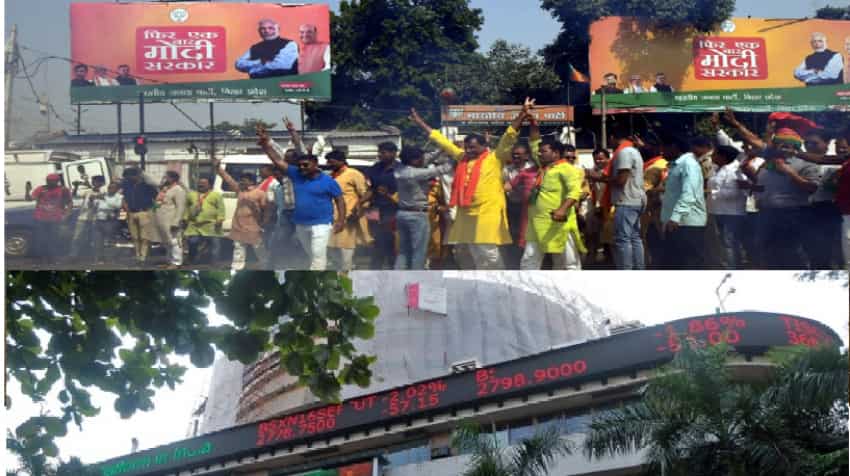 Lok Sabha Election Results impact on markets: Within a few hours, the matters in Sensex changed drastically. Investors emotions shifted from enthusiasm to cautious note in the midst of Lok Sabha Elections 2019 results, despite NDA government bagging a win. The D-day was divided into two parts, in the first half, there was no stopping in Sensex, as the index clocked for the first time over 40,124-levels. However, when the verdict was clear of which party will get charge for another 5 years in India, sentiments shifted so much that, investors made heavy profit booking. The outcome was Sensex from gaining over 900 points, have now ended losing a huge 1,473 points by touching an intraday low of 38,651.61. The surprising fact was that all this happened in just 1 day.

Other stocks that plunged were Tata Steel, ONGC, TCS, HDFC, Infosys, HUL, Reliance Industries, Axis Bank and M&M in the range of 0.20% to below 2%.

Sector-wise, it would be consumer durables which took most beating. The S&P BSE Consumer Durables finished at 24,154.37 down by 279.11 points or 1.14%. Losers here were Symphony, TTK Prestige, WhirlPool, Titan, VIP Industries, Voltas and Bajaj Electricals dropping between 0.24% to 3.55%.

Apart from the above two, even metal stocks were on the hit list. The S&P BSE Metal ended at 10,487.84 down by 167 points or 1.57%. Stocks like Vedanta, SAIL, Hindalco, National Aluminium, Hindustan Zinc, Jindal Steel and JSW Steel were losers.

Following domestic markets, the Indian rupee also surrendered its early gains during the second half of the trading session against US dollar benchmark index at interbank forex market.  The domestic currency finished at 36 paisa lower earmarking above 70.02 levels  against the dollar. In previous trading session, the rupee finished at 69.66-levels per dollar. Days before election voting verdict, were positive for rupee as the currency appreciated against dollar. However, by end of Thursday, tables turned.

As expected and predicted by exit polls the BJP is going to form the government again. Markets already had rallied on Monday and today after the trends started confirming BJP's win Sensex and Nifty hit their new highs. But now the market will have to catch up with ground realities of the economy and global factors. Global markets are showing weakness due to US-China trade worries and so our market may settle down or even turn negative in the short term.”