Poor visibility on account of unexpected rainfall in Mumbai has continued to impact airport operations at the international and domestic airport. 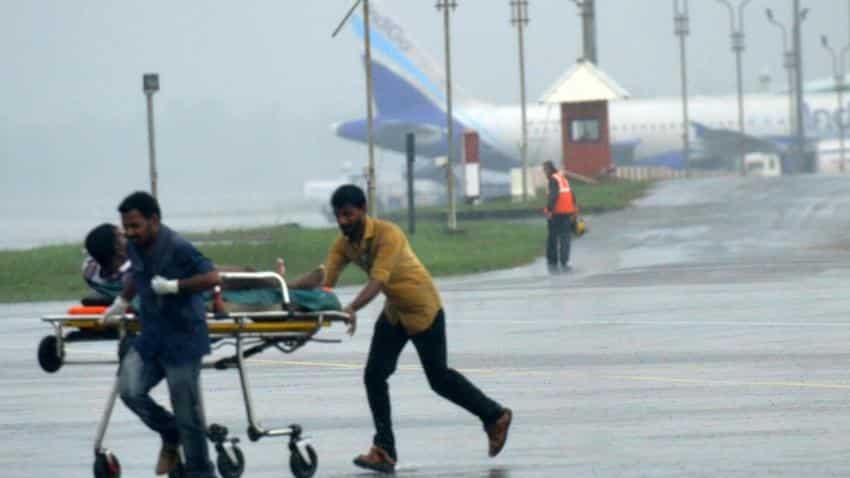 One of the 33 fishermen who were rescued by Indian Navy and Coast Guard from the deep sea in the wake of cyclonic storm Ockhi that hit the southern districts of Kerala and Tamil Nadu being taken for treatment. Image Source: IANS

A cyclone making its way up along the western coast of India has impacted flight operations in Mumbai.

Airlines have been running an hour late at Mumbai airport due to air traffic congestion.

#9Wupdate: Due to air traffic congestion in #Mumbai, arrival & departure delays up to 45 mins are expected at Mumbai airport till 1500 hrs.

Jet Airways and Spicejet have requested customers to check flight status before leaving for the airport.

Jet said the delays were expected to continue till 3pm today.

#WeatherForecast (05th Dec'17): Heavy rainfall is expected in Porbandar and Kandla due to Cyclone. We request all our passengers to check their updated flight status via https://t.co/iQhxtfDb6b before leaving for the airport.

We request all our passengers to check their updated flight status via https://t.co/iQhxtfDb6b before leaving for the airport. <2/2>

Poor visibility at the Mumbai airport also impacted flight operations of Singapore Airlines was forced to discontinue the approach to landing and do a "go-around", a report by PTI said.

The flight finally landed at the assigned runway nine minutes behind the scheduled time.

Flight operations were impacted on account of rains in Mumbai on Monday on the back of Cyclone Ockhi.

Cyclone Ockhi that originated in near the south-western coast of Sri Lanka last week. It travelled very near the southern-most tip of the Indian mainland, along the coasts of Tamil Nadu and Kerala.

Ockhi also hit Lakshadweep islands three days ago and where reports suggested that it was at its ‘most powerful’.

India Meteorological Department (IMD) has predicted thunderstorms and heavy winds in the Maharashtra and Gujarat region during the next 24 hours.

“Around December 6, it is likely to move north-westwards towards north Tamil Nadu and south Andhra Pradesh coasts,” Director of Area Cyclone Warning Centre, S Balachandran, said in a PTI report.

What you need to know about Cyclone Ockhi