The Indian National Congress (INC) party on Tuesday released its much awaited manifesto for the upcoming 2019 Lok Sabha elections and promised to create as many as 34 lakh jobs for youth. 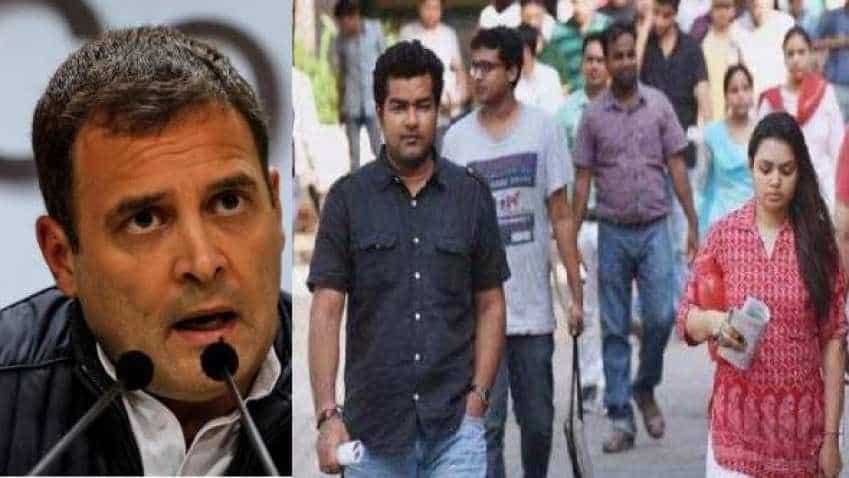 Congress also stated that it would change the definition of MSMEs on the basis of number of people employed. Reuters/PTI
Written By: ZeeBiz WebTeam
RELATED NEWS

Will minimum income scheme be a game changer in removing poverty?

The Indian National Congress (INC) party on Tuesday released its much awaited manifesto for the upcoming 2019 Lok Sabha elections and promised to create as many as 34 lakh jobs for youth in public sector. The document was released by the Congress President Rahul Gandhi and other senior party leaders. The manifesto is titled as 'Hum Nibhayenge' or 'We will deliver'. The document said that unemployment is the biggest challenge for the country and job creation should be the highest priority for the economy. It said that a new Ministry of Industry, Services and Employment will be created for the same.

The grand old party aims to achieve it by filling all 4 lakh vacancies by in the Central Government, Central Public Sector Enterprises, Judiciary and Parliament before the end of March 2020. It will also ask state governments to fill all vacancies, estimated at 20 lakh, in healthcare and education sectors and Panchayats and Municipalities. "We will work with State Governments to create new Seva Mitra positions (estimated at 10 lakh) in every Gram Panchayat and every Urban Local Body to ensure the effective delivery of government services to citizens," the manifesto added.

Congress has also proposed that application fees for government examinations and government posts will be abolished. It promises to create lakhs of new jobs for qualified teachers, doctors, nurses, paramedics, technicians, instructors and administrators through a massive expansion of the education and health sectors.

The party has also promised to increase funding for Anganwadi workers, ASHA workers, rozgarsahayaks, preraks, anudeshaks and other such groups. It will work with state governments to ensure that they are paid more than minimum wage and all arrears are paid immediately. "We will also work with State Governments and attempt to address all pending contentious issues regarding their salaries and work conditions. In addition, we will expand the ASHA programme and appoint a second ASHA worker in all villages with a population exceeding 2500 persons," it added.

Congress also stated that it would change the definition of MSMEs on the basis of number of people employed.

"We have delivered the voice of the people and nothing in the manifesto is a lie," Gandhi said after releasing the manifesto.

Will minimum income scheme be a game changer in removing poverty?