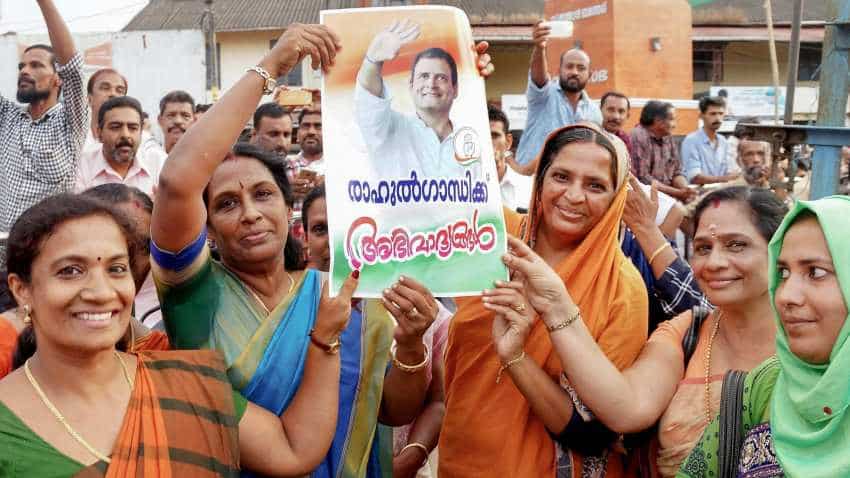 Congress Lok Sabha Elections 2019 Manifesto: The Congress party on Tuesday released its election manifesto for the upcoming General elections starting from April 11. Congress president Rahul Gandhi described the party's manifesto as the "voice of people" while senior party leader P Chidambaram said "wealth and welfare" were the central themes of the manifesto. Rahul Gandhi was joined by other top party leaders, including former prime minister Manmohan Singh and Sonia Gandhi, as the main opposition party unveiled its manifesto. Chidambaram said that the real issues in the country were of unemployment, farmer distress and women's safety while the BJP was trying to take the narrative to hyper-nationalism. Singh said the manifesto's purpose is to spell out the vision for the country to move towards the forward-looking and inclusive economy and polity.

Here are all the big promises in Congress manifest for Lok Sabha elections 2019:

Promise for Jobs: Congress manifesto promises to fill 4 lakh central government jobs in one year. "All of the 4 lakh vacancies as on 1st April 2019 in the Central Government, Central Public Sector Enterprises, Judiciary and Parliament will be filled before the end of March 2020. As a condition for devolution of funds to the healthcare and education sectors and to Panchayats and Municipalities, Congress will request State Governments to fill all vacancies, estimated at 20 lakh, in the 2 sectors and the local bodies."

- Application fees for government examinations and government posts will be abolished.

- The target population will be 5 crore families who constitute the poorest 20 per cent of all families. They will be the beneficiaries of MISP or NYAY;

- Each family will be guaranteed a cash transfer of Rs. 72,000 a year;
- As far as possible, the money will be transferred to the account of a woman of the family who has a bank account, or who will be urged to open a bank account;
- There will a Design Phase (3 months), followed by Pilot and Testing Phases (6-9 months) before the rollout;
- The rollout will be implemented in phases;
- The estimated cost will be <1 per cent of GDP in Year 1 and <2 per cent of GDP in Year 2 and thereafter; As the nominal GDP grows and families move out of poverty, the cost will decline as a proportion of GDP.

MGNREGA jobs: Congress promises to guarantee jobs for 150 days, instead of the current 100 days.

Big spend on education: At the release of the manifest, Congress chief Rahul Gandhi said if his party is elected to power, its government would spend six per cent of the GDP on education.

Rafale probe: Congress manifesto committee member Bhalchandra Mungekar told ANI, "We will initiate an inquiry into Rafale deal on the first day after coming to power and we have included this in the manifesto."