Budget 2019 poses some challenges to Modi 2.0 Government among which are the government's future economic agenda, water security, fuelling weak demand and liquidity in the banking system. 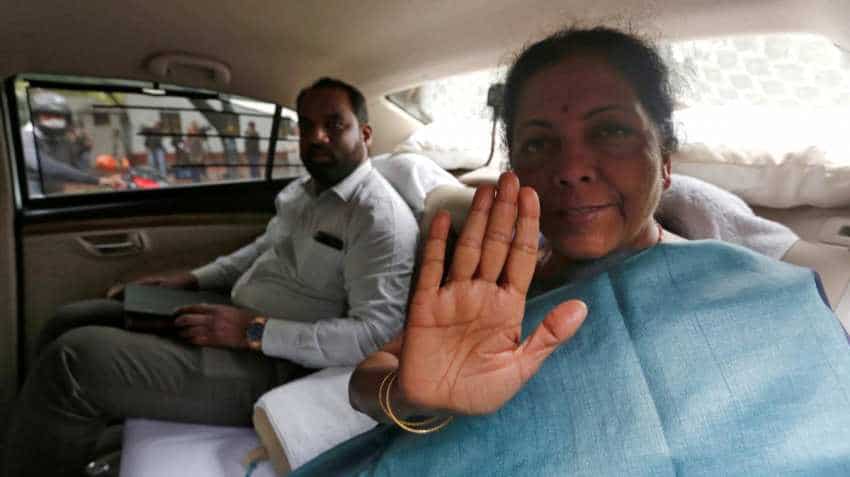 Modi 2.0 government will find it challenging to retain its fiscal deficit target of 3.4% set out in the Interim Budget amid dwindling revenue and competing priorities for spending. Photo: Reuters
Written By: Asit Manohar
Edited By: Harish Dugh
RELATED NEWS

Budget 2019 is just 24 hours behind and the core committees made by the Finance Minister Nirmala Sitharaman and the Modi 2.0 Government have already submitted their recommendations. However, if going by Finance Ministry sources, there are some challenges that the Modi 2.0 government wants to deal with in this budget. These challenges are the government's future economic agenda, water security, weak demand and liquidity in the banking system.

Speaking on the challenges before budget 2019 Garima Kapoor, Analyst at Elara Securities said, "We believe the government will find it increasingly challenging to retain its fiscal deficit target of 3.4% set out in the Interim Budget for FY20 amid dwindling revenue and competing priorities for government spending. Although revenue growth visibility and expenditure compulsion suggest slippages could exceed 50bp, we believe the government will look to limit it to 20bp by budgeting for 5G auction revenue and optimistic revenue projections. As such, we expect it to report a fiscal deficit target of 3.6% on 5 July 2019E."

Asked about the challenges before the Modi 2.0 Government in the budget 2019, Kapoor said that such challenges are the government's future economic agenda, water security, fuelling weak demand and liquidity in the banking system.

The Budget will be watched keenly for the future development agenda of the government in terms of welfare and growth policies. The main thrust of Modi 2.0 Budget is expected to be agriculture, MSME and the water sector. Among key schemes, we expect the government to announce collateral-free loans of up to INR 5mn for entrepreneurs, a scheme for providing short-term agriculture loan of up to 0.1mn at 0% interest rate for a tenure of 1-5 years, sugar subsidy for below poverty line (BPL) families, pension scheme for small & marginal farmers and a revamped scheme for piped water supply to rural households apart from announcement of expansion of Pradhan Mantri Kisan Samman Nidhi Yojana to all farmers. We also expect the government to lay the roadmap for its INR 100tn infra spending.

After successfully delivering on the pledge to provide toilets under Swachh Bharat initiative, the NDA government in its second term has pledged to provide clean piped drinking water to every rural household through its Nal se Jal scheme. The government has formed a new Ministry called Jal Shakti, which is working as a nodal ministry for water management. During Prime Minister Narendra Modi’s first address in the Lower House after his re-election, he stated the need for sustained focus on water conservation. Even during his first address to the nation via Mann ki Baat, PM Modi said only 8% of rainwater in India is conserved even as statistics by Niti Aayog suggest at least 21 cities in India are predicted to run out of groundwater by 2020.

Jatan Gogri, Analyst at Elara Securities said, "Our analysis of groundwater suggests depleting levels would be a serious impediment in providing piped drinking water to households. As per the Central Groundwater Board’s assessment report, Groundwater Yearbook 2017-18, at 251bn cubic meters per year India consumes 124% more groundwater than China. This overexploitation of groundwater has rendered more than 50% of groundwater table in the States of Tamil Nadu, Haryana, Punjab, Delhi and Rajasthan unsafe, suggesting overexploitation and/or high salinity levels."

The high-frequency heat map highlights demand indicators remain weak, as highlighted by muted auto sales, moderating non-oil & non-gold imports, rail freight & passenger growth among others. Demand weakness is further accentuated by the slow progress of Monsoon, which, in turn, is affecting Kharif sowing. Cumulative rainfall as on 26 June has been 36% below its long period average (LPA). The LPA for India at 89cm is computed as average Monsoon received over the past 50 years.

As per latest data, 14.66mn hectares of crops have been sown to date vs normal sowing of 19.67mn hectares and 16.21mn hectares of 2018, indicating contraction of ~26% and 10%, respectively. A larger divergence of Monsoon in the central region (comprising Madhya Pradesh, Uttar Pradesh, Chhattisgarh and Uttarakhand) has significantly curtailed sowing of pulses, coarse cereals and oilseeds. Sowing of pulses is lower by 69.7% and oilseeds by 44.5% vs normal sowing area. This, in particular, has led to an increase in the price of pulses. The wholesale price of Tur, Urad and Moong have increased by an average of 3.69% in June vs a contraction of 4.15% during the same period in 2018.

The spatial and intertemporal distribution of Monsoon and the pace of income transfer under the PM-Kisan scheme would be critical in reviving rural consumption demand.

Systemic liquidity in the banking system

The systemic liquidity in the banking system turned firmly in surplus mode with the resumption of government expenditure post elections, reduced cash leakage in the system and RBI’s continued infusion of reserve money through open market operations (OMO). The RBI conducted OMO worth INR 275bn in June 2019 vs INR 250bn in May 2019. The currency in circulation increased by INR 87bn in June 2019 vs an average of INR 288bn during April-May 2019. As such, systemic liquidity in the banking system moved to a surplus of average INR 650bn in June 2019 compared to INR 125bn in May 2019 and –INR 433bn in March 2019.

Let's see how Narendra Modi and Nirmala Sitharaman addresses these challenges in the Union Budget 2019 tomorrow.