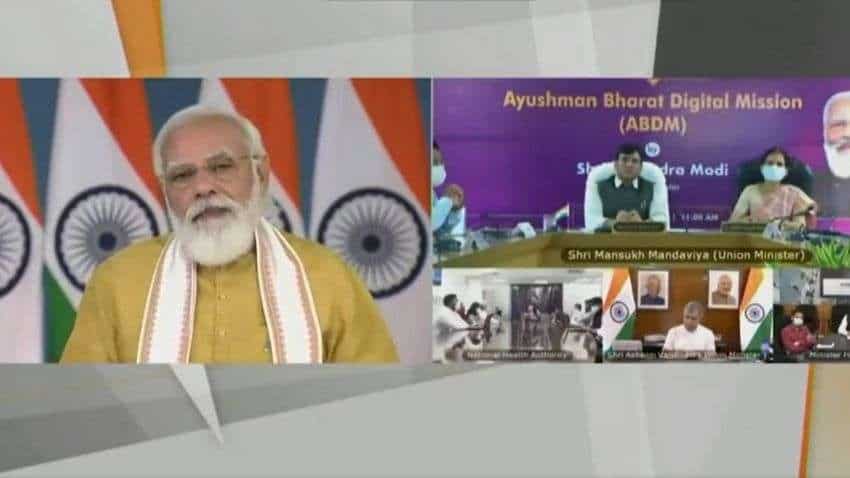 Prime Minister Narendra Modi launched the Ayushman Bharat Digital Mission today via video conferencing at 11 AM. The pilot project of Ayushman Bharat Digital Mission had been announced by the Prime Minister from the ramparts of Red Fort on August 15 last year. Currently, the programme is being implemented in the pilot phase in six union territories.

PM Modi has tweeted from his official Twitter handle the video of his speech at the launch. The tweet said, "Speaking at the launch of Ayushman Bharat Digital Mission."

Speaking at the launch of Ayushman Bharat Digital Mission. https://t.co/OjfHVbQdT7

The PM said at the launch, "In the last seven years, the campaign to strengthen the health facilities of the country is entering a new phase from today. A mission is starting today, which has the power to revolutionize healthcare in India."

He further added , "130 crore Aadhaar numbers, 118 crore mobile subscribers, about 80 crore internet users, about 43 crore Jan Dhan bank accounts, there is no such big connected infrastructure anywhere in the world. This digital infrastructure is taking the ration from the administration to the common Indian in a fast, transparent manner."

At the launch, PM Modi said that the Arogya Setu app helped a lot in preventing the spread of corona infection. He added, "Vaccine to everyone, under the free vaccine campaign, India has been able to apply about 90 crore vaccine doses today, so Co-WIN has a big role in it."

The Prime Minister stressed on the fact that Ayushman Bharat- PM JAY has removed the great concern of the life of the poor and said, "So far, more than 2 crore countrymen have availed the facility of free treatment under this scheme. In this also half the beneficiaries are our mothers, sisters, daughters."

PM said, "Now work is going on in India on such a health model, which is holistic, inclusive. A model that emphasizes prevention of diseases - That is, preventive healthcare, treatment in case of illness should be accessible, cheap and accessible to all."

PM Modi also commented, "Unprecedented reforms are also taking place in medical education to transform India's health sector. Today more doctors and paramedical manpower are being prepared in the country than before in 7-8 years."