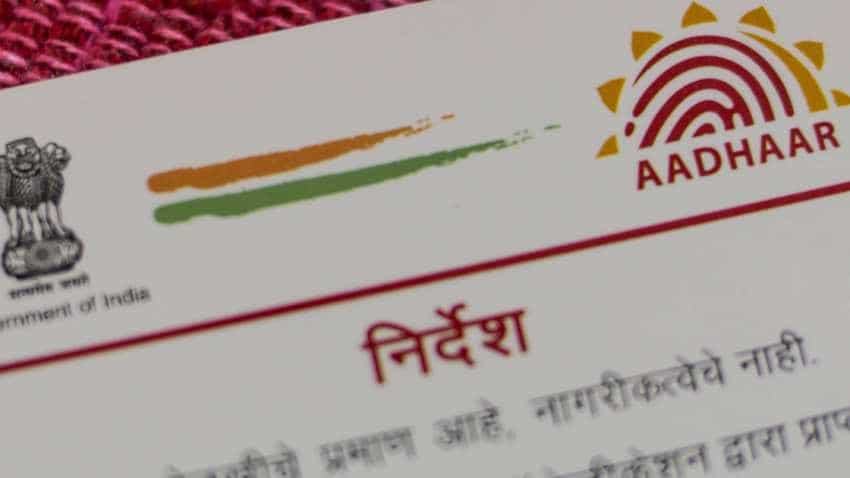 Apart from availing government benefit schemes, Aadhaar is mandatory to be linked with PAN as well as for filing income tax returns. Image Source: PTI
Written By: PTI
RELATED NEWS

"We are actually taking up the matter with UIDAI for excluding the APY like the others (government schemes) from the SC order on Aadhaar because we feel that in a scheme like APY there is government guarantee," Contractor told PTI here on the sidelines of an event on APY.

All those schemes of government benefits are exempted from the order on Aadhaar by the Supreme Court, the PFRDA chairman added.

The Supreme Court in its verdict on Aadhaar on September 26 pronounced constitutional validity of the unique identification number and said it would not be mandatory for services such as banking and telephony but will be required to avail the government-run social benefit schemes.

"For APY, as this scheme comes with a government guarantee on pension, it would fall within the scope of that definition (of government benefits). And therefore there is a strong case for excluding APY (from SC order).

"We are taking it up with the Unique Identification Authority of India (UIDAI) and if they agree to that, we will not be affected by this (order)," he said further.

Apart from availing government benefit schemes, Aadhaar is mandatory to be linked with PAN as well as for filing income tax returns.

When asked if there were any hiccups in adding APY subscribers after the apex court order, the Chairman of the Pension Fund Regulatory and Development Authority (PFRDA) said that as such there are no concerns on adding new subscribers under the Atal Pension Yojana as other methods are being employed for KYC details.

Before the SC order on Aadhaar, the unique identification number was made mandatory for a host of services and became a one-point solution to complete the know your customer (KYC) requirement at an affordable cost.

Contractor said that PFRDA has added almost 28 lakh new APY accounts during the first eight months of the current fiscal.

Also Watch: Why shares of fiscal firms need to be demat

The Pension Fund Regulatory and Development Authority added 50 lakh subscribers under the APY in the last fiscal and hopes to close with about 1.50 crore subscribers by the end of March 2019.

Stocks in Focus on April 3: Auto Stocks, Aurobindo Pharma to RBL Bank; here are expected 5 Newsmakers of the Day