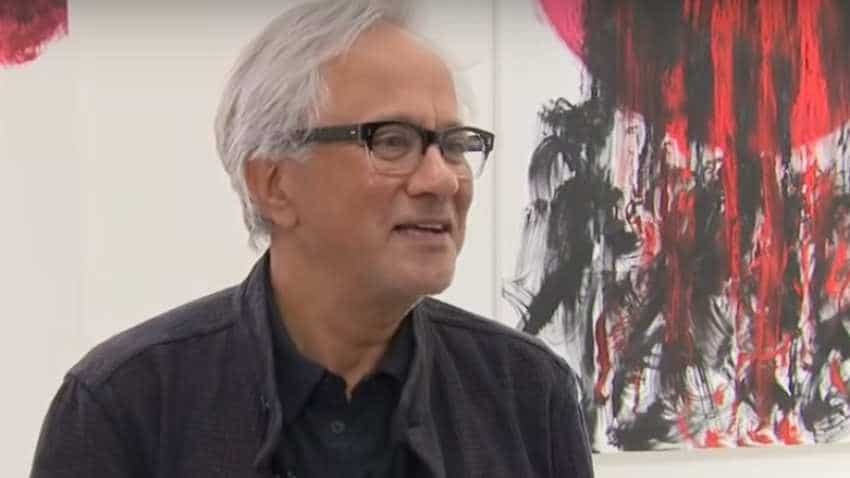 Anish Kapur is an Indian-born British sculptor known for his use of abstract biomorphic forms. Image source: Youtube/video grab

Sculptor Anish Kapur has topped 'Hurun India Art List 2019' released on Wednesday. The list is a ranking of top 50 Indian artists alive on the basis of their works at public auctions from April 2018 to March 2019. Kapur is followed by Akbar Padamsee and Krishen Khanna. Works of Anish Kapur, 65, were auctioned for Rs 168.25 crore in the said period considered for preparing the list. Padamsee's and Khanna's works were auctioned for Rs 45.84 crore and Rs 9.48 crore respectively. Anas Rahman Junaid, Managing Director and Chief Researcher of Hurun Report India, said “Resale value of some of the works of the top artists delivers better returns than traditional asset classes. Hurun India Art List is targeted at those who have the ability to collect but don’t know where to start."

An Encyclopedia Britannica entry about Anish Kapur says he is an "Indian-born British sculptor known for his use of abstract biomorphic forms and his penchant for rich colours and polished surfaces. He was also the first living artist to be given a solo show at the Royal Academy of Arts in London." 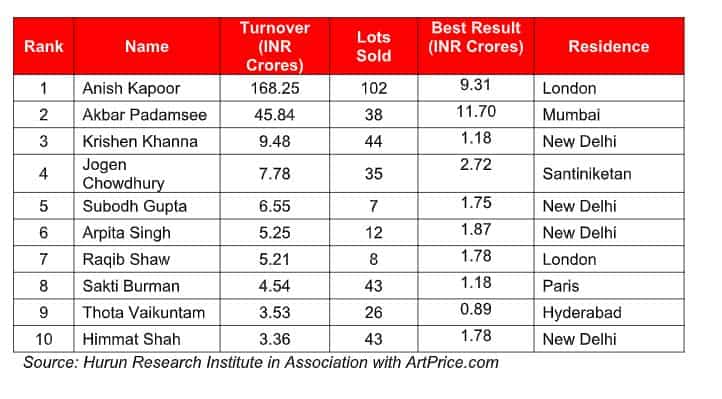 Among the women artists, modernist painter Arpita Singh is the most successful. Her works were cumulatively sold at Rs 5.25 crore. The eldest woman in the list is Arpita Singh (84) and Zarina Hashmi (84). In the list of 50, the oldest and the youngest are Krishen Khanna (94) and Sumir Tagra (40). There are 16 Delhi residents in the list, followed by seven from Mumbai and four from Bengaluru. In terms of places of origin, West Bengal tops with eight artists in the list, followed by seven of Maharashtra and six from Kerala.
This is the first India Art list released by Hurun India.

- The works of Anish Kapoor, contemporary sculptor, registered the highest demand in terms of value and lots in the auction houses during the period under review. 102 lots of Anish Kapoor were sold during 2018-19.

- Modernist painter Arpita Singh is the most successful female artist with whose works were cumulatively sold for INR 5.25 Crore.

- 32 individuals on the list use the contemporary art form to express ideas and is the most popular style in Hurun India Art List 2019. Abstract, surrealism, and modernism also have a growing influence from an Indian art context.

- The most popular mode of presenting art is painting, followed by sculpting. Many artists prefer more than one mode of expression.

- With 16 residents from Hurun India Art List 2019, New Delhi is the art capital of India, followed by Mumbai (7) and Bengaluru (4)

- In terms of places of origin, most of the artists in Hurun India Art List 2019 were born in West Bengal (8), followed by Maharashtra and Kerala with 7 and 6 respectively.