German Chancellor Angela Merkel in a joint press meet with Indian prime minister Narendra Modi on Tuesday said that the country wants to strengthen its ties with India and this should not be at the cost of its trans-Atlantic relationship. 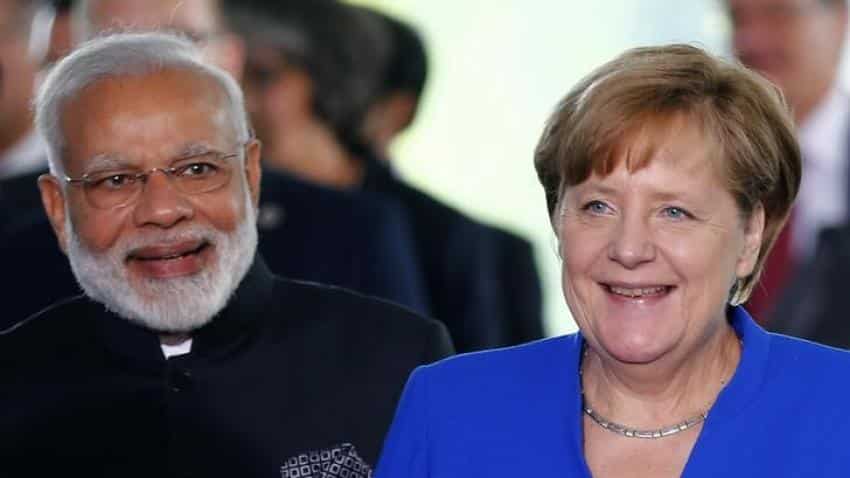 German Chancellor Merkel and Indian Prime Minister Modi walk before a signing ceremony at the 4th round of German-Indian government consultation at the Chancellery in Berlin Image Source: Reuters
Written By: Reuters
RELATED NEWS

Germany wants to develop its ties with India and this should not be at the cost of its trans-Atlantic relationship, Chancellor Angela Merkel said on Tuesday after meeting India`s prime minister, who called Berlin "a very reliable partner".

Merkel, seeking to repair damage after shocking Washington on Sunday by declaring the era in which Europe could rely on its partners was somewhat over, repeatedly stressed the importance of trans-Atlantic ties but also highlighted Germany`s history of co-operating with India and China in a "global world".

On Monday, Merkel had underlined her doubts about the reliability of the United States (US) as an ally.

US President Donald Trump responded by tweeting on Tuesday, "We have a MASSIVE trade deficit with Germany, plus they pay FAR LESS than they should on NATO & military. Very bad for US This will change."

We have a MASSIVE trade deficit with Germany, plus they pay FAR LESS than they should on NATO & military. Very bad for U.S. This will change

"That`s of huge importance and in no way directed against any other relationships and certainly not against the trans-Atlantic ties, which have historically been very important for us and will remain so in future," she said.

Speaking at a joint news conference with Modi, she reiterated her view that "we need to take our fate in Europe into our own hands".

Europe needs to step up its presence on the international stage, for example by bringing about solutions to issues such as the Libya conflict, migration and economic problems including unemployment, she said.

Her comments came after Trump last week criticised major NATO allies over their military spending and ruffled feathers by refusing to endorse a global climate change accord.

Merkel praised India for implementing that climate pact very "intensively and in a very committed way" and Modi said people had no right to ruin the environment for future generations.

In a sign of Berlin`s shifting focus towards Asia, Merkel is also due to meet Chinese Premier Li Keqiang on Wednesday.