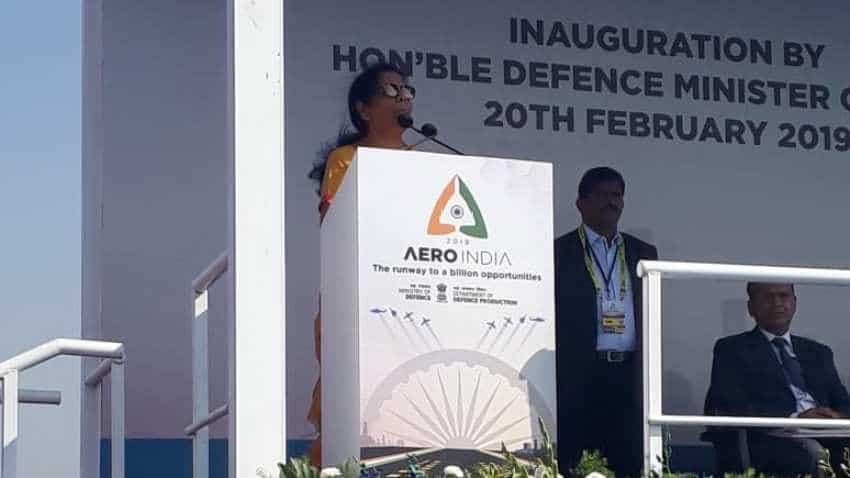 The biennial event, which would showcase India's air defence prowess, would also act as a platform for aviation companies, the defence sector and government to forge new alliances and contracts. Aero India 2019 Twitter handle

Defence minister Nirmala Sitharaman Wednesday invited investors to capitalise on the ecosystem in aero space and other sectors in India which offered a big market for Defence manufacturing. In her inaugural remarks at the Aero India 2019, the 12th edition of Asia's premier air show at the Yelahanka air base here, Sitharaman made a strong pitch for 'Make in India" and referred to a slew of initiatives taken by the government, including permitting 100 per cent Foreign Direct Investment (FDI) in Defence manufacturing.

Explaining the possibilities in the aero space and defence sectors, she said the Original Equipment Manufacturers (OEM)s could find joint venture partners so that the production could be scaled up and they could have a captive market and could export from India.

She also noted that during the last four years and the current financial year, 150 contracts worth about Rs 1,27,500 crores have been signed with the Indian vendors for procurement of defence equipment for the armed forces.

The biennial event, which would showcase India's air defence prowess, would also act as a platform for aviation companies, the defence sector and government to forge new alliances and contracts.

The current edition of Aero India was marked by controversy with reports about it being shifted to Uttar Pradesh, which had taken a political colour, as the Congress-JD(S)led government in the state had hit out at the BJP led Centre against the alleged move.

Also, aerobatic teams like India's Sarang (ALH-Dhruv) and UK-based Yakovlevs are expected to enthrall the audience.

The Aero India official website said a total of 61 aircraft would be on display and 403 exhibitors would be part of the show. CEO's round table, drone Olympics, startup manthan and women's day (to celebrate women achievers) are some of the highlights of Aero India-2019.