4 years of Modi government: From jobs, taxation to financial inclusion, check out impact

Four years of Modi government: Even oil prices had turned benign suddenly after having at one point threatened to breach $150 mark. PM Modi led government will complete 4 years in office on 26, May. Take a look at how exactly the Modi sarkar handled the situation across these parameters, 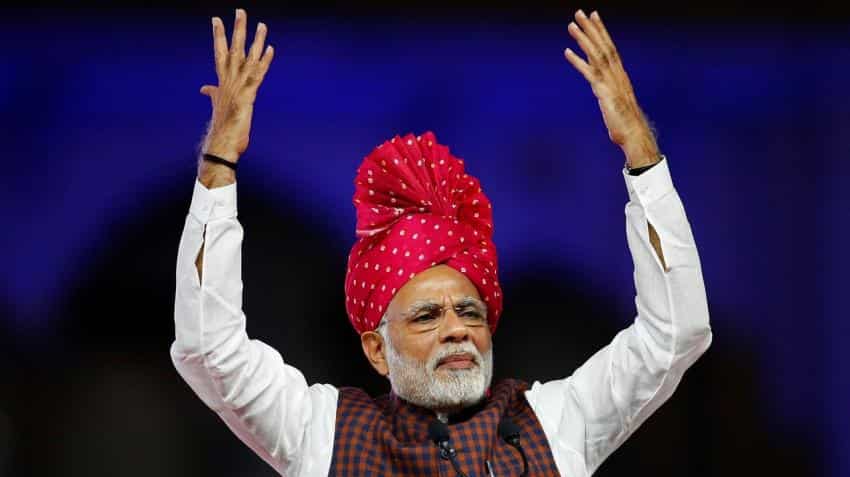 The reforms carried out by the govt will bear fruit only in the medium to longer term. Image source: Reuters
Written By: ZeeBiz WebTeam
RELATED NEWS

Four years of Modi government: When Prime Minister Narendra Modi rose to power in 2014, thanks to a sharp fall in crude oil prices and favourable monsoon, he enjoyed a stable economic environment with rupee, current account deficit and inflation mostly under control. Even oil prices had turned benign suddenly after having at one point threatened to breach $150 mark. PM Modi led government will complete 4 years in office on 26, May. Take a look at how exactly the Modi sarkar handled the situation across these parameters, the result thereof and what emergencies it faces in its 5th and final year.

“In the past four years, there has been visible improvement in most macro indicators. India’s gross domestic product (GDP) grew at an average 7.3 per cent these four years, the fastest in BRICS, though slower than 7.6 per cent in the preceding decade," said Crisil's chief economist Dharmakirti Joshi.  Rating agency Crisil, in its report, ‘4 years through 6 lenses’, released on Thursday, analysed the Modi government’s performance in the past four years using six lenses, which reflect the true structural health of the economy.

1. Employment or Jobs Creation: Challenges persist here, mainly because construction and manufacturing, which generate the most employment among non-agriculture sectors, have underperformed.

2. Manufacturing: The share of manufacturing in GDP increased only 80 bps between fiscals 2015 and 2018 to 18 per cent, making the ‘Make in India’ target of 25 per cent by fiscal 2022 appear gargantuan as it would entail clocking a whopping 17.5 per cent annual manufacturing growth from here.

3. Taxation: Direct tax compliance has shown clear improvement in the past two years, following the income declaration scheme and demonetisation, and GST is seen speeding up both formalisation and tax compliance.

4. Rural economy: Rural economy is beset with challenges such as slower agricultural growth, poor farm price realisation, slowdown in construction activity, and sluggish rural wage growth despite a raft of well-meaning measures in the past four years.

5. Investments: A decisive push to the investment cycle eluded despite all the facilitation. Private sector investments, which is critical, remained sluggish and unlikely to revive in a hurry.

Meanwhile, Crisil reaffirmed its FY19 GDP growth estimate of 7.5 per cent and added that pushing it up to 8 per cent will require a jump in private sector investments and reforms implementation.

The reforms carried out by the government are a work in progress and will bear fruit only in the medium to longer term, the report said.

Crisil concludes by saying PM Modi-led National Democratic Alliance government’s efforts to ensure a well-oiled economy will be tested in its fifth year in office as multiple risks materialise, led by exogenous factors such as a runaway rise in global crude oil prices.