Jaitley said today's verdict held that nobody was guilty in the case and investigation agencies would take an appropriate decision, taking facts and history into account. 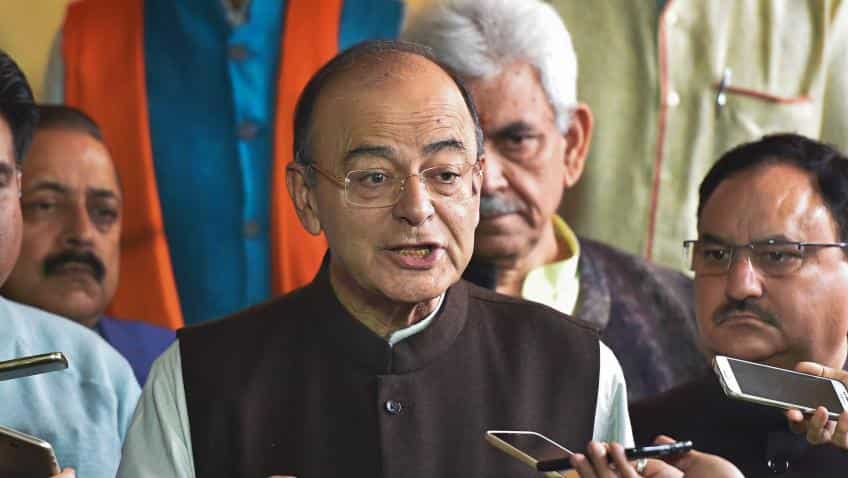 Citing a Supreme Court verdict to assert corruption in the UPA government's 2G spectrum allocation policy, Finance Minister Arun Jaitley on Thursday mocked the Congress by saying it was treating a trial court's acquittal of the accused in the case as a badge of honour.

Jaitley said today's verdict held that nobody was guilty in the case and investigation agencies would take an appropriate decision, taking facts and history into account.

The Enforcement Directorate has already said it will appeal against the judgement while a CBI spokesperson said it would study the verdict and take a decision over it soon.

"Its history is of corruption. Facts have proven it. Congress leaders are treating the judgement like a badge of honour and certification that the 2G spectrum allocation policy was an honest policy," Jaitley told reporters in the Parliament house complex, while reacting to political aspects of the case.

The Finance Minister cited the details of the allocation policy of the UPA government and the Supreme Court verdict in February 2012 quashing all allocations. Each allocation was quashed as arbitrary and unfair, he said.

Jaitley also rejected former telecom minister Kapil Sibal's "zero loss" claim in the allocation, saying it was disproved by the subsequent allocation by the BJP-led NDA government, fetching Rs 1.10 lakh crore in 2015 and Rs 66,000 crore in 2016. Sibal fired a fresh salvo at the BJP following the trial court order today.

The UPA government had fixed a price of Rs 1,734 crore per licensee, he said, and attacked the Manmohan Singh government for giving licences in 2007-08 on the basis of a price linked to 2001 and there was a "huge element of arbitrariness" in the implementation of the policy.

Talking to reporters after a special court acquitted all the accused in the 2G scam case acquitted, Sibal said, "There was no case from the beginning. In fact, it was scam of lies, there was no scam on our part. We did it in accordance with policy prescription that we had at that point in time."

Responding to query on the Supreme Court judgement of February 2012 which cancelled 122 telecom licences that were allocated spectrum in 2008, Sibal said that the apex court passed the judgement in its attempt to do the best it could do in the interest of the nation, and it was a wrong decision.

Asking the BJP to desist from "smear campaigns" and levelling false accusations as it did in the 2G spectrum case, Congress leader Shashi Tharoor said, "After all this smear campaign and election jumlas, see what the court has said. People resort to unfounded allegations against rivals. There may be differences in the policies but it is not right to mount false accusations."

Speaking with reporters, Tharoor said the present government`s claim to have earned several thousand crore rupees more than the United Progressive Alliance (UPA) government from the spectrum auction is a "matter of policy difference and not corruption".

As balloting was on in the R.K. Nagar Assembly constituency in Chennai, Stalin told reporters: "A historic judgement has been given... The case was filed in 2009. (It) was filed to defame and obliterate a political party."

Hundreds of DMK activists trooped to the party headquarters here and celebrated the verdict. They burst firecrackers and distributed sweets.

Meanwhile, the shares of companies linked to the 2G spectrum scam case surged up to 20 per cent after the court verditc.