As per NIRF Ranking 2021, IIT Madras secured the top position in the 'Engineering' colleges category. Furthermore, IIT Madras has bagged the Top Rank in ‘Overall’ category for the third consecutive year. 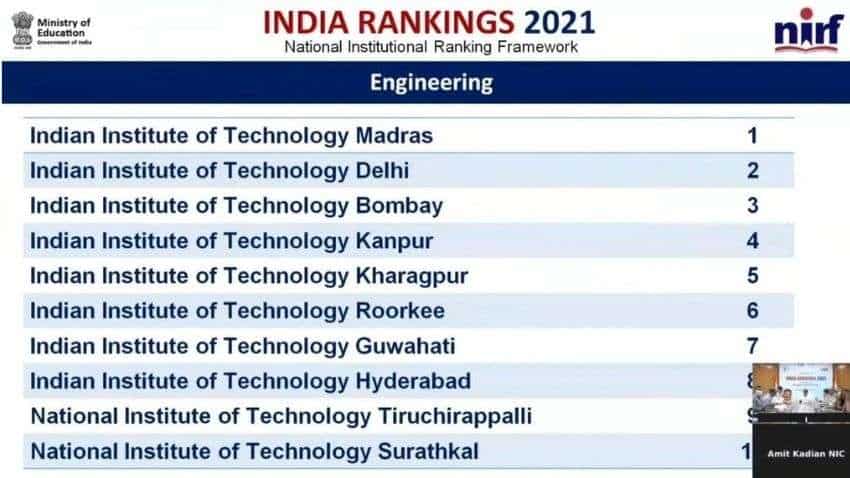 Check list of top 10 engineering colleges in the country

Engineering College Rankings: Union Education Minister Dharmendra Pradhan on Thursday released the National Institutional Ranking Framework (NIRF) 2021 rankings. It has to be noted that NIRF was approved by the MHRD and launched by Honourable Minister of Human Resource Development on September 29,  2015. According to the NIRF website, this framework outlines a methodology to rank institutions across the country.

According to the NIRF 2021 ranking, the top 10 engineering colleges in the country are as follows:

I congratulate all the premiere institutions from across India who topped the rankings in their respective categories— overall, universities, engineering, management, college, pharmacy, medical, architecture, law, dental and research institutions. pic.twitter.com/XPWzDZcCpI

The engineering colleges that ranked between 11 and 20 in the NIRF Ranking 2021 are as follows:

The NIRF methodology draws from the overall recommendations broad understanding arrived at by a Core Committee set up by MHRD, to identify the broad parameters for ranking various universities and institutions. The parameters broadly cover  'Teaching, Learning and Resources', 'Research and Professional Practices', 'Graduation Outcomes', 'Outreach and Inclusivity' and 'Perception'.