Eicher Motors, Royal Enfield's parent company, stock shot up on Thursday as news of its bid to acquire Ducati went through. 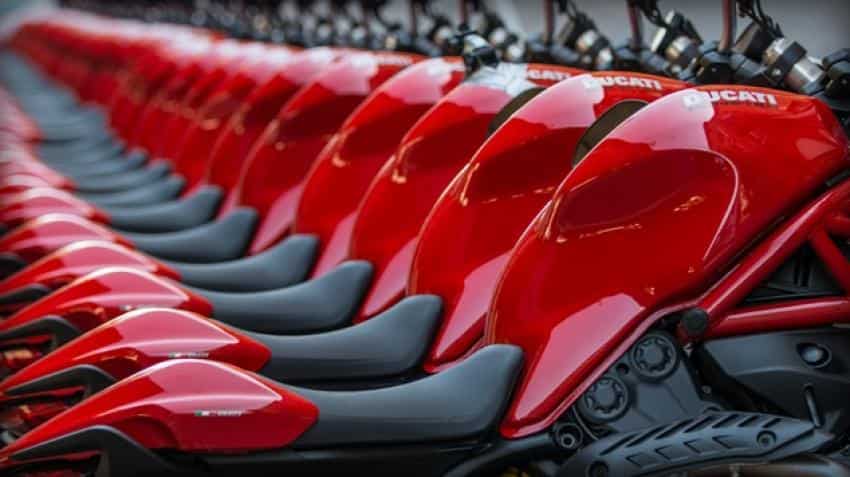 Eicher ready to bid up to $2 billion for Ducati - paper

Royal Enfield is still in the race to buy Italian motorcycle manufacturer Ducati as it recently made a $1.8-2 billion (over Rs 12,000 crore) bid for the company. This send its shares of parent company Eicher Motors racing up to 3.4% on Thursday.

Eicher is believed to be the only Asian company left in the auction and is currently finalising terms with advisers ahead of the scheduled bid deadline of end September, the newspaper said, said an Economic Times report quoting unnamed sources.

German carmaker Volkswagen is considering options for Ducati, including a sale of the brand, wholly controlled by VW's Audi division.

If Royal Enfield does manage to acquire Ducati, it will mean a big win for the company which is already one of the most profitable two-wheeler companies in the world.

One of the first things that will benefit Royal Enfield is the state-of-the-art technology that is used in the Ducati bikes. Most of them use a powerful V-twin engines and the next generation Ducati superbikes will have a V4 engine.

However, Royal Enfield's acquisition of Ducati will be the most beneficial in tackling the competition gearing up from Bajaj Auto.

Bajaj Auto has made its intentions clear that it is trying to take on Royal Enfield with the launch of Dominar 400 and pitting it against Royal Enfield's motorcycles. While Bajaj Auto, Managing Director, Rajiv Bajaj made it clear that the Dominar will try to take some of the sales in the segment, its TV ad campaign was clearly seen taking a swipe at the cruiser bike.

More recently Bajaj Auto's partnership with Triumph Motorcycles last month as part of global deal is a more serious threat to Royal Enfield's market share in the country and export markets such as Latin America, South Asia and Africa.

This partnership means that Bajaj Auto finally has that missing piece in their product portfolio, with it now adding the cruiser segment bikes of Triumph.

Bajaj Auto and Triumph have already started working on motorcycles and the first motorcycle models of this partnership could be out in the country as soon as 2019.

Bajaj Auto with its partnership with Triumph will develop a range of mid-capacity (250-750cc) motorcycles. These motorcycles will cater to the Indian market and other emerging markets such as those which Bajaj Auto exports to.

For Bajaj Auto it signifies an even greater win as it has been looking to make an entry into the mid-capacity segment (250cc to 750cc) of bikes which has been dominated by one player, Royal Enfield.

The size of the mid-capacity segment is estimated at about 1 million motorcycle sales annually.

Royal Enfield, which caters to the 350-535cc bike segment, has still managed to dominate the segment with over 70% market share. Royal Enfield, in fact, today has almost 7-8% of the total two-wheeler marker in India due to its dominance in its segment.

All the more reason why Royal Enfield wants to protect this market share and fuel to push for the acquisition of Ducati, which could help it give competition to Bajaj Auto in the sports bikes segment. The segment is one of the fastest growing in the country.

Eicher ready to bid up to $2 billion for Ducati - paper