The slowdown in consumer demand has been felt even in the first fifteen days of September, but I am optimistic that things will change in the festive season, says Anand Agrawal, CFO, V-Mart, on a candid chat with Zee Business. 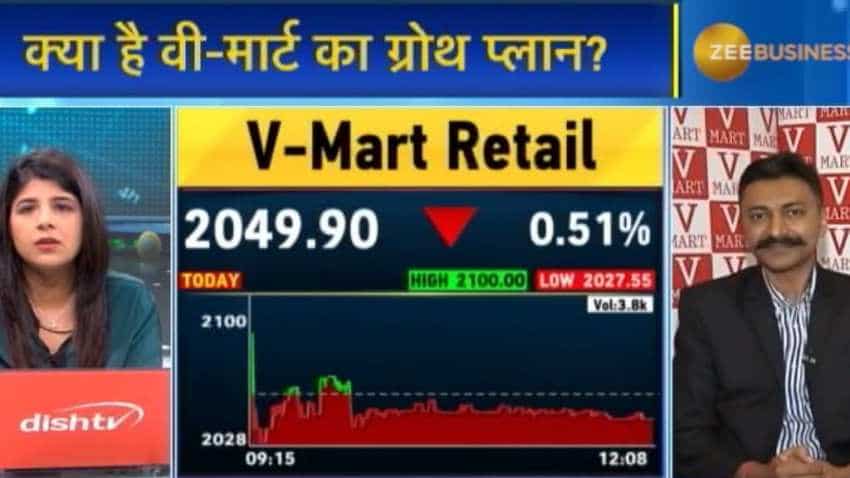 Anand Agrawal said, “Government should take steps at different levels to encourage sentiments at the ground level which is weak due to monsoon." Image source: Zee Business

The slowdown in consumer demand has been felt even in the first fifteen days of September, but I am optimistic that things will change in the festive season, says Anand Agrawal, CFO, V-Mart. In a candid chat with Swati Khandelwal, Zee Business, Mr Agrawal said, “Government should take steps at different levels to encourage sentiments at the ground level which is weak due to monsoon and lack of employment opportunities for daily wage earners”. Edited Excerpts:

Q: Consumer demand has been very weak in the recent past. Can you see any sign of recovery and how optimistic you are that things will turn around and become better during this festive occasion?
A: Slight slowdown has been visible even in September (the number that has passed in the month) while we were hoping more and are quite optimistic about the upcoming festive season. The footfalls have been low for all these many days of September. However, Durga Puja atmosphere has begun, and we hope that the demand will peak up in next 5-7 days at least in the Eastern part of India, where Durga Puja is celebrated in a big way. But as of now, the conditions have remained weak even in the first 15days of September.

Q: Suggest concrete steps that the government should take at this point of time to revive the demand?
A: There is a need to work at different levels, although, the government has taken several steps. We are seeing better policies through regular updates, but the sentiments are quite weak at the ground level due to certain reasons like the monsoon, minimum wages and lack of employment opportunities for daily wage earners. Thus, rural consumption will not pick up until and unless there is a revival or income growth of those who are working on farms or are associated agricultural sector. Non-revival of the rural-consumption will have a spill-over impact on the entire economy as we have seen during the slowdown in the past 3-4 months. So, at the ground level, I would like to request to the government do something betterment of people connected with agriculture by either by assuring minimum support in prices or by generating means of employment or increase infra spend. Such steps may support them including the daily wagers to earn something and get a power to increase their consumption.

Q: Name the pockets/clusters where you are willing to open new stores and provide the numbers on which you are working at present?
A: We are eyeing on East India and are opening more stores in East and North-East India. Besides, we keep a close tab on almost every pocket where we have an existence. Secondly, under our cluster-based expansion model, we like to open more stores either in the city where we have our presence or in the neighbourhood cities. We have a target of opening around 60 stores this year against 44 stores which were opened last year.

Q: You have revised your SSSG (same-store sales growth) guidance for FY20 to 5-8%. Do you think that this target can be outperformed by the end of the year?
A: No, there is no such hope right now. The current market traction makes me feel that it will stay between 5-7%. In the first quarter, our SSSG stood at 5% but it seems that it will be a hard task to maintain the same levels in the second quarter amid the ongoing environment. But we are quite optimistic and have great hopes with the third quarter because the three main festivals, namely Durga Puja, Diwali and Chhath falls in the same quarter. Plus, it will also be backed by the winter season that begins in the same quarter. This makes me feel that we will be able to post a full-year SSSG of 5-7%.

Q: You have been investing in warehouses and latest IT infrastructure among others to improve the sales. How much investment has been planned for this financial year?
A: Our total CapEx for FY20 will stand between Rs100-120 crores. We have a firm belief that the ongoing slowdown is a temporary period and is a cycle. At such a time, we have a strategy of strengthening ourselves through expansions, which are not planned for a short period of six months or so. Our stores are opened with an average lifecycle of around 10-20 years. So, we want to continue with our thought process and working to improve our capabilities and efficiency to make sure that we are benefitted the most whenever there is a revival in the market. Thus, we haven’t put any brake on our total investment and will continue to keep at the aforesaid levels.

Q: What are your current share in private label and the strategy to increase its penetration and how it will contribute to your overall revenue?
A: Private label has a contribution of around 67% to our revenue at present and we want to take it up to 75% in the next year. However, we don’t want to increase it more than this (75%) levels because we also want to keep and provide market-level variety to the customers in our stores. We have improved a lot on the private label not only in terms of designs but also in terms of product quality and have also worked on sourcing capabilities in the private label. Customers have started recognizing our private labels. We have also improved a lot on our instore branding and visual merchandising. Besides, we have also launched our online retail by the name https://www.vmartretail.com/ in the recent past. The platform will also be further used to increase our private label strategy.

Q: What is your strategy amid increasing competition from unorganised players and have you targeted any stores or brands for acquisition?
A: Although there is a slight weakness in the market but we don’t have any inorganic plans at present. We are focusing on strengthening ourselves and grow organically because the market is still very big. It is a big opportunity to conquer through our investments and that’s why we are not eyeing on any player or brand or label at present for acquisition purposes. But having said that we are but aggressive at present and will play aggressively in the market through advertisements and promotions. We have successfully acquired more market share in the first quarter from our competitors and will try to be aggressive throughout the balance part of the year.