The de-escalation came after 8,000 steel workers protested on Wednesday, the day the Essen-based company announced improved annual results and a record order book, demanding guarantees to preserve jobs and production sites for 10 years. 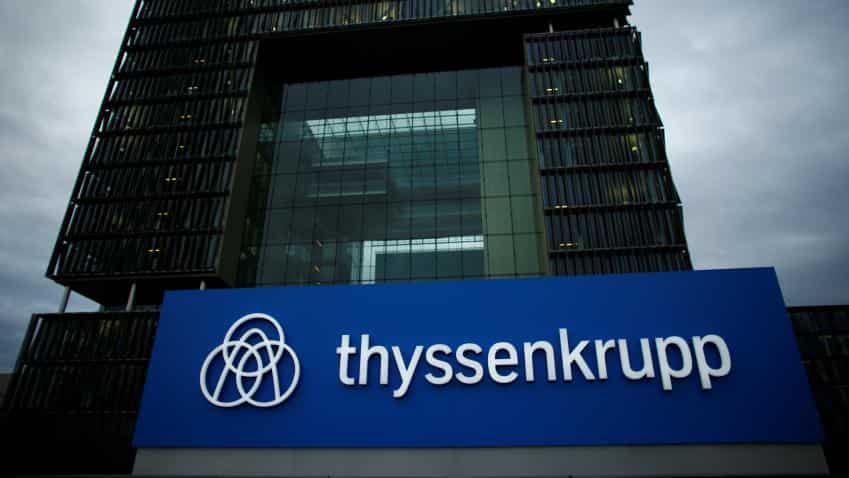 A logo of ThyssenKrupp AG is pictured outside their headquarters in Essen. Photo: Reuters

Managers and labour leaders at Germany`s ThyssenKrupp have struck a conciliatory tone as they seek to resolve a dispute over job cuts resulting from a planned merger of its steel operations with those of India`s Tata Steel.

The de-escalation came after 8,000 steel workers protested on Wednesday, the day the Essen-based company announced improved annual results and a record order book, demanding guarantees to preserve jobs and production sites for 10 years.

"The negotiations started in a matter-of-fact atmosphere," a company spokesman said late on Friday after a working group held a first round of talks.

A spokesman for the IG Metall trade union said the two sides had agreed on two of its demands - for an independent appraisal of the deal, as well a study of the risks arising from Tata Steel`s pension obligations to its British workers.

Managers from both companies will inspect each other`s production sites over the next two weeks to examine their respective operational fitness.

Thyssenkrupp and Tata Steel in September announced plans for a joint venture that would create Europe`s second-largest steelmaker after ArcelorMittal. The merger would result in up to 4,000 job cuts, although workers fear the toll could end up higher.

Chief Executive Heinrich Hiesinger has said the deal actually offers the best chance to preserve jobs as ThyssenKrupp, which employs 27,000 people in its steel division, seeks to diversify into more promising businesses like high-tech elevators and car components.

"Everything that will be negotiated and possibly agreed will depend on our judgment of these appraisals," IG Metall said. "The same applies: If (the merger) is not economically viable it doesn`t represent a concept that IG Metall can support."
(Reporting by Tom Kaeckenhoff; writing by Douglas Busvine; editing by Alexander Smith)