Under pressure from activist investors, Thyssenkrupp had tried to merge its steel unit with Tata Steel`s European operations, and split the rest of the German conglomerate in two, in an attempt to allow the value of its industrial businesses to shine. 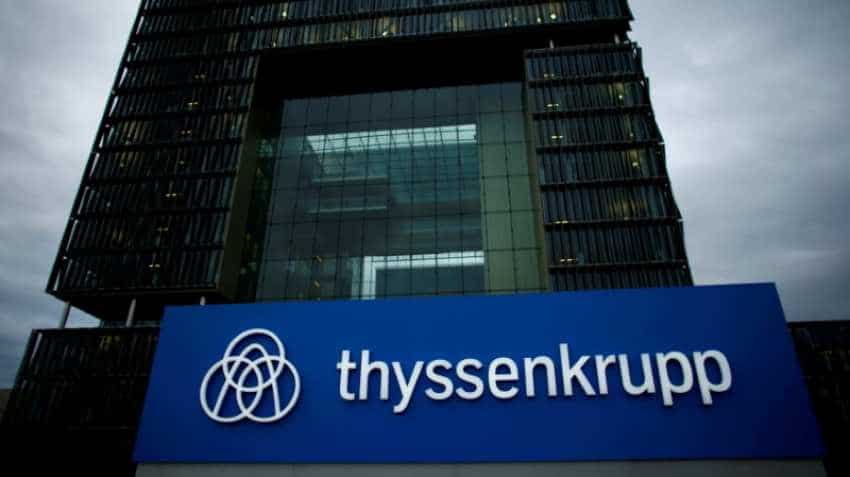 Meanwhile, Tata Steel said it would explore all options for its European business, including finding a new partner and selling assets. Image source: Reuters

Thyssenkrupp said it would embark on a fresh restructuring and list elevators, its most successful business, on Friday as regulatory opposition scuppered plans to hive off its steel division, unravelling a wider revamp. Under pressure from activist investors, Thyssenkrupp had tried to merge its steel unit with Tata Steel`s European operations and split the rest of the German conglomerate in two, in an attempt to allow the value of its industrial businesses to shine.

But after at least a year and a half in the planning, Thyssenkrupp and India`s Tata ditched the steel JV plan on Friday, saying they were not prepared to offer further concessions to satisfy European anti-trust regulators. Thyssenkrupp said it would now cut 6,000 jobs or 4 percent of its workforce, a third of them in the steel division, and pursue an IPO of the elevator business, worth an estimated 14 billion euros ($16 billion), twice the group`s market value.

Shares in Thyssenkrupp jumped by as much as 20 percent on the news, first reported by Reuters, setting them on track for their best day ever. Tata Steel shares closed down 6.23%. "The economic downturn and its effects on business development and the current capital market environment have led to the separation not being able to be realised as planned," Thyssenkrupp said in a statement.

The share price of Thyssenkrupp - which also makes car parts, engineers industrial plants, builds ships and trades metals - had more than halved since it first announced its joint venture plans together with Tata Steel in September 2017. Along the way, Heinrich Hiesinger had quit as chief executive, resisting pressure from investors for more radical change, swiftly followed by Chairman Ulrich Lehner.

Guido Kerkhoff, the former finance chief, took over as CEO last September after a months-long leadership vacuum.  Thyssenkrupp said its new plan, which involves introducing a holding structure to allow more flexible management of its varied portfolio, would lead to a net loss for the year.

Meanwhile, Tata Steel said it would explore all options for its European business, including finding a new partner and selling assets.

ACTIVIST PRESENCE
Thyssenkrupp has been the target of activist investor Cevian, which has an 18 percent stake, and Elliott Capital Advisors, which has a smaller holding in the conglomerate. "It is clear that Thyssenkrupp`s strategy of the past has failed," Lars Förberg, founding partner of Cevian said.

Pressure from investors seeking to realise greater value by breaking up conglomerates led General Electric to spin off its healthcare business and Siemens to announce it will separate its gas turbines business.

Kerkhoff`s idea at Thyssenkrupp was to separate higher quality capital goods operations of elevators, auto suppliers and core plant construction from its other more cyclical businesses.

He said he would now "swiftly prepare" but wait for the right moment for an elevators IPO, in which Thyssenkrupp would initially keep a majority.

Major shareholder Deka told the Rheinische Post newspaper that Thyssenkrupp`s about-turn was the right decision, allowing the company to manage its portfolio more actively, but should have come earlier.

"All stakeholders now believe that a fundamentally new direction is urgently needed to give the company`s businesses a future. There can be no historical or political taboos ... if Thyssenkrupp wants to sincerely tackle underperformance and get the businesses back to growth," Cevian`s Förberg said.

Specialised businesses are often more highly valued than conglomerates because in times of growth, high-potential assets do not have to compete for the combined balance sheet with businesses offering lower returns.

But rising trade tensions between the United States and China, and fears of a disorderly Brexit have dented share prices, forcing companies including Continental and Volkswagen to review plans for spin offs and listings.

Thyssenkrupp said it now expects to post an adjusted earnings before interest and taxes of 1.1 billion euros to 1.2 billion euros, and to post negative cashflow in the high three-digit million euros range for 2018-2019.