As far as NBFC is concerned then we have a 15.38% exposure. In that 2 group accounts were causing some concern and were treated as NPA with the first one being IL&FS group and the second one being Reliance ADAG, says Mahabaleshwara MS. 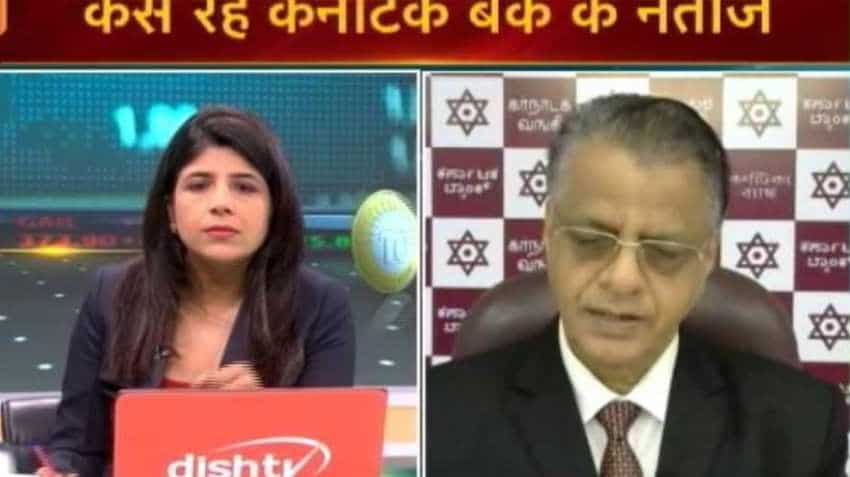 So, NBFC was a sector where we were concerned and there may not be any further surprise element, says Mahabaleshwara MS. Image source: Zee Business
Written By: ZeeBiz WebTeam
Edited By: Manas Tiwari
RELATED NEWS

This is the all-time high quarterly net profit for Karnataka Bank and it is powered by growth in interest income and other income, says Mahabaleshwara MS, Managing Director and Chief Executive Officer, Karnataka Bank. Speaking to Swati Khandelwal, Zee Business, Mahabaleshwara said we have an exposure of 15.38% in NBFC and two group accounts, namely IL&FS and Reliance ADAG were causing some concerns. Edited Excerpts:

What brought weakness in the asset quality of Karnataka Bank?
I assume that the net profit and EBITDA are at an all-time high quarterly net profit for Karnataka Bank and this was fuelled by very competitive and robust growth in the interest income, which has recorded around 12.56% growth. Also, the fee-based income has grown by 17.24%. The most interesting thing is the asset quality, so there is a reduction in the GNPA to 4.55% from 4.72% a year back. So, overall provision requirement also cleaned up and we had a cumulative provision of Rs710.55 crore of March 2019, now it stands at Rs648.36 crore. So, the core business has been given a boost for this type of performance of the bank during the first quarter of the financial year.

There is a 15.5% exposure of the bank in the NBFCs, how do you see at this concern? What is the exposure on IL&FS?
As far as NBFC is concerned then we have a 15.38% exposure. In that 2 group accounts were causing some concern and were treated as NPA with the first one being IL&FS group and the second one being Reliance ADAG. We have about 0.30% exposure in the Reliance ADAG group and we have treated it as an NPA.

We had considered IL&FS as NPA about a year back and under the IL&FS exposure, we had about 72% coverage ratio. This Reliance ADAG group, this is the first quarter when we have treated it as an NPA, is treated as substandard and we have around 15% coverage as an asset provision and no other additional accounts are showing stress in this category.

Name the sectors where you are facing concern?
We don’t have too much exposure in any of such sector and that is the beauty of our portfolio. So, NBFC was a sector where we were concerned and there may not be any further surprise element. Other sectors where our bank has exposure includes the retailers and the SME and the growth is on the expected lines in these sectors for instance housing has grown at 23.61% in Q1FY20 and the SME has also grown at the rate of 44.34%. Besides, there some good traction as far as the business is concerned in the area of equipment loans to the contractors since infra sector activities have picked up. A lot of contractors have availed good equipment loans from the bank and there the growth rate has been around 42.55%.

Going forward there are areas, the retail and SME, where we are focusing more, and we have already strengthened our credit department, which has three verticals (i) Credit Marketing (ii) Credit Sanctioning and (Credit Monitoring). The Credit marketing department is focusing on all these things. As a result, we will be taking good exposure on retail and SME which would help us in improving the yield in advances. Added to that, around Rs2500 crore of exposure to corporates, where there is the yield on advances, i.e. the interest rate was very low, and we have exited it in recent past and we are going to replenish it by the high yielding retail and SME advances.

This is a reason why I am quite optimistic that in future also our NII would show positive traction and we will be able to keep this growth of 20% that we created for the advances.

Update us on recoveries from NPAs and improvement in asset quality in the coming quarter?
There was the only thing that the Reliance ADAG where we had an exposure of around Rs138 crore and that was a major slippage at this time. Otherwise, no bigger concerns or threat. The next advances, which I had the highest exposure is of Rs38 crores in our portfolio. Apart from this, the asset quality is not showing any surprises and we are confident of containing the GNPA to below 4% by end of this fiscal and this is what we have planned in the beginning.

How much money you are expecting under recapitalisation from the government? When it comes to merger and consolidation then what is the status of your bank?
Recapitalisation is only for the government banks and we are in the private bank and thus we are not a beneficiary for that and as far as merger and acquisition are concerned then everything is rumour nothing is going on that front. As I said in the beginning that when I took charge of the bank about two years back we are committed to our identity and we are going strong if you compare our previous year’s performance also.