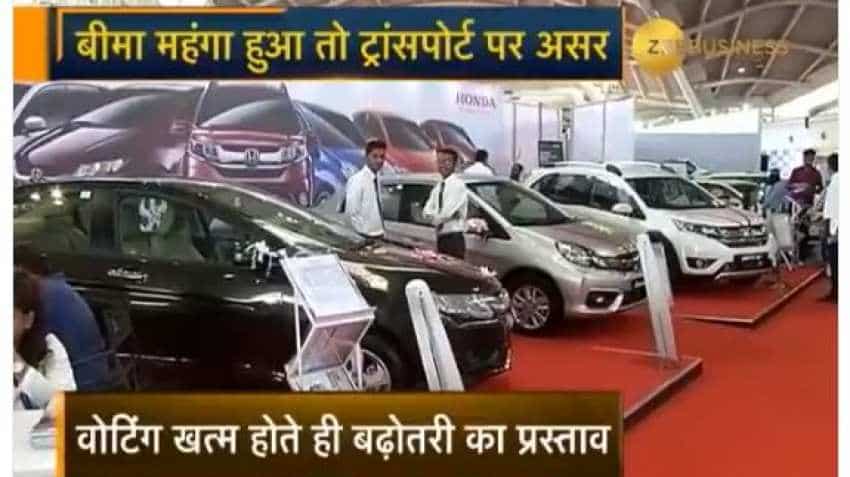 This is likely to hit auto sector badly as it is already reeling under impact of slow down and fuel hike. Image source: Zee Business

Immediately after elections, Insurance regulator IRDAI's proposal to increase third party (TP) motor insurance from 10 to 20% on different segment will come into effect. This is likely to hit auto sector badly as it is already reeling under impact of slow down and fuel hike, said experts on Zee Business TV, adding that the hike is being opposed by transporters' association citing various reasons.

Usually, third party motor insurance rates are declared from April 1st of every financial year, but this year it was not effected due to Lok Sabha elections, but now it will be implemented. Reacting over this IRDAI proposal, Girish Vagh, Head, commercial vehicles, Tata Motors, told Zee Business, "The slowdown in auto sector has come due to several reasons and insurance is one minor fact. In commercial vehicles, our customer buy vehicles for business after witnessing that their operate economics is better, and they will have profit after paying EMI on monthly basis and see if freight is available."

Further, report said that in the last few months, auto sales have witnessed a slowdown of 15%, and the increased rate of motor insurance will also pose a challenge. Transport association is protesting against this hike, saying  there is no data on which 10% increase on truck's insurance can be supported, and added that this will lead to hike freight charges by 3 to 4%.

Bal Malkit Singh, Chairman, All India Motor Transport Congress (AIMTC), told Zee Business, "In the last 5 years,  IRDAI has increased insurance, which has been opposed by transport industry. We need data, because this cannot be done on mere assumptions. Real time data is not available, and there are many other reasons like if cost increases then it should also be compensated from quarter."

Notably, after Supreme Court directive, Insurance regulator IRDAI from Sept 1, 2018 made it mandatory that long-term motor insurance for three years should be done.

The Insurance Regulatory and Development Authority (IRDA) on Monday issued a notification proposing to increase TP premium rates for cars below 1000 cc to Rs 2,120 from the existing Rs 1,850 for the financial year 2019-20. For cars between 1,000 cc and 1,500 cc premium has been proposed to be increased to Rs 3,300 from the existing price of Rs 2,863.