Only one-hour flight journey? Ticket may be capped to Rs 2500! 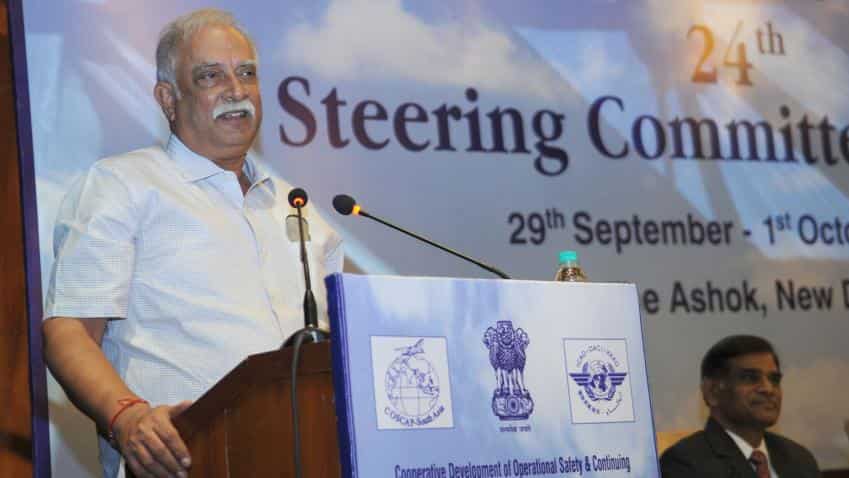 Raju said that during the Chennai floods, the airlines did help the government to evacuate stranded people. Photo: IANS
RELATED NEWS

There is a proposal to ensure that only Rs 2,500 is charged per ticket for one-hour flights, government told the Lok Sabha on Tuesday amid concerns expressed by members over exorbitant airfares. The government also said it will hold consultations with the airlines to explore the possibility of curbing the menace of charging exorbitant airfares during emergency situations.

"The Ministry will commence the process of consultations with stakeholders, including airlines, to explore possibilities ... Of containing fares," Civil Aviation Minister Ashok Gajapathi Raju said while replying to a debate on Demand for Grants for the Ministries of Civil Aviation and Tourism which was approved by the House later.

During the debate, members voiced concern over exorbitant airfares during emergency situations like unprecedented floods in Chennai and Srinagar and the recent Jat agitation.

Raju said that during the Chennai floods, the airlines did help the government to evacuate stranded people by operating flights from Arakonam air base to Bengaluru and Hyderabad.

He said airlines also came forward to operate additional flights during floods in Srinagar, earthquake in Nepal and the Jat agitation in Haryana.

When a member from Kerala complained of exorbitant fares on the Gulf route, the Minister remarked, "we can control only things in India".

Minister of State for Civil Aviation Mahesh Sharma said the government is working on strengthening regional air connectivity and in this regard, there is a proposal to ensure that only Rs 2,500 per ticket is charged for one-hour flights.

Raju said a comparative study undertaken by the Ministry for January-March 2013 and the same period during 2016 showed a reduction of 18.10% in airfares.

This shows that the airlines are passing the benefits from lower ATF (Aviation Turbine Fuel) costs to the passengers, he added.

In recent times, concerns have been expressed in various quarters about rising airfares despite fall in fuel prices, which account for over 40% of a carrier's total operating costs.

Raju denied knowledge of any proposal from Kerala government for starting an airline by the state government.

"There has not been even an application...Imaginary questions are being asked," the Civil Aviation Minister said, adding "We have not denied any airline that has applied... Four airlines have got permission (in the last two years)... No such Kerala airline has applied."

During the debate, Congress member K C Venugopal had said the Kerala government had proposed to launch an airlines Air Kerala that would mainly cater to people from the state living in Gulf countries. He asked the Centre to expedite the proposal.

On the purchase of 68 aircraft by Air India during the UPA regime, Raju said the matter is before the Public Accounts Committee (PAC) which has taken oral evidence and the matter is going to come up before the panel this month.

Raju said there has been robust growth in the civil aviation sector which has grown by 21% and at present, India is ninth in the world in terms of passenger traffic. The aim is to become the third largest civil aviation economy by 2022, he added.

The last two years have witnessed substantial growth in the civil aviation sector where the seats in flights have grown from 66,758 to 74,499 on daily basis, which is a 12% rise, he said.

The Minister said civil aviation regulator DGCA will soon provide as many as 166 services online and the first set in this regard will be launched this month.

According to Raju, all airlines are strictly adhering to the route dispersal guidelines and performace of all of them was in "excess of target".

The national civil aviation policy is being formulated in consultation with all stakeholders.
With regard to problems faced by Air India in its Boeing 787 fleet, Raju said some bottlenecks have been sorted out as spares were available.

He also said the Ministry is working on setting up no-frills airports. Sharma said despite the country's huge potential, it is getting only around 0.68% of the world's overall tourist arrivals. India received about Rs 1.35 lakh crore from foreing tourist arrivals last year, the Tourism Minister said, while noting that the sector provides about 12% of the employment in the country.

To promote medical tourism, Sharma said the government is looking to provide electronic visa (e-visa) for medical purposes. "This is our effort," he noted.

According to him, e-visa is being extended to people from 150 countries and the facility has helped in increasing the number of tourist arrivals. He also said that e-visa systems need reforms such as extending the validity and providing multiple entries.

"India is a safe country. India is not an unsafe country," Sharma said even as observed that safety is a matter of concern for everyone and a single incident can have multiple effects.

"Safety, security and hospitality are the pillars of tourism... We have tried to address all of them," the Tourism Minister noted.

On the Tourism Ministry not able to spend its budgetary allocation in the last fiscal, Sharma said that was due to introduction of new schemes for which there was delay from state governments in giving their detailed project reports. As a result, the funds could not be fully utilised, he added.

Crushing the coronavirus uncertainty will be the big 'unlock' for economies

IndiGo says few of its passengers have tested Covid-19 positive