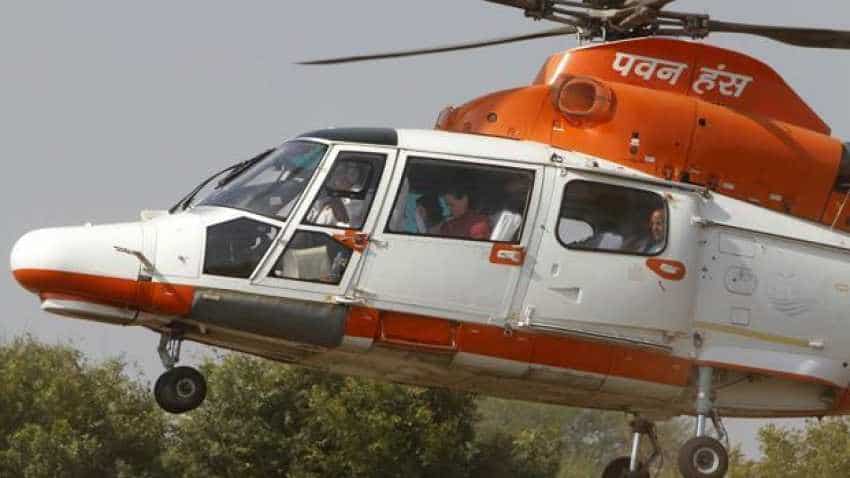 Despite the forum alleging irregularities in the whole process, the Narendra Modi government at the Centre is taking forward its disinvestment plans in Pawan Hans Helicopters (PHL) ahead of the general elections next year. Image source: Reuters
Written By: PTI
RELATED NEWS

Urging the government to address all employee related and social security matters before privatising profit-making Pawan Hans, the company's employees' forum Friday sought an urgent meeting with civil aviation minister Suresh Prabhu. Despite the forum alleging irregularities in the whole process, the Narendra Modi government at the Centre is taking forward its disinvestment plans in Pawan Hans Helicopters (PHL) ahead of the general elections next year.

"This joint forum on behalf of the employees request your office to give an urgent appointment for the settlement of major employee concerns before finalisation of the RFP/SPA document," Pawan Hans Joint Employees Forum (PHJEF) said in a letter to Prabhu Thursday. The forum comprises Pawan Hans Officers Welfare Association and its employees union, All India Civil Aviation Employees Union.

Demanding the government to extend the voluntary retirement scheme to its employees before transfer of management control as per the Department of Public Enterprises (DPE) guidelines, the forum said a trust for leave be formed immediately for the protection of leave balance available to each employee.

In Pawan Hans, the government holds 51 per cent stake through the civil aviation ministry, while the rest 49 per cent stake is with oil and gas behemoth ONGC. "The management must transfer/deposit the funds equivalent to each employee's balance leave of up to 300 days to the trust immediately which could be encashed by them whenever required or at any type of separation from the company," the forum added.

Besides, it has also sought protection of gratuity of employees as per the services rendered in the organisation and inclusion of this clause in the RFP/SPA document. The forum, in the letter, has also demanded the implementation of pension from the last month of the protection year to each employee, as per the corpus available of each employee with the Life Insurance Corporation of India.

On April 13, the government issued the information memorandum for the sale of 51 per cent stake in the profit-making Pawan Hans and had sought expression of interest (EoI) from interested bidders by June 18.

The eligibility criteria including financial net worth of the prospective bidders were fixed accordingly.

Later, fresh bids were invited after ONGC board in July decided to combine its 49 per cent stake in the offer for sale by the government. The last date for submission of initial bids was also extended to September 19.

In a separate letter to Prabhu last month, the forum had alleged irregularities in the firm's ongoing disinvestment process and urged the civil aviation ministry to "re-fix" the bidding norms/ eligibility criteria.