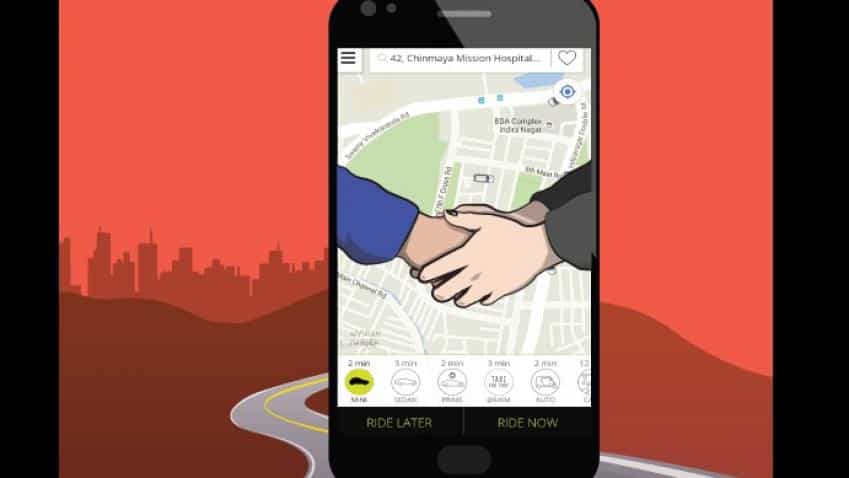 The reduced fare is applicable in all the 10 cities Ola Share is operational in. Image Source: Company website
Written By: ZeeBiz WebTeam
RELATED NEWS

Ola cabs on Monday announced the expansion of Ola Share, to three new cities - Chandigarh, Jaipur and Ahmedabad taking its total market share up to 10 cities in India.

The company said that with more users on the platform opting for shared cabs, the per kilometre fare for Ola Share has been cut down to Rs 3/km.

“Ola’s ‘user matching algorithm’ has resulted in maximum matching of users headed the same way, as well as ‘same route sharing’ ensures Ola Share users don’t go out of their way as the cab picks up or drops other users sharing the same cab. As a result, the per kilometre fare for Ola Share has now been optimised to just Rs 3,” the company said in a statement.

The reduced fare is applicable in all the 10 cities Ola Share is operational in.

Raghuvesh Sarup, CMO and Head of Categories at Ola, said, “The technology that we use to match users - ‘same route sharing’ - ensures that a majority of our rides are fully occupied and the on-route deviation time is minimal.”

“With immense demand for Ola Share and improved matching rate, we have been able to bring down fares to as low as Rs. 3/km, making Ola Share more pocket-friendly than ever,” he added.

The company stated that Bangalore, Hyderabad and Mumbai have emerged as top markets with some of the best ‘user matching algorithms’ and minimal en-route deviation percentages.

While Delhi, Bangalore and Mumbai have the highest volume of transactions per day, the company stated.

On account of increase in the demand for cab sharing the company stated that it has resulted in high savings in carbon emissions.

“In the last 8-10 months, Ola Share been able to able save upwards of 48 lakh kilograms of carbon emissions along with over 20 lakh litres of fuel as more and more people shared cabs. A recent unique two-week long campaign called #Doyourshare; accounted for savings of over 1200 tonnes of carbon emissions in just three metros - Delhi, Mumbai and Bengaluru,” the company said in a statement.