With around 6 million fast charging stations needed in India, the government would have to increase its spending on electric vehicle infrastructure. 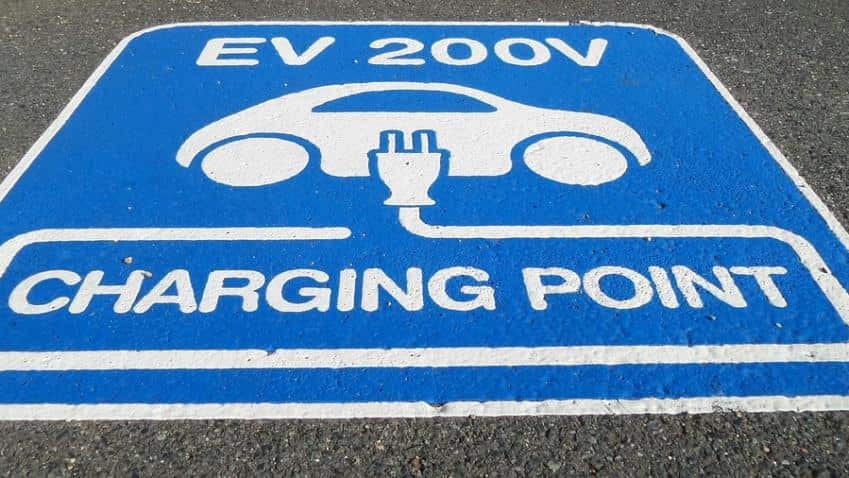 A sign on the road indicating a charging point for electric vehicles. Photo: Pixabay
Written By: Collin Furtado
RELATED NEWS

The Indian government has set an ambitious target of 2030 for selling only electric cars in India. While the target is over a decade away, there is still a lot of work to do in order to promote the buying of electric vehicles in India.

This shows the wide gap in the needed to be bridged for India to achieve the electric vehicle target.

Currently there are only 206 community charging stations available across India, according to a recent report by Indian Express.

In order to achieve the electric vehicle target by 2030 the government needs to set up around 6 million fast charging points across India considering if there are 30 million electric cars by that time (currently there are over 30 million registered cars in India).

Ever 1 fast charging point is enough to cater to 5 electric vehicles in a single day.

As the fast charging unit costs about Rs 3-4 lakh to set up, this means that the government would need to spend around Rs 1.80 lakh crore on setting up fast charging points and stations in India.

This is a huge amount that the government needs to spend if it is serious in achieving this electric vehicle target by 2030. However, it seems that this may be a bit difficult to achieve since the government has currently put very little money where its mouth is.

While there are various different types of charging infrastructure for electric vehicles, fast charging points or stations are the fastest, taking only about 37 minutes.

The fast charging capabilities are used by Tesla which is said to take only 15 minutes to charge the car completely.

Mahesh Babu, CEO, Mahindra Electric said, “As far as fast charging set ups go, typically a unit costs about R 3 to 4 lakh. Such fast charging set ups can cater to as many as 5 to 7 electric vehicles in a single day, making perfect business sense for fleet operators. With rapid improvement in technology, the efficiencies of these chargers is increasing and the costs coming down every day.”

Kapil Shelke, CEO and Founder of Tork says due to the time constraints currently in charging electric vehicles he says it does not make sense to setup electric charging points at current petrol and diesel pumps in India. “People today would have to wait for over half an hour to charge their vehicles at petrol and diesel pumps creating huge queues and congestion. If the charging stations can reduce the time to even 15 minutes it would make sense to set it up there,” he said.

Babu however says charge stations can be set up at regular petrol and diesel pumps. “In fact, we are in talks with several organisations with deal in fossil fuels at present, exploring suitable business models for them based on EV charging... The cost structure is the same for setting up a fast charging set up at existing fuel pumps or any other location,” he adds.

“At present such set ups are being approved by PESO (Petroleum and Explosives Safety Organisation) on a case to case basis. These have to adhere to PESO guidelines like distance from fuel dispensing unit, nearness to the exit etc,” Babu said.

As a result electric vehicle companies in India are promoting for setting up charging facilities in public areas such as car parks, commercial complexes and even in the parking spaces of buildings.

“Other locations like mall parking lots, restaurant parking lots or parking lots of commercial organisations can also prove to be ideal. People park their vehicles for longer durations making it very easy for them to charge while they spend time at the venue,” Babu said.

The normal charging station which can be used at homes also costs much cheaper. Shelke says the normal plug charger that can be used in homes costs around Rs 35,000.

The problem about this is that in cities such as Mumbai where people live in flats, it is impossible for people to charge their electric cars unless their parking space has a charging port.

However, the government seems to be tying up with private companies for setting up electric vehicle infrastructure in India. For instance, the 50 fast charging stations set up by Mahindra Electric across Bengaluru, Delhi and Nagpur has been installed in association with the government and fleet partners such as Ola cabs and Lithium.

Babu says, “To develop this network further, support from the government will be of utmost importance. Promoting public private partnership in this regard will bring together all the necessary stakeholders to get the right momentum in place.”

Even PSU company NTPC recently announced that it is ready to venture into the business of installing charging stations for electric cars in several cities in India.

With regards to the issue of different charging plugs by different electric vehicle manufacturers, many of the companies seem to working at creating standardised charging plugs and mechanisms.

“At Mahindra Electric, we have developed charging units based on all global protocols. We are also a steering member in the CHARIn committee in Europe, which works towards developing and establishing the Combined Charging System (CCS) as the standard for charging battery-powered electric vehicles of all kinds. We also work closely with the Government of India through SIAM and have been actively participating in developing the Bharat Standard for charging which will cater to both low and high voltage charging systems in India,” Babu said.

Similarly, Shelke said that they are following government guidelines in setting up charging plugs and mechanisms. “The ARAI (Automotive Research Association of India) and Niti Aayog has set up guidelines for charging facilities of electrical vehicles in India and we are following that,” he said.

While the target of 2030 seems a bit too ambitiousm, electric vehicle manufacturers seem to be positive.

“This is a commendable vision articulated by the government. World over, several studies are predicting a rapid disruption in mobility from the current model of personal fossil fuel based mobility to an electric, connected and shared model. And this shift is expected to become a reality within a decade or so,” Babu said.