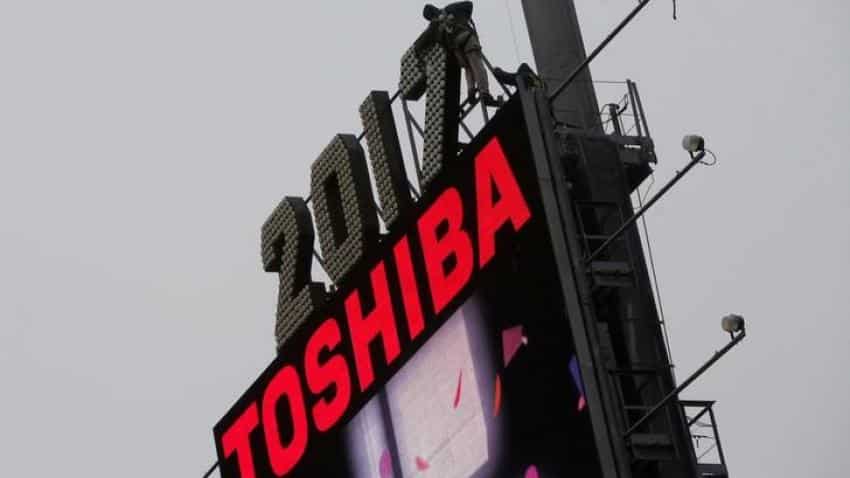 With mounting writedowns from its nuclear business, Japan`s Toshiba Corp is looking to sell part of its core semiconductors business, a world No.2 in the flash memory chips used in smartphones.

But its rush to plug a hole in its U.S. nuclear business that Japanese media now estimate at as much as $6 billion may complicate any asset sale.

Toshiba, which warned last month of multi-billion dollar charges for U.S. nuclear project cost overruns, wants to boost its capital base by the end of the financial year in March.

Failure to offset the nuclear hit could wipe out already thin shareholder equity and push the company into negative net worth - jeopardising its role in public infrastructure projects and its place on the Tokyo Stock Exchange`s `first section`, for larger companies.

Following a 2015 accounting scandal, the conglomerate is barred from raising fresh funding on equity markets. Selling assets, though, could help it win broader financial support from its main banks.

Toshiba could sell 20-30 percent of its chip business, according to media reports.

The business, worth more than $10 billion, is the world`s second largest after Samsung Electronics in flash memory chips - and it`s Toshiba`s most profitable.

Operating profit is forecast at 130 billion yen ($1.13 billion) for the year to end-March, accounting for the bulk of overall group profit, forecast at 180 billion yen. Those forecasts were made before its December warning of the U.S. nuclear charges.

People with knowledge of the matter said Toshiba has begun preparations to sell a minority stake in its chip business. One person said non-disclosure agreement forms have been sent to some private equity funds.

Other people familiar with the matter have said potential buyers of a stake include Western Digital Corp, both a rival and a business partner, with a pledge to invest $5 billion to jointly produce memory chips.

Any deal with Western Digital, however, could trigger a time-consuming antitrust review.

"The short timeframe (for raising funds) could be a hurdle as (such) a capital infusion could raise antitrust concerns," a Toshiba executive said, noting such a review could take more than a year to complete.

The person declined to be named due to the sensitivity of the issue. "Investors with no antitrust concerns will be preferable, but they tend to seek quick returns, so there are difficulties here as well."

"For some investors, the semiconductor business may be a central part of Toshiba`s appeal," Goldman Sachs analysts wrote last week. "If Toshiba were to divest a stake in this business, we see a risk that the parent company`s profile could become less attractive to these investors."

Buoyed by its chip business, Toshiba shares had risen 85 percent last year before its warning on its nuclear business. The stock ended 2016 up just 13 percent.

"It used to be said we were two years behind Samsung (in 3D chips)," Yasuo Naruke, head of Toshiba`s chip business, told Reuters last month. "But we were faster in (64-layer chip) sample shipments, so we believe we`ve caught up with Samsung technology-wise."

Naruke noted, though, that Toshiba still has less experience in mass producing the new chip.

A stake sale could help with that, as Toshiba plans to increase its investment in chips to around 1 trillion yen ($8.7 billion) for the three years from April 2019, up from 860 billion yen for the previous three years.

As Toshiba has ruled out ceding control of the chips business, it may also seek state help, as other troubled Japanese technology companies have done in previous restructurings, the sources said.

"We need to have various options on the table as the scale of the (nuclear) impairment charge has not yet been finalized. But we`ll never give away a majority," the Toshiba executive said.

Another person familiar with the matter said the state-run Development Bank of Japan is among several funds Toshiba may approach for possible investment in its chip business, though the bank could be put off by the size of investment needed.