Amazon India will soon deliver your items in electric rickshaws. The e-commerce giant Monday announced that it is rolling out a new fleet of electric delivery rickshaws in India. 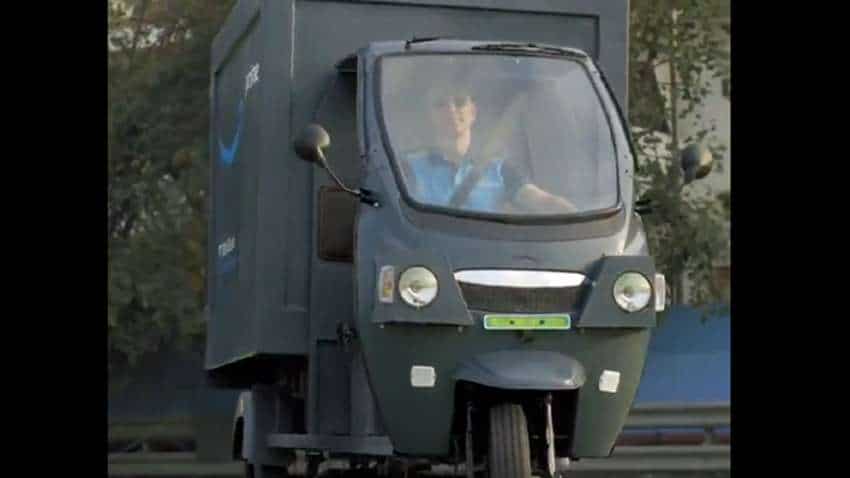 Amazon India will soon deliver your items in electric rickshaws. The e-commerce giant Monday announced that it is rolling out a new fleet of electric delivery rickshaws in India. In a tweet, Amazon founder Jeff Bezos gave a glimpse of the new electric rickshaws which will have zero carbon emission. "Hey, India. We’re rolling out our new fleet of electric delivery rickshaws. Fully electric. Zero carbon. #ClimatePledge," the tweet read.

Along with this, Bezos also shared a video on Twitter in which he can be seen driving one of the e-rickshaws. The Amazon boss is currently in India and has taken part in several events and initiatives.

He had recently announced Amazon's plans to invest US $1 billion to digitally enable micro, small, and medium enterprises (MSMEs) and traders across India, including manufacturers, resellers, local offline shops, and brands. “We’re committed to being a long-term partner of India. And actions speak louder than words,” said Bezos.

“Over the next five years, Amazon will invest an incremental US$1 billion to digitize micro and small businesses in cities, towns, and villages across India, helping them reach more customers than ever before. This initiative will use Amazon’s global footprint to create US$10 billion in India exports by 2025. Our hope is that this investment will bring millions more people into the future prosperity of India and at the same time expose the world to the ‘Make in India’ products that represent India’s rich, diverse culture," he added.

There are more than 550,000 sellers on the Amazon India marketplace and more than 60,000 Indian manufacturers and brands are exporting their “Make in India” products to customers worldwide on Amazon. Amazon believes that the latest investment will help Indian MSMEs grow their cumulative exports to US$10 billion by 2025 through the Amazon Global Selling program, which enables businesses to sell on Amazon marketplaces globally.