Commercial vehicle maker Daimler India, which recently set up 10 new touchpoints, plans to have at least 350 dealerships pan-India in the next two years as it looks to deepen market penetration and take its range of products more closer to customers, a top company executive has said 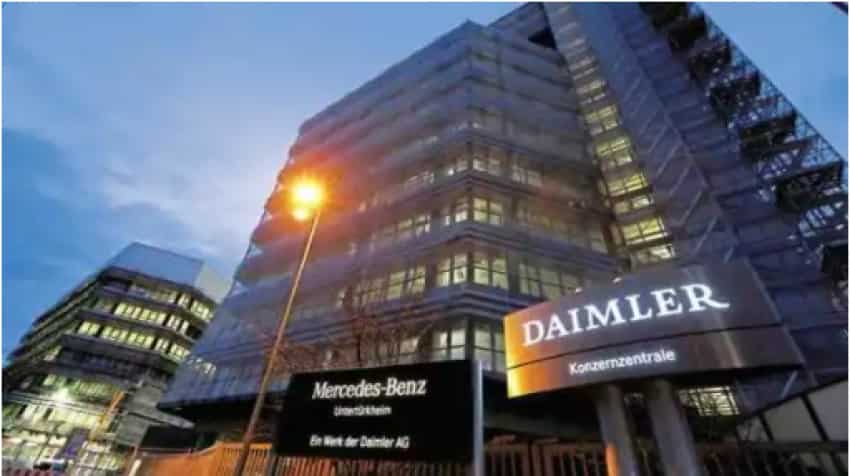 Daimler India has its manufacturing facility in Orgadama, near Chennai, where it produces 9 to 55 tonne trucks as well as BharatBenz buses, Mercedes-Benz coaches and bus chassis. Source: Reuters
Written By: PTI
Edited By: ZeeBiz WebTeam
RELATED NEWS

Commercial vehicle maker Daimler India, which recently set up 10 new touchpoints, plans to have at least 350 dealerships pan-India in the next two years as it looks to deepen market penetration and take its range of products more closer to customers, a top company executive has said.

The Chennai-based company, which is a subsidiary of the Stuggart-headquarted Daimler, is also focusing on higher digitalisation, including in its sales process, and has plans to add more value-added offerings to customers going forward.

Daimler India has its manufacturing facility in Orgadama, near Chennai, where it produces 9 to 55 tonne trucks as well as BharatBenz buses, Mercedes-Benz coaches and bus chassis.

"We are the only commercial vehicles maker in the country which is expanding the dealership network. Last year we ended at 230 touchpoints and this year our target is to have more 250 touchpoints by the end of this month. Our final picture is to have minimum 350 dealerships by 2022," Daimler India Commercial Vehicles (DICV) Managing Director and Chief Executive Officer Satyakam Arya told PTI.

He further said that the network expansion is part of the announcement made last year and it is definitely going to be a focus area for the company in the next two years.

DICV last month set up 10 touchpoints in a single day, which increased its servicing capacity by 13,000 vehicles a year. Also, together the new facilities will add around 300,000 sq ft of workshop space including more than 40 mechanical bays. With this, dealer network will now be able to service over 40,000 vehicles a month.

In January at the time of unveiling its BS-VI range, the company had also unveiled two new telematics solutions - Truck Connect and Bus Connect, which allow operators to track and analyse their vehicles in real time and also launched a mobile app 'ProServe', through which a customer can do more than 65 transactions, including advance bookings for service, renewing service contracts and insurance, among others.
"What we are doing now is we are digitalising our entire sale transaction, in which right from generating a lead to closing a sale deal will be done on a tab. So the entire customer interface with us will become digital," he said.

In addition to this, we are also working on a lot of digitalisation, including that of the internal business processes, in the company and there are more than such 24 projects going on.

Due to COVID-19, the entire digitisation initiative will be accelerated by at least 10 years, he added.

Arya said in the last 5-6 months, the automobile industry has started to recover very well, but the picture varies from segment to segment.

"At BharatBenz, we have done phenomenally well, especially post BS-VI launch. The MHCV (medium and heavy commercial vehicle) industry is lower by 60 per cent but we are lower by only 26 per cent, which means we have done much better. We have been growing year-on-year since August more than double digit and have in fact, more than doubled our volumes in October compared to last year. We are doing phenomenally well in spite of such a market," he said.

On the industry performance, he said that while the passenger car segment has seen double digit growth on account of pent-up demand due to personal mobility, a trend which was also reflecting in the two-wheelers segment, adding that the tractor segment is also doing phenomenally well due to the agriculture sector doing well.

"But there is a mixed picture in the CV segment as demand in three-wheeler is yet to come back and is struggling a lot. In the MHCV segment, the LCV segment is doing well on account of agriculture sector and last-mile delivery of goods but MHCV segment is still struggling and is down by about 60 per cent while the demand for buses also remains quite subdued due to work from home and school colleges remain closed," he said.

The demand for buses was 60-70 per cent lower in the January-November months compared to the same period of last year, he said, adding that "post-Covid, the volumes are down 90 per cent over the year-ago period".

"But these segments will also pick up as we have seen good pick-up in economic activity in the last few months and as the situation starts to normalise, we expect going forward the demand will be much better," Arya said.

Looking forward, the industry recovers now from here and "we can all come back to normal", he added.

Stating that the volumes have been better in October-November compared to last year in the sense of uptick from the festive season.