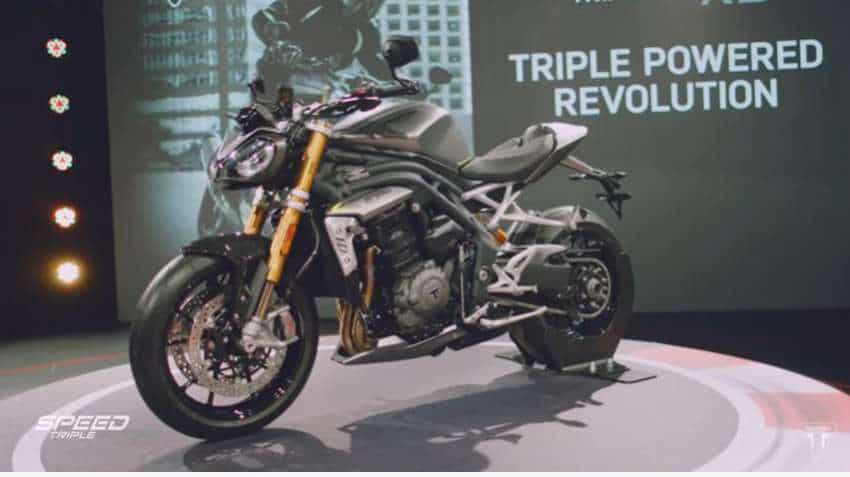 It has a brand new 1160 cc three-cylinder engine with 180 PS of power, which is a significant 30 PS increase from the 2018 model. Source: Triumph/Youtube
Written By: ZeeBiz WebTeam
Edited By: Harish Dugh
RELATED NEWS

Triumph Speed Twin: What makes this vrooming machine so special? Features, its utilities explained with pics

High-end bikes to get cheaper as govt slashes import duty

The last update before this was done in 2018 and this latest version of the Triple RS is the fastest and most-powerful Speed Triple ever that the company has done. This bike has been upgraded from 1050 to Speed Triple 1200 RS and this will be the flagship street-naked motorcycle by Triumph.

Interestingly, Triumph says that there will be no ‘R’ or ‘S’ variant of the Speed Triple as it will only come with the top-spec RS version.

The Triumph Speed Triple RS which was unveiled on Tuesday has these exciting features:

It has a brand new 1160 cc three-cylinder engine with 180 PS of power, which is a significant 30 PS increase from the 2018 model, along with 125 Nm of torque which is again 8 Nm more than the model the previous model.

The British company has also reduced the weight of its latest offering in Triumph Speed Triple 1200 RS by making it 10 Kg lighter than the previous version. The reduction in weight is because of much lighter engine now. The company also claims that the engine is much more responsive than the previous version.   There is a brand new 6-speed gearbox complementing the engine with a slip and assist clutch along with a new generation of Triumph’s quick shifter that works both for upshifts and downshifts.

As for the designs, the all-new Triumph Speed Triple 1200 RS looks is bigger in size. The company has introduced a new cast aluminium frame which is 17 per cent lighter than the previous generation, which is a departure from the under-seat exhausts. It said that this lends a much more balance to the bike.

Also, the new chassis has been designed to handle the power of the 1200 RS and also give it much more nimbleness.

Triumph Speed Twin: What makes this vrooming machine so special? Features, its utilities explained with pics

High-end bikes to get cheaper as govt slashes import duty