The leaders of Brazil, Colombia and Brazil, along with the Foreign Minister of Canada, issued a joint statement Wednesday to offer their countries' backing to Juan Guiado, leader of Venezuela's opposition-controlled Parliament after he had declared himself Interim President. 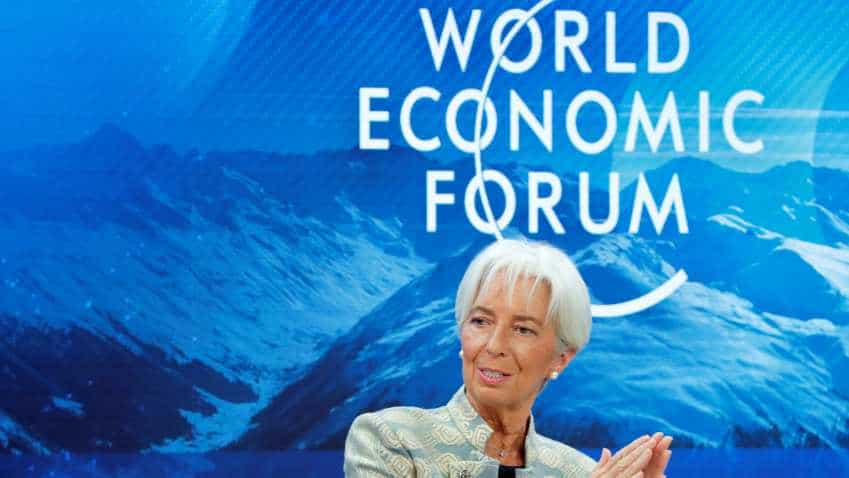 A group of 70-plus countries confirmed intentions to commence WTO negotiations on trade-related aspects of e-commerce following a ministerial meeting on the margins of the Davos meeting. Image source: Reuters
Written By: PTI
RELATED NEWS

As the World Economic Forum Annual Meeting 2019 came to an end Friday after five days of brainstorming by over 3,000 leaders across hundreds of sessions, the organisers said the event this year made an impact on the world in as many as 33 ways. The WEF listed Prime Minister Shinzo Abe of Japan committing his country's G20 Chairmanship to launch an agenda for global data governance. Besides, a group of 70-plus countries confirmed intentions to commence WTO negotiations on trade-related aspects of e-commerce following a ministerial meeting on the margins of the Davos meeting on Friday.

Shortly before that, members of the Forum's business and civil society trade community issued a statement calling for a new digital trade deal that should be both ambitious and inclusive. The community urged governments to move forward with this agenda at the WTO in order to reduce costs and facilitate greater participation in the global digital economy.

The leaders of Brazil, Colombia and Brazil, along with the Foreign Minister of Canada, issued a joint statement Wednesday to offer their countries' backing to Juan Guiado, leader of Venezuela's opposition-controlled Parliament after he had declared himself Interim President.

Mohammad Ashraf Ghani, President of the Islamic Republic of Afghanistan, used his appearance at the annual meeting to commit his country to democracy.

Ghani used his address to remind participants that Afghanistan has passed 390 new laws since 2015 and significantly increased the number of women in politics.

The President of Azerbaijan and Prime Minister of Armenia used a meeting at the World Economic Forum to advance negotiations on the settlement of the Armenia-Azerbaijan Nagorno-Karabakh conflict.

The government of the UK announced a five-year plan to tackle the global threat of antimicrobial resistance. The plan envisages containing and controlling AMR worldwide by 2040.

The forum continued multistakeholder diplomacy dialogues aimed at advancing peace efforts on other key global fault-lines including the Western Balkans and Syria.

The forum also convened a public-private community of leaders for a Special Dialogue on Israeli-Palestinian relations.

With the help of Prime Minister Abiy Ahmed of Ethiopia, a diplomatic dialogue was held on the Horn of Africa.
Discussions were also initiated on the Sahel, the Korean Peninsula, European-Russian relations and on a new development architecture for Africa-Europe engagement.

The WEF's Closing the Skills Gap Initiative, launched in 2017 with a target to reskill or upskill 10 million workers by 2020, announced it has already secured pledges for training more than 17 million people globally, 6.4 million of whom have already been re-skilled.

Voice for the Planet, a global campaign to build a movement for a new deal for nature and people was launched on Tuesday during a plenary with former US vice president President Al Gore, Prime Minister Jacinda Ardern of New Zealand and Anand Mahindra of the Mahindra Group. The campaign garnered over 21,000 individual pledges within 48 hours.

The WEF's Centre for the Fourth Industrial Revolution Network, established in 2017, announced it had grown to more than 100 businesses and governments, including five G7 nations. UNICEF, OHCHR and WFP became the first international organisations to join.

The Indian state of Andhra Pradesh announced it was to adopt the Drone Innovators Network's Advanced Drone Operator's Toolkit -- a policy framework developed in collaboration with 10 civil aviation authorities, eight international governmental organisations and 23 private companies, as well as the governments of Rwanda and Switzerland.

The move paves the way for Andhra Pradesh to scale up commercial drone activity.

A pilot project to protect airports and other critical infrastructure from cyber-attacks was launched at the annual meeting.

A group of international businesses teamed to launch Partnership for Global LGBTI Equality.

Members of the Partnership agree to operationalise the UN's LGBTI Standards of Conduct worldwide across their business by 2020. The Partnership plans to enlist at least 50 other member companies by 2020.

The forum teamed with the World Bank and International Committee of the Red Cross to launch a High-Level Group on Humanitarian Investing to unlock private sector capital for investment in fragile economies.

25 global businesses announced they would work with Terracycle, a recycling specialist, to launch the Loop Alliance Initiative, a new concept of reusable packaging.

The scheme, which will involve customers paying a refundable deposit for the durable packaging with no extra fee for collection, will recover the environmental costs of production after three or four uses.

The Wellcome Trust committed USD 200 million over 5 years to improving our basic understanding of depression and anxiety.

The Global Youth Alliance was launched at the annual meeting by Facebook, Nestle and Nielsen to support skills for young people in emerging and developed countries.

Valuable 500, a new campaign aimed at releasing the social and economic potential of the 1.3 billion people around the world who live with a disability, will seek to sign up 500 global businesses to commit to putting disability on their board agendas in 2019.