Both the billionaires also traded barbs with one another, and Gates recorded the fun on video that he uploaded on his gatesnotes blog. 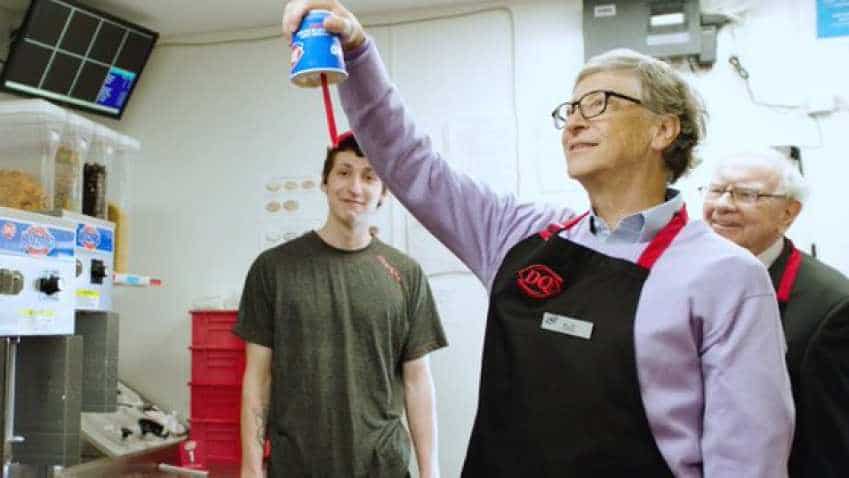 Two billionaires Warren Buffett and Bill Gates recently worked at a restaurant with workers for a short shift and the video of that was later shared by Microsoft founder Bill Gates at his Twitter account saying "Patience: it's a valuable skill for investing and for training new employees at Dairy Queen.. "  According to reports, 63-year-old Bill Gates and Berkshire Hathaway's  chairman Warren Buffet put on apron and name tag like other workers of the ice-cream and fast food restaurant Dairy Queen.  Notably, Berkshire Hathaway had bought the restaurant chain in 1998.

The DQ manager reportedly trained the duo to dispense soft-serve ice cream into cones, work the register, and interact with customers. Both the billionaires also traded barbs with one another, and Gates recorded the fun on video that he uploaded on his gatesnotes blog.

Last month, Buffet and Gates reportedly thought of doing something different sparing a little from their annual meeting of Berkshire shareholders.

Gates later wrote on his blog "Every time I get to see Warren, I'm struck by his surprising, insightful, 'upside-down' view of the world. He thinks differently -- about almost everything."

Warren and I recently picked up a @DairyQueen shift. I think I may have been a quicker study in the Blizzard department, but watch the video below and judge for yourself: https://t.co/BJc1nV4kpa pic.twitter.com/J1NgS0EbfE

The blog titled as "Grilling and chilling with Warren" says, "If you’ve ever been to a Dairy Queen, you’re probably familiar with one of their most popular menu items, the Blizzard, soft serve ice cream mixed with sundae toppings, cookies, brownies, or candy. You might also be aware that every Blizzard is served upside down—a surprising piece of fast food performance art to prove that each treat is so thick it will defy gravity."

He added, "During my visit to Berkshire Hathaway’s annual meeting in Omaha last month, I learned more about Warren’s sweet tooth. Warren and I broke away from the meetings to visit a Dairy Queen for some lunch and to get some restaurant training. We learned how to work the cash register, greet guests, and make a Blizzard (including the proper way to serve it, “Always upside down with a smile!”) I think I may have been a quicker study than Warren in the Blizzard department but watch the video above and you can judge for yourself."