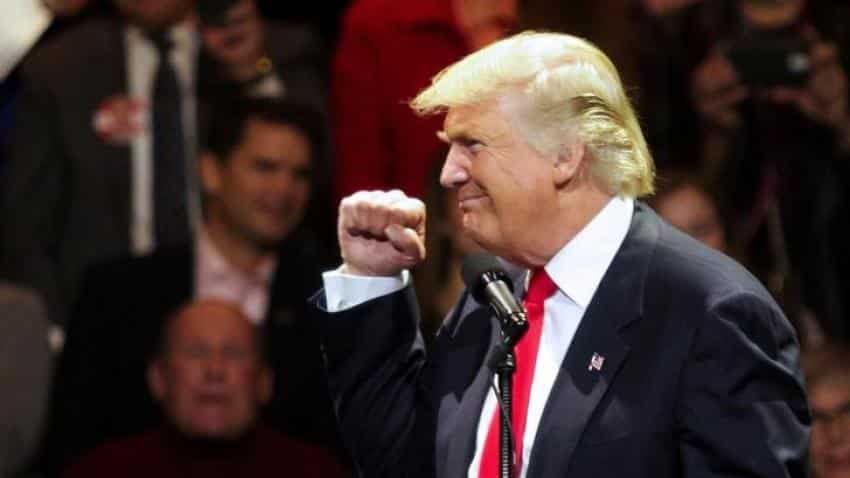 US President-elect Donald Trump speaks at a rally as part of their "USA Thank You Tour 2016" in Cincinnati Image Source: Reuters
Written By: Reuters
RELATED NEWS

The US unemployment rate fell to a nine-year low of 4.6% in November, as employers added another 178,000 jobs, making it almost certain that the US Federal Reserve will raise interest rates later this month.

US non-farm payrolls increased by 178,000 jobs last month after increasing by 142,000 in October, the Labor Department said on Friday.

Economists had forecast payrolls rising by 175,000 last month and the unemployment rate remaining unchanged at 4.9%.

"The decline in the unemployment rate and the unambiguous decrease in labour market slack are likely to place further upward pressure on inflation. This report easily clears the bar for a December rate hike," said Michael Gapen, chief economist at Barclays in New York.

Wages slipped for the first time in nearly a year though after two straight months of increases. Economists partially blamed the drop in average hourly earnings on a calendar quirk, which they expect US Fed officials will overlook at their December 13 and 14 policy meeting.

Last month`s drop in wages lowered the year-on-year gain to 2.5% in November from October`s 2.8% increase, which was the largest rise in nearly seven-and-half-years.

"This is likely to be a temporary setback, as further tightening in labour market conditions should increase competition for skilled labour and support stronger wage growth," said Jim Baird, chief investment officer at Plante Moran Financial Advisors in Kalamazoo, Michigan.

A broad measure of unemployment, that includes people who want to work but have given up searching and those working part-time because they cannot find full-time employment, fell two-tenths of a percentage point to 9.3%, the lowest level since April 2008.

After a rally of about 6.0% in the past three weeks, US stocks ended little changed in the wake of the jobs data on Friday.

US Treasury bond yields on Friday eased from multi-month highs after the worst sell-off in debt markets in nearly eight years following the election of Donald Trump as US president in early November.

Trump`s plan to increase infrastructure spending and cut taxes could encourage companies to boost hiring and spur an even faster pace of economic growth over the coming years, analysts said.

Fed Chair Janet Yellen has said the economy needs to create just under 100,000 jobs a month to keep up with growth in the working-age population.

"It is not that firms aren`t trying to hire, they just cannot find qualified workers at the wages they want to pay," said Joel Naroff, chief economist at Naroff Economic Advisors in Holland, Pennsylvania.

The jobs report added to data on consumer spending, the housing market and manufacturing in suggesting the economy continued to gain momentum in the fourth quarter after output rose at its fastest pace in two years in the third quarter.

About 226,000 people dropped out of the labour force last month. As a result, the labour participation rate, or the share of working-age Americans who are employed or at least looking for a job, fell 0.1% point to 62.7%.

The retail sector shed 8,300 jobs in November, which could reflect a shift toward online shopping that has forced department stores such as Macy`s Inc to close several stores. Retail jobs have declined for two straight months.

Government employment gained 22,000 jobs. There was a surge in local government hiring, which could have been driven by the November 8 US election.