US job growth surged in January, with employers hiring the most workers in 11 months, pointing to underlying strength in the economy despite a darkening outlook that has left the Federal Reserve wary about more interest rate hikes this year. 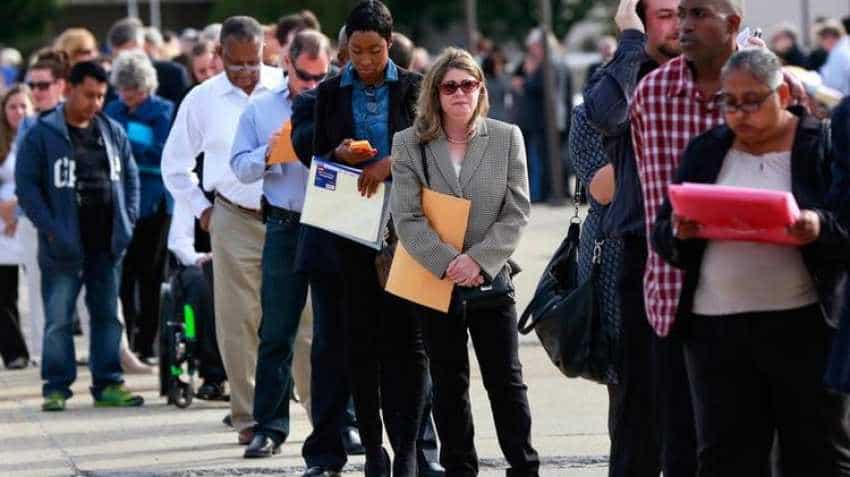 US job growth surged in January, with employers hiring the most workers in 11 months, pointing to underlying strength in the economy despite a darkening outlook that has left the Federal Reserve wary about more interest rate hikes this year. The Labor Department`s closely watched monthly employment report on Friday showed no "discernible" impact on job growth from a 35-day partial government shutdown. But the longest shutdown in history, which ended a week ago, pushed up the unemployment rate to a seven-month high of 4.0 percent.

The report came two days after the Fed signaled its three-year interest rate hike campaign might be ending because of rising headwinds to the economy, including financial market volatility and slowing global growth.  "The Fed chickened out on further rate hikes this year and boy are they ever misreading the tea leaves on where the economy is going next," said Chris Rupkey, chief economist at MUFG in New York. "U.S. companies have not let up one bit on their hiring in response to risks out there in the world economy."

Nonfarm payrolls jumped by 304,000 jobs last month, the largest gain since February 2018, the Labor Department said. Job growth was boosted by hiring at construction sites, retailers and business services as well as at restaurants, hotels and amusement parks. But the economy added 70,000 fewer jobs than previously reported in November and December. Economists polled by Reuters had forecast payrolls increasing by 165,000 jobs in January. Roughly 100,000 per month are needed to keep up with growth in the working-age population.

January marked 100 straight months of job gains.  The government shutdown saw about 380,000 workers furloughed but President Donald Trump signed a law guaranteeing these employees back pay. As a result, these workers were included in the survey of employers from which the payrolls number is calculated.

The furloughed workers were, however, considered unemployed on "temporary layoff" in the separate survey of households from which the jobless rate is derived. This lifted the unemployment rate by one-tenth of a percentage point from 3.9 percent in December. The shutdown ended last Friday after Trump and Congress agreed to temporary government funding, without money for his U.S.-Mexico border wall. The dollar rose against the euro and the yen after the employment report, while U.S. Treasury prices fell. U.S. stock futures reversed losses.

MONTHLY WAGES GAINS SLOW
Average hourly earnings rose three cents, or 0.1 percent in January after accelerating 0.4 percent in December. That lowered the annual increase in wages to 3.2 percent from 3.3 percent in December. With key data from the Commerce Department, including the fourth-quarter gross domestic product report, still delayed because of the government shutdown, the employment report is the clearest evidence yet that the economy remains on solid ground.

The Fed on Wednesday kept interest rates steady but said it would be patient in raising borrowing costs further this year. The U.S. central bank removed language from its December policy statement that risks to the outlook were "roughly balanced." Clouds have been gathering over the economic expansion, now in its ninth year and the second longest on record, with business and consumer confidence deteriorating in recent months. Confidence has been eroded by the fight over the government budget and Washington`s trade war with Beijing.

Other headwinds to the economy include the fading boost from a $1.5 trillion tax cut, slowing growth in China and Europe, as well as the risk of a disorderly departure by Britain from the European Union. With its January employment report, the government published its annual "benchmark" revisions and updated the formulas it uses to smooth the data for regular seasonal fluctuations. It also incorporated new population estimates.

The government said the level of employment in March of last year was 1,000 lower on a seasonally adjusted basis than it had reported. The shift in population controls had no impact on the unemployment and labor force participation rates. A broader measure of unemployment, which includes people who want to work but have given up searching and those working part-time because they cannot find full-time employment, jumped to an 11-month high of 8.1 percent from 7.6 percent in January. It was boosted by the government shutdown.

Job growth increased broadly in January. Employment at construction sites surged 52,000, the most since February 2018, after increasing 28,000 in December. Hiring was likely boosted by mild temperatures in January. Manufacturing payrolls increased by 13,000, slowing from December`s 20,000 increase. Employment in the leisure and hospitality sector jumped by 74,000. Retail payrolls rebounded by 20,800 jobs. Professional and business services employment increased by 30,000 jobs last month.

The government added 8,000 jobs last month. There were increases in healthcare, transportation and warehousing employment, as well as financial activities. But utilities and information payrolls fell in January.
The average workweek was unchanged at 34.5 hours in January.