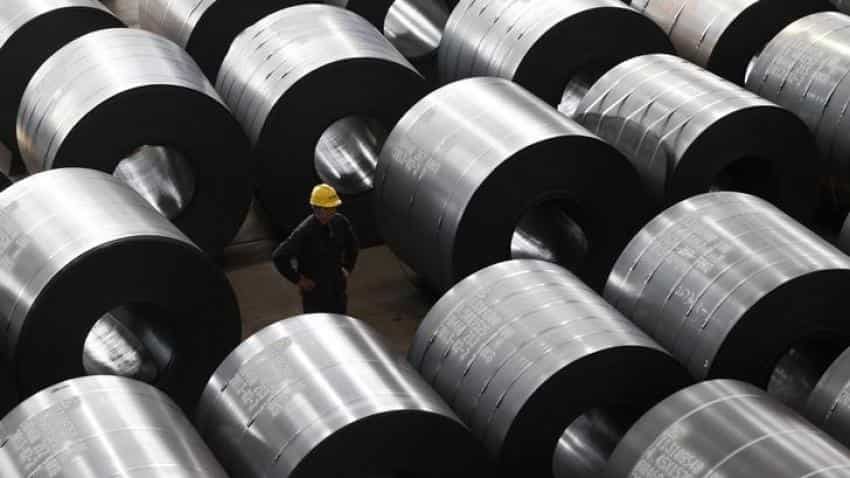 Commerce Secretary Wilbur Ross said Trump would have the final say, including on whether to exclude certain countries, such as NATO allies, from any actions.Image source: Reuters
Written By: Reuters
RELATED NEWS

The U.S. Commerce Department has recommended that President Donald Trump impose steep curbs on steel and aluminum imports from China and other countries ranging from global and country-specific tariffs to broad import quotas, according to proposals released on Friday.

China`s Commerce Ministry responded by saying the report was "baseless" and did not accord with the facts, and that China would take necessary steps to protects its interests if the final decision affects China.

Trump authorized the probes under a 1962 trade law that has not been invoked since 2001. He has until April 11 to announce his decision on steel import curbs and by April 20 to decide on aluminum restrictions.

Commerce Secretary Wilbur Ross emphasized that Trump would have the final say, including on whether to exclude certain countries, such as NATO allies, from any actions.

"The president has the discretion to modify any of these or to come with something totally different," he told reporters on a conference call.

He said a global tariff would cover every steel and aluminum product entering the American market from China.

China`s Commerce Ministry urged the United States to exercise restraint in using trade protection tools, respect the rules of multilateral trade and make a positive contribution to the international economic and trading order.

"If the final U.S. decision affects China`s interests, China must take necessary measures to protect its own reasonable interests," the ministry added, without giving details.

Century Aluminum shares closed up 8.3 percent, while Alcoa, which has operations across the globe, ended off 0.44 percent.

Alcoa said in a statement the U.S. trade actions should focus on Chinese overcapacity and not penalize nations that abide by the rules.

Ross said he would not be surprised if countries challenged the measures at the World Trade Organization.

He said "there has been no dialing back" of the recommendations due to objections from industries that use steel and aluminum.

"The objective of both reports is to get the production up to a level which will result, in our judgment, in the long term viability of each industry," Ross said, adding that he did not believe that the recommendations would lead to significant price hikes.

U.S. Senate Democratic leader Chuck Schumer said he hoped the proposals "are the beginning of efforts by this administration to finally get tough on China."

Other countries would be subject to a quota limiting their tariff-free access equal to their 2017 steel exports to the United States.

The country-specific aluminum option would impose a 23.6 percent tariff on all products from China, Hong Kong, Russia, Venezuela and Vietnam. All others would be subject to quotas equal to their 2017 exports to the United States.

A third option called for Trump to impose global quotas based on 63 percent of each country`s 2017 steel exports and based on 87 percent of their aluminum exports to the United States.

South Korea`s trade ministry said in a statement that it had met with executives from steel makers and agreed to make outreach efforts until Washington makes a final decision.

Separately, Seoul plans to take a dispute to the World Trade Organization against the United States for imposing high anti-dumping duties on the country`s steel products.

Ross said the remedies were designed to raise U.S. capacity utilization to about 80 percent for each industry, from the current 48 percent in aluminum and 73 percent in steel.

"That is the level we believe would provide the industry with long term viability," he said.

Some U.S. companies will be able to request exclusions for specific products if the U.S. lacks sufficient domestic capacity or for national security considerations, Ross added.

Philip Bell, president of the Steel Manufacturers Association, welcomed the proposals saying they could be "meaningful and effective" in tackling global excess capacity and relentless steel imports.

"If these tariffs are imposed, the U.S. will become an island of high steel prices resulting in our customers simply importing the finished part and threatening thousands of jobs," the groups said.

"Utilizing a blanket tariff is too broad, in our view," they said. "There is a higher level of precision needed than a blanket tariff because depending on the product spread, it could for instance knock out one product, and do little to nothing for another."

Trump met with a bipartisan group of U.S. senators and representatives at the White House last week, signaling he would take at least some action to restrict imports of the two metals.

Some U.S. lawmakers and steel and aluminum users have urged caution in any restrictions to avoid disruptions or price spikes in the raw materials, used in everything from autos to appliances and aircraft and construction.